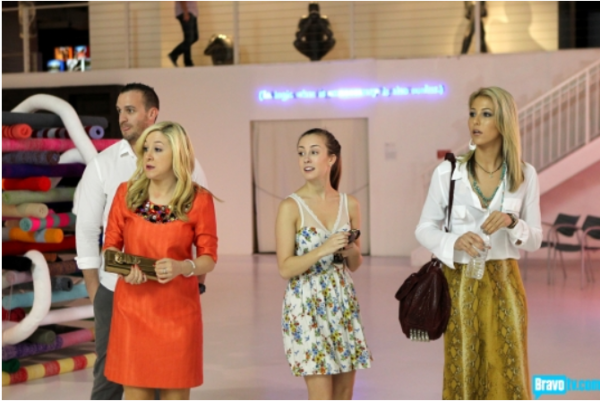 Just an average day at the Margulies Collection.

This week I had the pleasure of watching ‘Gallery Girls’ with my parents.  Any hope I had that they might find the show entertaining was dashed when the credits started rolling.  Immediately, my dad asked, “Is it over?” and when I replied that yes that is usually what credits mean he blurted out, “OH THANK GOD.”  He later told me he found it ridiculous that all the girls hated each other for no reason.  Go figure.  I’m assuming he is not in the minority of men who have thought or said this after being forced to watch ‘Gallery Girls’ by a family member or significant other, but I digress.

We begin ‘Gallery Girls’ episode six with a very uncomfortable conversation between Sharon and Amy.  Sharon begins by asking Amy how she feels her internship is going.  RED ALERT AMY.  That is never a good intro question.  I’ve been asked many a time how I feel something went and it always can be interpreted as “I want to hear all the positive things you have to say about this and then I’m going to tell you why you’re COMPLETELY AND TOTALLY WRONG.”  After hearing all the lovely things Amy has to say about working for her, Sharon then brings up the list Amy gave Kerri, says it was unacceptable and fires her.  The best part of this segment was Amy’s sideline: “Fire me from WHAT?  My free internship??”  Hahaha!  But actually yes.

In order to prove Sharon wrong (atta girl!), Amy decides to practically beg Claudia and Angela to collaborate with her on a pop-up gallery at Basel Miami.  While the two of them are all for it, when Claudia told Chantal the news, Chantal said noooo that sounds like work and then burst into tears.  During this very unexpected mental break, Chantal told Claudia that she needed to “focus” and get off “the Adderall”, which my pharmacist mother found hilarious since you put people on Adderall to get them to focus.  Prescription drug humor, teehee!

Once everyone heads off to Miami, we find out that the EOC girls have ‘decided’ to go ahead with the pop-up.  And by go head with it I mean that everyone has decided to let Amy and Claudia do all the work while the other two girls just go along for the ride.  As if Chantal hasn’t already gotten enough bad press, she made it worse for herself at Amy’s house.  Amy being desperate to please the EOC girls and make them her friends, gave the girls a tour of her family home, accompanied by a big breakfast by the pool.  While we watched Claudia try (and fail) to smoke a cigar, Chantal dotted the conversation with little quips such as “You don’t have soy milk do you??” and “I still need real coffee. This was like Folgers…”  Claudia is clearly gunning to win Miss. Congeniality. 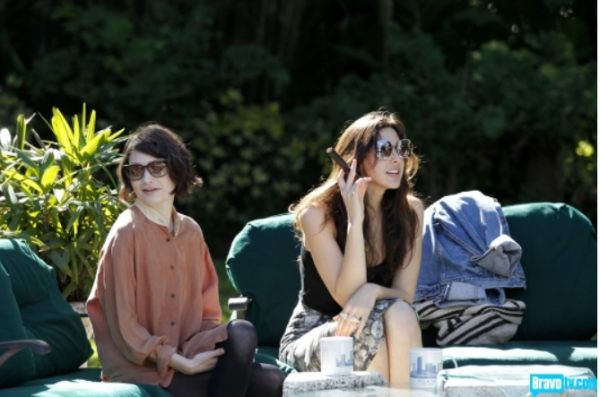 “Ughh, I have fabulous taste, I can’t drink Folgers!”

The EOC girls did eventually pick out a venue for their pop-up that had no walls, or easels, or garment racks etc to actually show off their merchandise, but I’m assuming that little drama will be sorted out next week.  Or the girls might just end up hosting a Basel party free of anything EOC related.  On another note, we were introduced to the latest Bravo catchphrase by Angela who coined “LamD” or “Look at me device.”  I wouldn’t mention it except this was genuinely the biggest contribution Angela had this episode.  Who needs a fabulous body of work??  Angela’s got big hats!!

As for Liz, we mostly got to see her talk about how her dad doesn’t spend time with her and attempt to totally ignore Chantal and Claudia at two different social events while befriending Angela.  A mean feat (literally) since the three girls were basically attached at the hip.  Oh and we got to watch a horrible segment where Liz got a bikini wax.  I really, really, really didn’t need to see that Bravo.  HOWEVER, we did get a fabulous tour of her dad’s warehouse filled with work by Ernesto Neto and others.  I quite liked this episode because it did dish out art AND drama in spades.

I have to tell you, the morning after watching ‘Gallery Girls’, my parents and I went out to breakfast.  Even though my dad had claimed to thoroughly not enjoy himself during our little viewing party, out of the blue during breakfast he said, “I want to see what Claudia’s pop-up looks like next week.”  I think I might have found dad’s latest guilty-pleasure, ha.

Next week on ‘Gallery Girls’:

The EOC girls let Amy set up their entire pop-up.  And then no one shows up….Maggie and friends party too much and Liz doesn’t like it….Amy finds out her free apartment is getting sold and she gets the “Can you support yourself?” convo.  Uh oh…And Claudia goes back to crying over spilled $$$.

Go Casey!! Love, love your take on the Gallerey Girls.

Go Casey!! Love, love your take on the Gallery Girls.