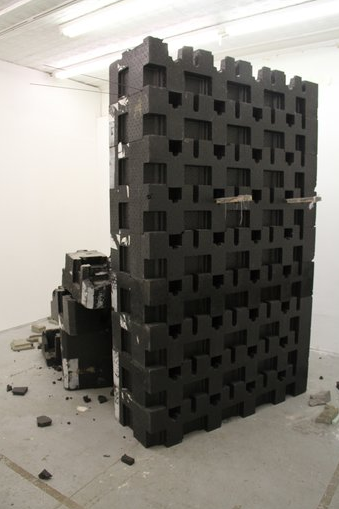 Despite all that’s wrong in this society it’s the responsibility of the new artists to occur. The explanation that the times and the society are bad is pointless. Probably they’ve always been and the issue is whether too bad or a little better. The reason for doing nothing is always wrong. There is also the responsibility of the older artists to uphold a high quality. At present they do this in their own work, but not otherwise… There is a limit to the use of art and art doesn’t tolerate frivolity and abuse.

Donald Judd from “… not about masterpieces but why there are so few of them,” Art in America, September 1984

Last weekend, Oliver Francis Gallery opened up a new group show called SNaFu, an acronym which is fairly familiar — it stands for Situation Normal: All Fucked Up. It’s a military term, as you know, that describes an operation gone all wrong, though one is loathe to admit it.

I regret that I didn’t make it out to the show’s opening last weekend, as I admire the work of a number of artists in the show. The requisite OFG fan comments and like-lists on Facebook indicated that the gallery might yet again have redefined something totally slight in some really intense and hip way. But I also witnessed the deep existential funk it put a number of other artist friends into — a head-scratching, what-have-we-done sort of malaise that fed, over time, a kind of seething that led to action: those friends posted a review of the show up on 4chan, a website whose nature is so meta that when I was introduced to it this week my head blew up a little.

My friend Bradly Brown described 4chan as “brilliant and totally terrifying,” in no small part because the virtual space of the site is so layered with digital insider codification that it serves as malignant picture of our age — a system ripe with geniuses and fools all tangled up together in a seething mess of one-upmanship and blather. But there’s poignancy in that, don’t get me wrong.  4chan is fertile ground and artists, including many that show work and attend openings at OFG, use 4chan as an art source book.

Anyway. I’ve gotten a little sideways of the point.

Artists Bradly Brown and Shelby Meier posted a review of SNaFu up on 4chan, written in 4chan language. The review was negative, as this excerpt indicates:

>no exciting artwork
>not smart enough
>not crazy enough
>nothing of substance
>everything is boring
>artforum copy pasta
>partyart.pdf
>tracyeminswannabes.zip

But you know the saying “no press is bad press?” It’s true! OFG gallery owner and all around nice guy, Kevin Jacobs, gleefully linked to the ephemeral review (there are no archives on 4chan) on Facebook — “BEST THING EVER!! Review of SNaFu on 4CHAN!!!!!!”

I guess you can only throw cupcakes at OFG.

So here, to add to the cupcake barrage, is the video Bradly Brown made of the party at OFG the night of the SNaFu opening. Someone always ends up dancing when rum and All Fucked Up are mixed into a cocktail.

OMG_OFG from Bradly Brown on Vimeo.

I love the title of the 4chan review: Situation Normal: As Fucking Usual.

I was there at the opening and there was a great turn-out–lots of energy and free-flowing booze. I LOVED the film negatives on the floor. (kind of shaped like a mobius strip). Totally beautiful and people kept stepping on them. Kochran’s piece was also strong. When I think about how Snafu has been appropriated into our vernacular, it has come to mean *mistake*, but not in an irreversible or catastrophic way. I appreciated the artists’ gestures in this regard. Something that is off–but not catastrophically off. A bit stronger than a faux-pas.

As a frequent lurker of 4chan’s /ic/ board, I feel qualified to note that making a negative pitch to the board was a surefire way to accrue kudos and attaboys for “skewering those intellectually bunk charlatans” as a more eloquent poster might put it. Considering the board’s population is largely comprised of a bunch of atelier dropouts and CalArts rejects obsessed with figuration as dictated by Andrew Loomis and no doubt carrying a Stuckist mug in their cabinet, it’s essentially board culture and even more “business as usual” to >greentext and sneer at the OFG show. Ho hum.