Unpopular opinion alert: I actually like the Dallas Art Fair. It is fairly laid back, most dealers will talk to you about the work if you ask, and every once in a while one can see a nice piece of art. It is easy – one doesn’t have to drive to a million different places; it is all laid out for you. However, the real reason I like the art fair is that it gives everyone else in Dallas an excuse to bust out their A-game. The galleries show their strongest work. The art institutions have some of their biggest shows. The agitators, collectives, and project spaces present fun alternatives to the commerce-driven spectacle. Everyone realizes that this is one of only two times a year that people from all over the country come to Dallas to look at art. I enjoy seeing my art scene wearing its Sunday best. I hope everyone who comes for the Fair makes the effort to go off the beaten trail, go to a space they have never been to before, and fall in love with this dynamic, open-hearted, exciting city. 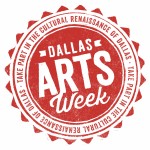 This panel featuring Anne Bothwell, Linnea Glatt, Sally Glass, Morehshin Allahyari, Katherine Owens, and Letitia Huckaby, has already produced conversation concerning its lack of males and latinos. The context is that last years inaugural creative conversation featured all mostly white males, and the Mayor received significant criticism for that. The response to have an all female panel the following year seems a bit off. Regardless there are some very knowledgeable and interesting panelists and the conversation should be rich and possibly explosive. If something interesting happens at this panel, expect it to come up often during the rest of the fair week. 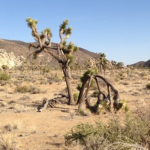 Some people believe the Dallas Art Fair starts on Friday. Those people are wrong. March 27th was the official kick off to Fair Season at Neiman Marcus. Also Tuesday April 8th there will be some video programming at Ft. Worth’s Coyote Drive-In. However, it is the Power Station opening, this year featuring work by Fredrik Vaerslev that for many mark the official start of the Dallas Art Fair. It is also an opportunity to get to know the Expo Park/East Dallas/Fair Park area which will be a hotbed of art activity throughout the week. 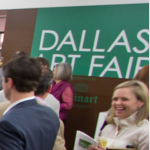 If you like to dress up, be around wealthy people or a certain type of artist, if you like great champagne, if you like a party, if you like suits, dresses, and high heels, then you will like the Preview Gala. If that sounds like torture for you then just ignore it. The tickets are a steep $250 per person. 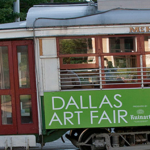 Are you tired yet? Are you hung over from the Gala? Are you just getting into town? Well, stock up on 5 Hour Energy or Red Bull – this is officially the first day of Dallas Art Fair. Most importantly this is the day you can see the Art Fair for free. It is super simple. Go to the Art Fair’s ticketing page. Select a one-day ticket for Friday. Enter the code DAFProfessional2014, and viola. You have a free ticket to the art fair.

This is important because you don’t want to miss a guided tour of the art fair with Glasstire editor, Bill Davenport at 1:30 p.m. The Art Fair is massive, and having someone to help walk you through it is a big help; having someone funny, knowledgeable, and laid back is even better.

Also, don’t forget to go by The Joule to check out OHWOW radio station, KNOW-WAVE by Aaron Bondaroff. The radio station will be broadcasting live throughout the fair from the Comme des Garcons PLAY storefront at the Joule hotel. They are not booking guests until they arrive in Texas so get at them via social media if you think you have what it takes to get on air. 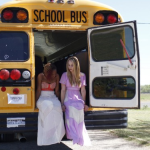 RO2 Gallery is sponsoring the Barona Bus project by artist Leah Foster. The converted 76-passenger school bus, which is travelling from Dilley, TX to New York City, will be parked at various locations throughout the Arts District during the Fair. Various art groups and artists will be physically manipulating the bus, and hosting panels, readings, and other programming throughout the fair. 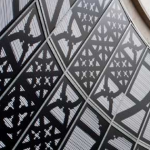 These evening events are in my suggested order of attendance. In fact, if you want to have just the perfect art day/night this is what you should do. Go take a tour with Bill at 1:30, and then wander around for another hour or so at the Fair. Then walk to the DMA around 3:30 – 4 p.m. and check out Nur: Light in Art and Science from the Islamic World. Walk to Klyde Warren Park and get a bite from a food truck, then walk to Nasher Sculpture Center at 6 p.m.

Nasher openings are great. It is just nice to be there in the sculpture garden, and one should spend about 45 minutes enjoying Bettina Pousttchi’s new work. However, even though you might be tempted to just stay at the Nasher, if one wants to hit everything it might be worth peeling out of there around 7 p.m. 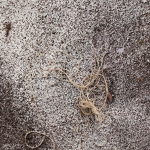 The Dallas Biennial 2014 has been one of the best stories of the year in Dallas. This show at the Goss-Michael Foundation consists of a retrospective of Thomas Lawson’s work spanning over 37 years and group exhibition with work by Conrad Atkinson, Derek Boshier, Joseph Grigely, Stephen Lapthisophon, Adrian Piper, and Martha Rosler, curated by Michael Mazurek and Jesse Morgan Barnett. Definitely worth checking out, and if one spends an hour here to, say, 8 p.m., then there is an interesting choice to make. 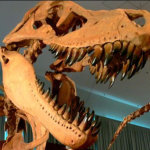 Dinner is a tricky thing. I personally don’t go out to dinner during a night with a lot of openings because it almost always means missing a couple of shows. I try to eat before going out, and sometimes get lucky and run across a reception that provides something to snack on. However, if you ignored my food truck tip earlier and are now starving – this is the window for dinner. If you are still managing fine, then check out the Heritage Luxury Reception. I know nothing about this reception, but have a feeling that it might be worth checking out. I also have a feeling that they might have snacks. They request that you RSVP: [email protected] 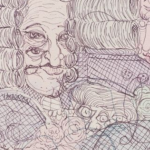 Francisco Moreno’s studio is next door to Oliver Francis Gallery and it is worth going to both shows. Moreno promises to preview his car restoration/painting/performance project and display a series of small paintings that he is calling “debt paintings,” and Oliver Francis Gallery is hosting part of the expansive DB14 with work by Josh Smith and Jose Lerma. This is completely worth the detour from the Design District to East Dallas to come see what some of the most buzzed about names in the Dallas art scene are really about. 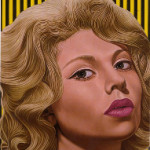 Julian Schnabel is having an opening of new work for the first time in a decade in the United States of America and it is at the Dallas Contemporary. Richard Phillips is showing work as well, and it will be interesting to see what this institution with a penchant for Hollywood glitz and glam does with some real star power.

Hot Tip: If you are looking for an after party try The Crown and Harp, 1914 Greenville Ave. Local favorites Def Rain and Dark Rooms play live downstairs, and Moody Fuqua, DJ Clumsy & Shy, and Taylor Rea of Zhora will be spinning upstairs. $5 cover. 9 – 2 a.m. 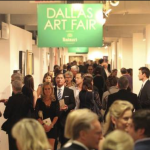 Day two of the fair. This time there are no free passes. However, come show love to the home team: Barry Whistler, Conduit, Cris Worley, Galleri Urbane, RE Gallery, Ro2 Art, Talley Dunn, and Valley House. While you are at it take the time to swing by Circuit 12 and Red Arrow Contemporary galleries in the Design District. Both have excellent shows up, Alexander DiJulio at Circuit 12 and Thomas Riccio at Red Arrow. 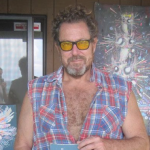 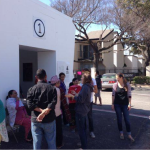 Rick Lowe’s newest social sculpture, Trans.lation Vickery Meadow, celebrates a second year of support from The Nasher Sculpture Center with the opening of three solo shows in its unique White Cube Galleries. Also DaVerse Lounge 2.0, a national award winning poetry open mic with live band Melody Memory founded and hosted by Will Richey, and food from all over the world round out the offerings. Full disclosure: I direct the White Cube Galleries and am an artist-in-residence at Trans.lation. 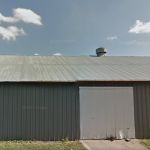 DB14 can’t stop, won’t stop. This time they are taking over a warehouse space in West Dallas. Do yourself a favor and check it out. 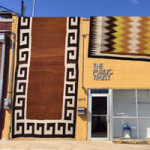 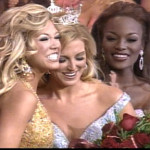 The Stuff of Legends at Gray Matters 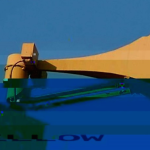 I was able to see the first iteration of the exhibition at UTD main campus a couple weeks ago, and it is a wide ranging effort to showcase work with a political and social bent. The curatorial ambition of this show is worth checking out by itself. I am excited to see how it will exist within the smaller UTD CentralTrak gallery space. Artists include Spike Johnson, Andrew Blanton, Kayla Escobedo, Trenton Doyle Hancock, Gary Panter, Marian Henley, Mike Presley, David Cotterrell, Didier Sornette, Tom.š Rafa, Rudolf Sikora,V.clav Vašků and Jana Želibsk. 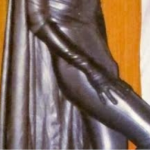 Ware:wolf:haus directed by artist Arthur Pena is one of the most exciting spaces in Dallas. There is a freshness and a sense of freedom that makes the trip over the bridge completely worth it. The show, 5 Guys, features five painters from Houston, TX, Alika Herreshoff, Jonathan Ryan Storm, Lane Hagood, Seth Alverson, Shane Tolbert. 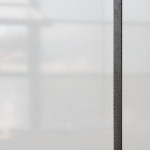 Eli Ping at And Now

Take this opportunity to check out the much-buzzed-about new space by curator James Cope, featuring work by Eli Ping. 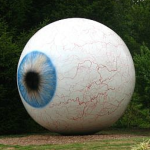 The Eye Ball in Celebration of the Dallas Art Fair

“Eye” on Main Street across from The Joule Hotel.

Who doesn’t want to party under the stare of a giant eyeball? 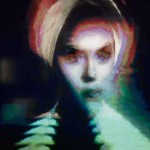 Exegesis: Media and Music at The Union Studio and Gallery

Pariah Productions and the Union Studio & Gallery, occupied by Eli Walker, Kelly Kroener, Frank Darko, & Joshua Shane von Ammon, present an evening of media art and contemporary music–an opportunity for viewers and listeners to find a point of focus after the barrage of the Dallas Art Fair. Michael Alexander Morris and Andrew Blanton will present individual and collaborative performances in a variety of media, from software-augmented 16mm projections to quadraphonic electro-acoustic compositions that use mobile devices as gestural controllers. In addition, there will be a very special presentation of Terry Riley’s seminal composition In C, a key work in the history of minimalist contemporary music, performed by an ensemble organized by Joshua Westerman. 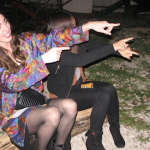 The Rite of Spring at Ash Studios 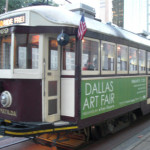 Final day of the art fair. Come back for that one last lingering look. Until next year. When we do it all again.