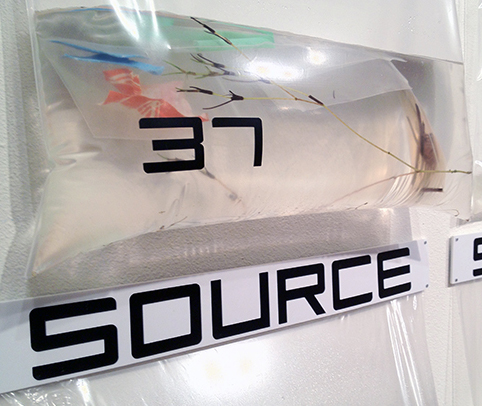 If you’ve been paying attention lately, you know Texas has a bit of a water problem. If you’ve been out of the loop, start with the woes in the little town of Robert Lee (12 miles from where I grew up) or if you’re more big-city, how about Houston’s water coming from Dallas’s wastewater (which may explain why Dallas called Houston the A*Hole of the Universe recently). And if you pick up that even though yes indeed, we’ve had bad droughts before, say back in the 50s, you might also consider that Texas had around 16 million or so less people turning on the faucet at that time.

On the other hand, Texas, as the governor says, is a great place to do business (and a great place for Formula One racing this Fall, TBD). Texas dominates lists of growing cities in the U.S., and if you’ve driven through the Kenedy/Karnes City area lately, you’ve seen evidence of this along the back roads as well. Economic development is generally a good thing. It usually means the arts have a better chance (or one might think despite TCA’s budget cut of 50% last year). But I’m not headed in the direction of why the arts aren’t better funded in one of the country’s fastest growing and economically prosperous states, even though we should probably have that discussion.

I don’t think anyone can deny that growth, in both population and commerce, requires more resources. Texas is booming, but so is the demand for energy and water (see the discussion on possible blackouts in the Lone Star State). And so I also think we can’t deny we’ve got to deal with that somehow.

The Coastal Bend, as an example, is a place that prides itself on its environmental value. The Texas Riviera has glistening sunsets, fascinating wildlife, and unlimited recreational and cultural potential. But you’d be hard-pressed to find easily visible access to recycling. And though there are numbers of individuals and groups committed to keeping areas clean and beautiful, one is always reminded of the encroachment of human activity on the landscape; whether it’s a string of trash along salt flats, abandoned strip malls and housing developments (both old and brand spankin’ new), oil spills or plastic that washes up on shorelines. It’s not a subject especially appealing over wine and trout.

I’m not really sure this area has ever seen much benefit from the idea of recycling first hand. I’m not sure that it’s anyone’s fault. I guess it can be seen as a byproduct of rapid growth coupled with a tradition of never worrying about it much. Recycling just isn’t in the air down here, despite there being good people and organizations focused on the study and care of the Gulf Coast. (And wind farms are popping up everywhere too, don’t get me wrong). 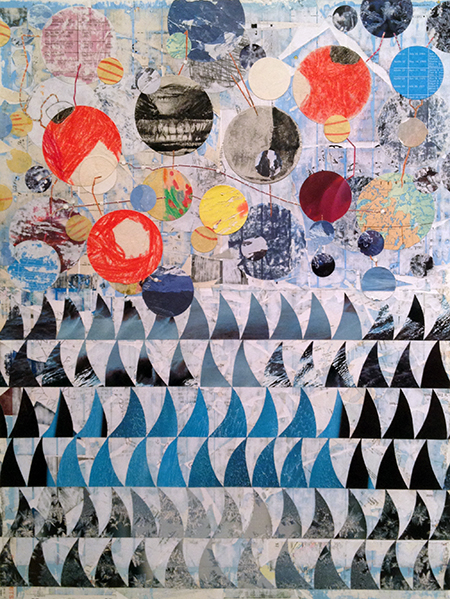 Ai Childress, “Between the Devil and the Deep Blue Sea,” mixed media.

But again, I steer away from the conversation. What I’m getting at is that while we aim to balance our economic development with our natural resources (which has surely been the subject of much art all over the world) it seems like the art — especially in an area where the environment, and in particular water, is kind of a big deal — would be addressing nature not just in a pristine state, but also nature that is shaped and transformed by our activities. In fact, one wouldn’t be so far off as to call this art a kind of realism. So let’s be realistic.

This seems to be the theme of K Space Contemporary’s current group show Watered Down, on view through August 24, 2012 in downtown Corpus Christi. I hoped, while approaching the former Kress building on Starr Street, that the artists would be hitting on this train of thought. (How’s that for biased expectations?) 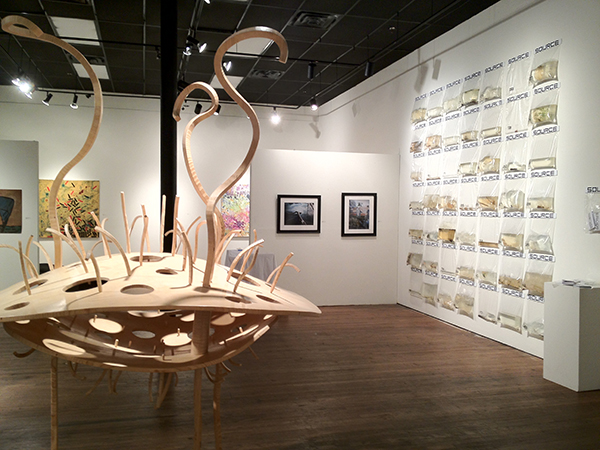 You know, the times when we experience the natural world in an untouched state can be much sought after and treasured. Art can certainly represent and remind us of that. Some of the work in Watered Down however — while perhaps not reminiscent of such worry-free representation — attempts to critically examine a world affected by us, even as we are affected by it. The debate over what that effect is will surely rumble on. (See Why Earthquakes are Shaking North Texas. Next environment-themed show: Fracking Down?) Anyway, I wasn’t disappointed. Though there was a summer art camp for kids going on in the center of the space (that first seemed like a disruption), it actually became part of the experience (more on that later). 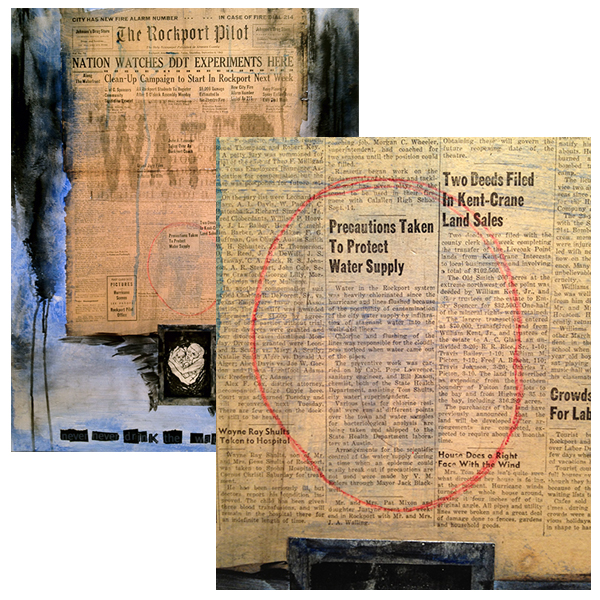 This piece by Becky Smith incorporates a vintage Rockport Pilot edition from 1945. Smith emphasized one of the article’s headlines that read “Precautions Taken to Protect Water Supply” hinting that the effort to maintain water quality certainly isn’t a new problem. This one in particular had to do with chlorine levels after a hurricane clean-up. 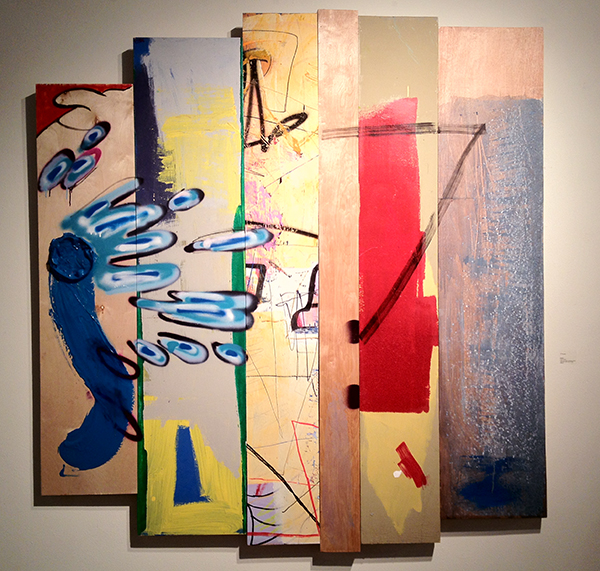 Cande Aguilar’s work is a favorite of mine, as he typically tries to piece together the dissonance of weathered pop/street iconography along the Texas-Mexico Border. He hints at general cultural breakdown with a cacophony of competing visual cues. This piece entitled Elefante (do you see the elephant?) is a nice departure from the standard rectangular and square formats I’m used to seeing, this one made up of separately conjoined wood panels. The title, subtly referring to “the elephant in the room,” (in this case it’s water) also brings up certain figures that when ran through Wikipedia, point perfectly to the cultural mash-up that Aguilar continues to explore, whether Elefante is the last name of the vocalist from Kansas or a member of the board of directors for Dow Jones. I realize those inferences come from added research on the viewer’s part, but hey, if you aren’t doing a little of that, you’re just missing out.

Colette Copeland’s Swarm is a video showing a kind of icky larvae (or something) literally swarming in circles near an embankment on the Aransas river. I have to mention this piece because I happened to be there when it was made, and it’s eerie and beautiful. Copeland was there to film the spot where Chipita Rodriguez was hanged (on Friday the 13th, 1863) and we were about 100 yards away from where a small stadium is set up for annual rattlesnake races. Copeland saw the piece as a metaphor for the spectacle of public execution. It certainly rang of death. I saw this happening on the river’s surface, and when talking about growing population and demand on water resources, well, there you go. 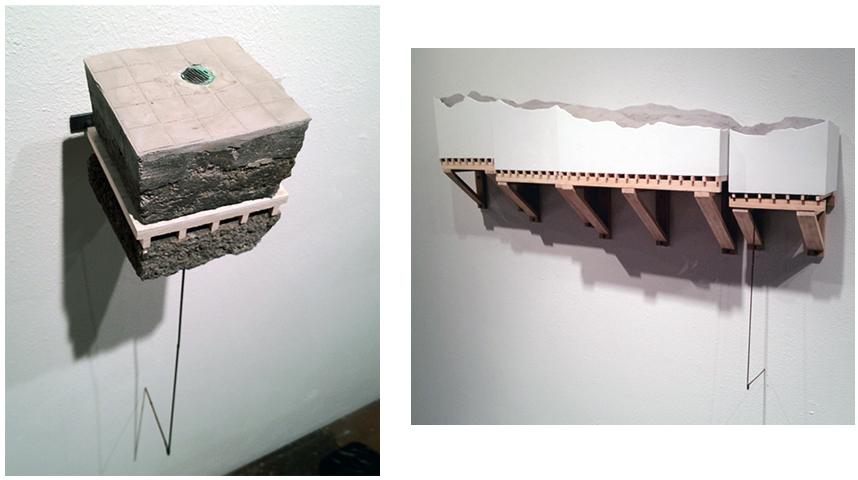 I continually returned to Emily Stergar’s two pieces, meticulously executed. They immediately suggest architectural/construction plans. But on closer inspection, Land Sample XVII looks like it’s been sliced out of the ground from some prefabricated miniature urban scale-model. One notices the drain complete with rust and lime stains, then follows the path water takes below the surface layers, disappearing into the wall. Her other piece, Man-Made Land was similar, but sort of reverses the layers, putting the natural forms of mountainous landscape on top with white-cubed foundations below. Marvelous. I kept looking at these and thinking about the vast infrastructure that the convenience of water requires, and of that model town that was in the attic in Beetlejuice. 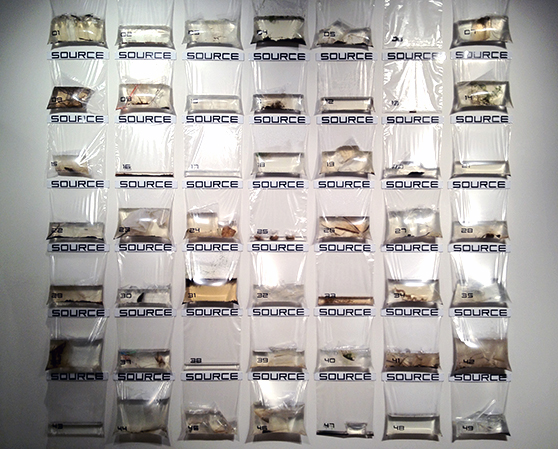 Nameless  Shapeless  Borderless is an installation composed of large plastic bags full of water from sources all over Texas.  As Stergar’s pieces referred to hardscape and directing the path of water, this collaborative work by Rachel/Daedalus Crist/Hoffman puts the actual stuff on the wall. We see it for ourselves, and whether or not we know what we’re looking at scientifically, the insinuation is that we don’t need to. Just look at it. It’s an impressive sampling of the state’s water displayed in a repetitive, typological style. A pedestal with reference cards points to where the water was sampled (Nueces River, Colorado River, etc.) in addition to a sound piece that accompanies each location. I thought the sound piece was the least effective part of the installation, wishing it was presented differently or even on its own perhaps.

I could have just been distracted by kids talking and laughing in the background, having a grand time cutting and gluing. They had stuff spread out all over the place. Which brings me back to that. Kids are messy. In fact, artists are messy. Paint, paper, wood, water, everything. Artists pile up trash, toss out cigarette butts, leave faucets running… hell let’s not even get into the chemicals that used to swish around in darkrooms. We used to say you could develop photographs in the Gennesee River outside Rochester because of Kodak. People are messy.

All that said, I was happy to see young artists happy — working in a space surrounded by art that was about the real world they are inheriting.  They may not comprehend all that was being suggested by the show, but it’s important to pass on that art can face a complex problem, bring it out of political darkness and into a space where it can simply be observed. And I got over the idea that I should be in a quiet, pristine gallery space so I could absorb the art undistracted. Frankly, it’s just not always that realistic.

John Aäsp is currently Visual Arts Director at Rockport Center for the Arts on the Gulf Coast of Texas, where he also serves as Managing Director of the Rockport Film Festival. He received his MFA from RIT in 2006. Other than writing, making art and electro-beepy music, John can’t stop making excuses for his cats and his love for motorsports.

John, I really appreciated how you contextualized the state’s water and environmental issues as a lens to think about the exhibit theme and artists’ work. Very interesting read!

I am unable to attend the show in person, so your post is a very welcome surprise! Thank you for the insightful perspective on the show in observing how artists are addressing aspects of the allocation, consumption, preservation, and corruption of water. It would seem your “biased expectations” were justified!

I found your story very well written, quite interesting. I never read it from beginning to end until just now. You know what one of the most important inventions in the 1900s was…the flush toilet. But also, one of the most disgusting! Whoever thought to flush our excrement, and later, diapers, sanitary napkins, cigarettes,vitamins, household cleaning agents, paints, etc. into the public water system? Even animals refuse to sully their water supply…