Look, these are all gonna be iPhone photos. I’m sorry about that. Soon as I can, I plan to purchase a real camera, but meanwhile, this is what I’ve got to work with. Also, I’m posting this as fast as I can because it’s timely. Part 2 will come this evening, as I have to get back to the Austin Film Festival, which is also happening this weekend.

The Texas Contemporary Art Fair is still going on as of posting time, so if you’re reading this on Sunday morning —— WHAT ARE YOU WAITING FOR?!!

Actually, I hate being told what to do, so sorry about that. Go if you have a mind to, don’t if you don’t wanna, I’ve prepared  some observations. OK, so you can then let loose on me in. re. your thoughts in the comments.

I arrived at the George Brown Convention Center early Thursday evening with a trunk-full of tequila that I’d picked up the day before from Austin  — and then  delivered at the George Brown Convention Center. I’m not sure who made this tequila. Republic? Anyhow it was for an Ol’ West cantina thing Glasstire set up for the opening party. Glasstire staff also wore “Western wear,” which in my case meant a giant blue sombrero. I saw Kelly Klaasmeyer gently leading Sugar, a controversial miniature horse, into the fray. I’d been in traffic for about two hours. To watch one’s editor semi-holler “Hey FISCH!” whilst wrangling NOT A PONY, mind you, but a miniature horse – seldom in the annals of freelancerhood does such a joy arise.

Also, very seldom do I get the chance to wear my sombrero, so I did. It was a hit with the venue employees and, seemingly, the people at Texas Contemporary who were either from Texas or from other countries. It seemed to make regular Americans nervous. This is a a very unscientific study based on people looking startled or engaging me about the hat.

The demographics of this party were mostly white and wealthy-looking, trending over-40, very few people of color except people who worked in the building, and one horse.

Here is a photo of Sugar, the miniature horse. 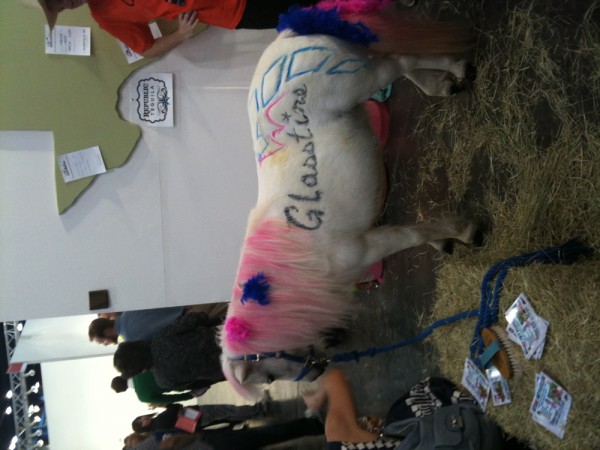 DANGIT, I can’t seem to get that photo oriented in the right way, and I want to be quick about this. Sugar was a controversial figure at Texas Contemporary, with some concerned onlookers and Facebook posters pointing out that Sugar has no voice and no choice, and they have a point. I know horses well, though, and as horses for hire go, she seemed pretty content. She munched hay, her ears were relaxed, she appeared a little disdainful but I’m personifying her maybe too much . Cowboy Mike, her keeper person, did her up with the pink mane and all, even though I think Kelly told him that she didn’t need it. Sugar did poop on the floor, but it was at the end of the night. 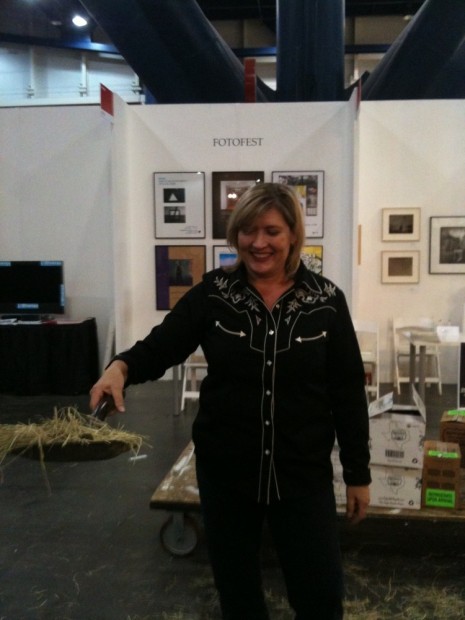 Kelly Klaasmeyer, literally shoveling horseshit. Literally used correctly. She was OK with it.

I do understand the objections of those who disapprove of working animals, and who champion animals rights. But what must they make of THIS:! 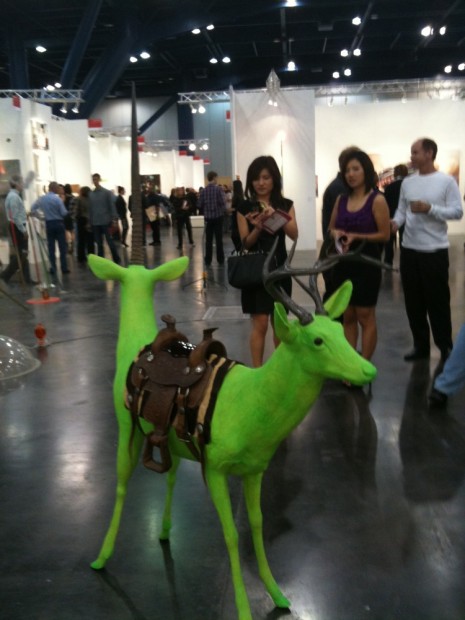 AAAAAAAAGGHH! Actually, what kind of world are we living in that I feel like I've seen this a hundred times?

AAAAA-NY WAY, check it out: 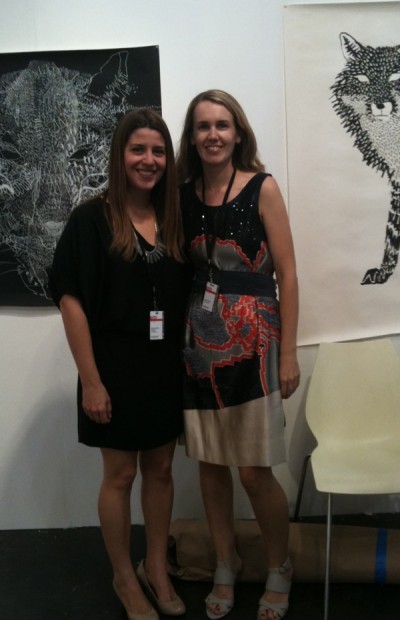 On the left, Champion gallerina Annie, whose last name I didn’t write down (e-mail it to me of you see this, Annie, and I’ll amend post).

I was excited to make the acquaintance of Sonia Dutton, a sharp and thoughtful curator whose Austin-based gallery Champion Contemporary made a really impressive showing. Among the artists in Champion’s roster are London-based video artist Ben Rivers, Dutch painter Jan Wattjes, and Jules Buck Jones, a Texas artist whose muscular, visceral, unapologetically straightforward drawings of animals, notably alligators, always intrigue and fascinate me. He makes drawings with massive intelligence and sure-footed instinct; the first time I saw a drawing of his, at the Blue Star, it dragged me across the room just as keenly and quickly as an alligator would. That’s kind of a tortured analogy but you see what I’m getting at.

Jules Buck Jones also has one of the best artist statements I’ve ever read; it opens

My work deals with animals. The depiction of animals through drawing and lore is as ancient as the imagination. The impressions and ideas they provoke range from symbolism to science. I make large scale, 2-dimensioal drawings, sometimes bizarre and fantastic, other times simple and subtle. All of this stems from a long interest in the natural sciences. The work grows from thoughts and research on biological and ecological concerns as well as along narrative and mythical dimensions.

Dutton and Annie are standing, in that photo, in front of this: 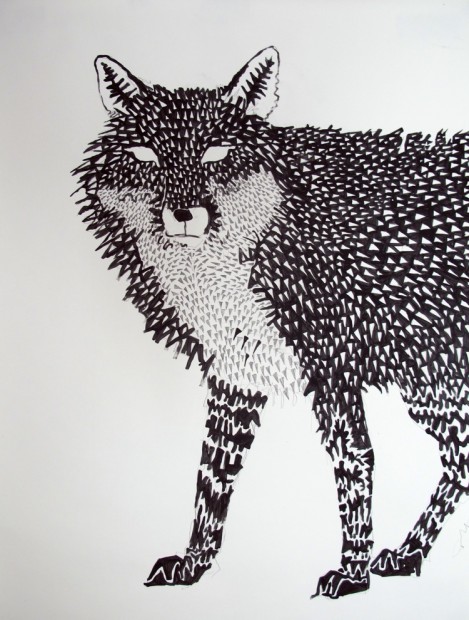 …and another one the title of which I don’t know. The fox, though, is not my favorite of Jones’, given that he can do this: 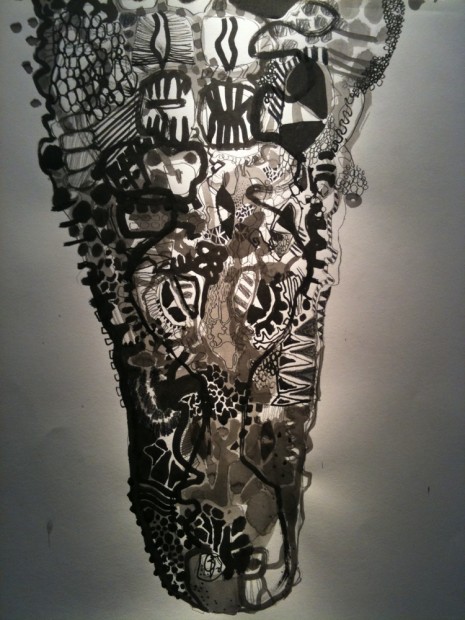 Jones has impressed upon me so strongly that I thought of his work while watching Cave of Forgotten Dreams. His animism, informed as it is by contemporary environmental concerns but rooted so surely in a universal subconscious, feels fresh and clear and universal.

It was good to see the strength of the Texas galleries, in general. David Shelton (in the interest of full disclosure: he’s also a friend of mine and my ex-next door neighbor) did a tremendous job exhibiting his artists, which include Kelly O’Connor, Cruz Ortiz, Sara Frantz (whose show is about to go up in his San Antonio gallery), and the tremendous Austin-based Dan Sutherland, whose painting of clouds on show made me salivate, just about. That thing is GORGEOUS. I can’t find an image of it to show you, I’ll put one up when I can. 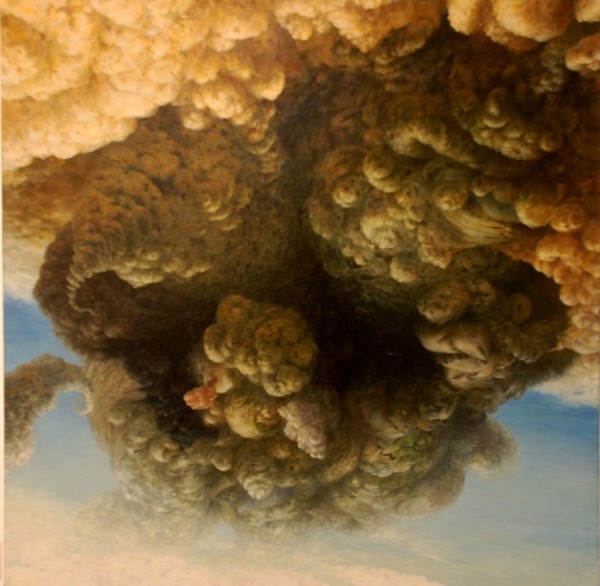 I do have an image from Vincent Valdez’ stunning drawing series, though. 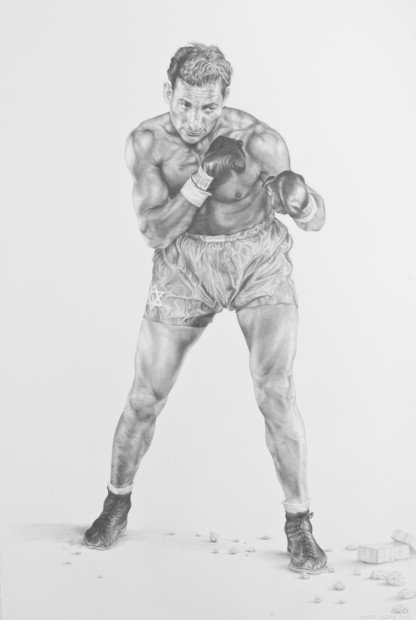 One in a series of boxers.

Shelton showed the series together and apart, in its own enclosure, which was smart.

I gotta go to a brunch. Hopefully this has given you 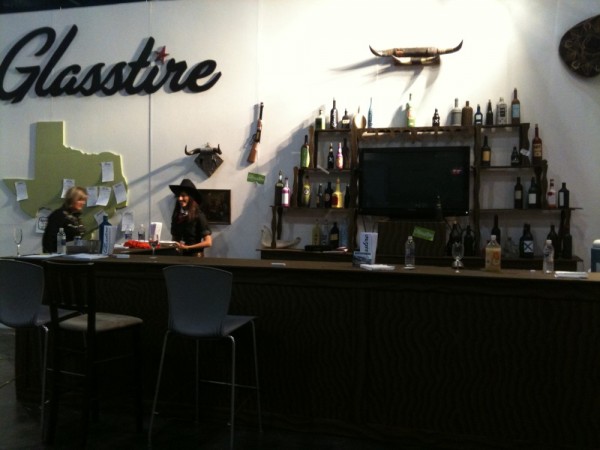 some idea. Tonight I’ll tell you tales of my Texas Contemporary qualms! I HAVE SEVERAL.

hi sarah. thanks for writing! i liked hearing what you had to say. did you know that alligator drawing got stolen from the fair? isn’t that fucked? anyways. thanks again.
JBJ