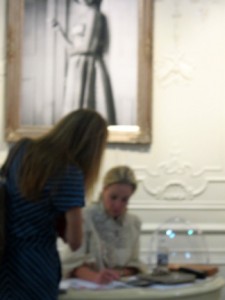 Somebody presumably buying something from someone at the Houston Art Fair

Until Thursday September 15, I had never once been to an art fair.  I find this astonishing since I am 55.  I once had a piece in an art fair that was held in a hotel, with each vendor displaying the work from his or her gallery in hotel rooms.  I like to imagine that in between visits, the gallerists would lie on their beds, channel surfing the TVs.  For some reason at that particular art fair, my gallery couldn’t properly hang my artwork, and it was kept under a table, like a smutty magazine, which only those in the know were allowed to see. 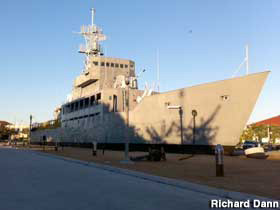 Rather than being held in a hotel, the Houston Art Fair (September 15 – 18, 2011) took place in what for many years I mistook for a gigantic landlocked ship, the George R. Brown Convention Center.  The last time I was in the convention center was right after Katrina, and at the time it was filled full of scared, worried, mainly people of color who had just lost their homes, possessions, and in some cases the ones that they loved.

As one might imagine, the Houston Art Fair attracted a very different crowd, most of whom did not seem in any great hurry to inquire about social services.

I went to the HAF preview party on Thursday night with a friend, and then back to the fair the following day by myself.  Both times I went with a goal – how I can discuss the Fair in a way that nobody else has? Christina Rees covered the wealth and consumerism aspect; Kelly Klaasmeyer did a sneak peak; the GT Contributors did a live blog. What on earth was left to talk about?

After mulling over it for a while, I came up with a list of possibilities, which I would like to share with you.  They are as follows:

1. The Correlation between Frequency of Reconstructive Surgery and Diminishment of Aesthetic. 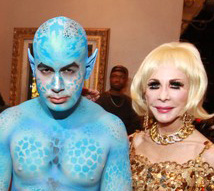 I considered this topic after I saw one of the Farbs at the Fair. I think it was Diane Lokey Farb, rather than Caroline, because I saw her entire face, not just the good side.

2.  How Can I Take Some Money Off Those Artworks Without Being Noticed?

Seriously, I don’t get paid until the end of the month. 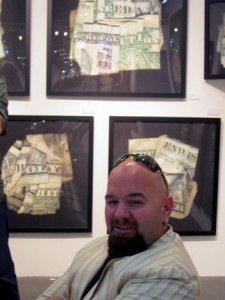 Mr. Ferrera, Can You Spare A Dime

I asked Jonathan Ferrara of Jonathan Ferrera Gallery if people had to pay in equally large bills when they bought Dan Taque’s work.

I bet nobody has ever asked him that before.

3.  The German Aesthetic: Didn’t WWII Teach Them Anything? 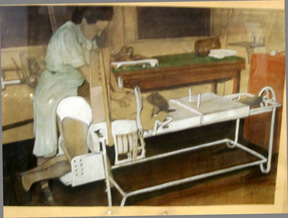 I don’t know who made this because the Germans forgot their tags. Which means they aren’t real Germans.

You know how some people look just like their dogs?  Did you ever notice how a lot of gallery owners look exactly like the artwork they sell? 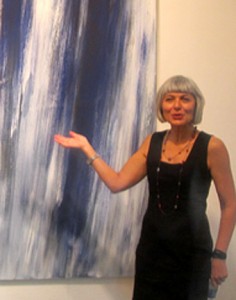 Sonia Roesch and a painting by Raimund Girke. Sonja’s on the right. Or is it the left. 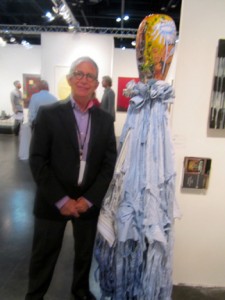 Duane Reed and a sculpture by Michael Lucero.

On the second day, when I was visiting the fair on my own, I decided to get serious, and started asking people about the merchandise they sold in their booths.

One of my first stops was at Pan American Art Projects of Miami, Florida.  I asked its president, Mr. Robert Borlenghi about the title of a Kehinde Wiley painting hanging outside of his space.  The painting, Portrait of A Lady, depicts a young man holding a turquoise glove and dressed in white Sean John attire; his stance is most likely inspired by the image Napoleon in His Study by Jacques-Louis David. 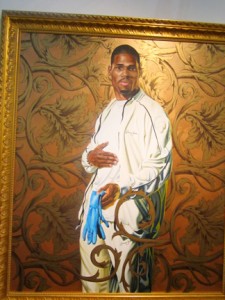 Portrait of a Lady by Kehinde Wiley

In regards to Wiley’s title, Mr. Borlenghi told me that there was much discussion over many a dinner and board meeting about why the artist chose to call it such a thing, and finally after several months went by, they concluded that the very simple answer to the question was because, and I quote, “Kehinde Wiley is a homosexual.”

Is Mr. Borlenghi telling me that because Kehinde Wiley is gay, he needs glasses? Clearly this is what he is saying. Kehinde, I hate to tell you this, but that person in your painting is a guy.

Later on that day I spoke with Ignacio Pedronzo of Sammer Gallery, LLC in Miami. This was among my favorite booths (Moody and Hiram Butler were real stand outs as well), and Mr. Pedronzo was nice enough to talk to me at length about the artists, most of which were at one time either directly or indirectly aligned with Arte Nuevo, a Buenos Aires association of abstract and geometric artists, many of whom worked in a constructivist manner. 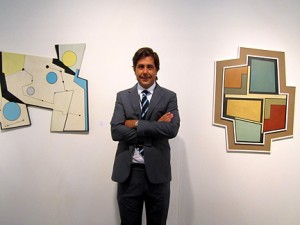 Also separated at birth, Ignacio Pendronzo and the work of Carmelo Arden Quin

Among the galleries cadre are Carmelo Arden Quin, co-founder of Arte Nuevo, Ana Sacerdote, recently rediscovered, and who in the late 1960’s turned her sights from painting to computer generated work, and Antonio Llorens of Grupo De Arte No Figurativo, which originated out of Uruguay.

It is a little known fact that anyone in this Uruguay art association caught making figurative work had to undergo the indignity of wearing nothing for the rest of his or her life save gaucho pants and an Affliction tee. 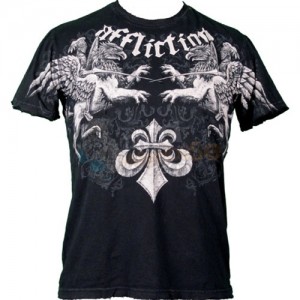 One of the oddest places I visited on Friday was LewAllen Galleries of New Mexico, where strangely enough, its booth was manned by a chair, which seemed to be selling other kinds of chairs to what I assume was a clientele consisting solely of tables. 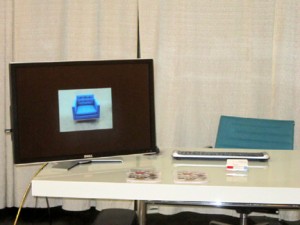 I was too intimidated to clear up what may have been a complete misunderstanding of the situation, having once been severely berated by an Eames Chaise Lounge, after accidentally referring to its Ottoman as a Suleiman Turk.

By this time I was tired after two days of traipsing up and down aisles of the fair, and decided to make one final stop at Schroeder Romero and Shredder, a gallery owed by a Ms. Schroeder, a Ms. Romero, and a machine used to destroy private documents.

(Little did I know it would not be the last place I visited that day.) 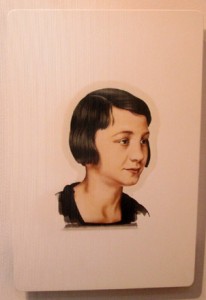 Here I found two lovely, haunting paintings by an artist named Lordan Bunch, both entitled Amiable Study in White, and both painted in oil on Ouija board. A lot of Lordan’s work is derived from photo booth images from the 1920’s – 1940’s, and such was the case with these two portraits.

After asking the regrettably named Director, Mr. Shortliffe  if he knew who the people were in the paintings, and receiving little by way of an answer, my curiosity was piqued. Who were these two people, were they still alive, did they die horrible deaths, what was their story? 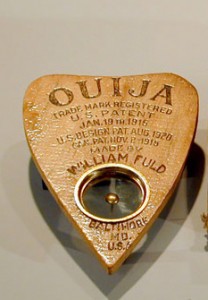 I decided to ask the Ouija.  Luckily I carry my own pianchette and immediately started moving it across the surface of Bunch’s painting.

Well that certainly was a terrible idea.

Did you know you could get arrested for defacing artwork? I had no idea.

After two days in lockup, I came back home and transcribed my conversation with the oracle.  It went something like this:

Who ever suspected that the dead would be so tedious? Jesus.  Kill me now. No, wait, don’t.

Well, all in all I had a positive experience at the Houston Art Fair.  Initially I had real reservations about going. I went in thinking the worst but in all honesty it wasn’t so bad.  I talked to a lot of interesting people, I saw a few truly notable pieces of art, I learned about art movements and methods of creating I had never considered before, and best of all, I had the opportunity to take part in two nights of good loving at the Harris County Jail. 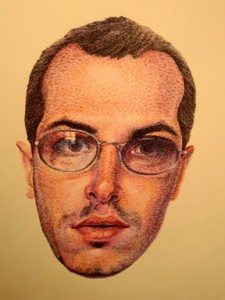 I will never forget you Deputy Chamandy!

Should Houston Have an Art Fair?

Your mention of Carmelo Arden Quin and Arte Nuevo brings to mind the Madi Museum in Dallas, long devoted to geometric art. They showed Carmelo Quin last time I was there. http://www.madimuseum.org.

The humorous side of looking through the looking glass.

Yes, yes, guiltily enjoyed the skewering, unlimited lattes for you in lieu of a saucer of milk. Looking forward to your articles on the next one, if you’re not in jail.

Great writing- hope you go to Miami for Art Basel and bring your skewers!
I’d love a roast of our fine band of blunderers at the AleatoricArt Gallery for the Red Dot Art Fair.

I wish! That would be fun.

For the record, its pronounced SHORT LIF. Far less regrettable that way. And Lordan’s photos come from anonymous vintage photographs from the turn of the century.

Thank you Mark. Of course you know I was kidding about your last name. And I really love Mr. Lourdan’s work. I looked it up on line on your website. Beautiful and haunting.