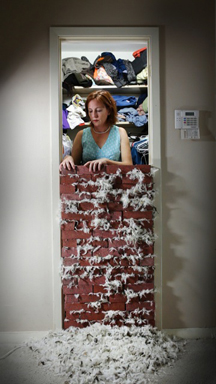 Last weekend I went with a friend to a string of local openings. Some of the shows I saw I don’t even remember looking at, although I distinctly remember every conversation I overheard or had on the night in question. The conversations were compelling and funny, and at times actually intelligent sounding, which is probably why I remember them and can’t recall thing one about the artwork hanging on the walls.

Now granted, if you have lived in and amongst an art community for any period of time, you know its sort of unrealistic to think that you’re going to be able to dedicate your full attention to the art on the night an exhibition opens, because every time you make the least little attempt to approach it, another friend or acquaintance intercepts your mission, with a fare thee well and a howdy do.  But you also know, that if the artist is worth his or her salt, you are not going to let some friend, yammering on about his penchant for head jars, hinder you from looking at the art.  And if it the work is strong enough to make you forgo conversation, you’ll go back to the gallery a second time on a day when a bunch of drunken artists aren’t treading your toes.

One show worth a second visit is estate Sale now on view at Art League Houston  (January 13 – February 24, 2012).. Now before you say, “Hey wait a minute don’t you…?” let me stop you mid-sentence, because I quit that place a couple weeks ago, well before the artists Stephen Hillerbrand and Mary Magsamen (husband wife duo Hillerbrand + Magsamen) started installing their show. 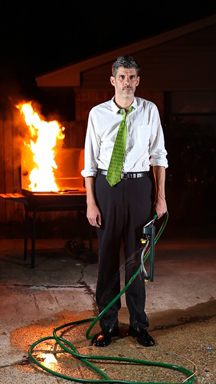 The exhibition opens with a video entitled “Accumulation”.  A father (Stephen) holds his young daughter (Madeline, real life daughter of the couple) by the wrist and dangles her by the arm from what looks to be a garage attic. She smiles as she twist and turns, occasionally reaching with her free hand toward her father for reassurance.  This clip alternates with the father and the mother (Mary) building a precarious pyramid from the seemingly necessary-at-the-time of purchase junk their family has amassed over the years — children’s swimming pools and push toys, rakes and lawnmowers, coolers and water noodles, bicycles and Christmas lights.  The final capstone of this later day mastaba is an insubstantial Styrofoam cooler, which father, mother, then child precede to climb upon at risk to life and limb, to gain access into the attic, very much like I imagined Khufu did as he ascended into the sun.

In a second video, whose monitor is bricked into a wall made up of more toys and the odd phone still in its box, the mother stands in front of a garage crammed full of the very same paraphernalia.  From its center extends a rope, which she securely ties around her waist.  She looks out on the viewing audience, and momentarily shifts from foot to foot, then WHOOSH, she is abruptly jerked through the wall by the father, who is standing on the other side.

The heart of the exhibition takes place in the main gallery, which is painted pitch black.  Four life size front/rear video projection screens face one another, with each depicting a different action by the mother, father, son (little Emmett, again the actual son of the couple) and daughter.  On the floor in the middle of the screens is one of those goofy frog lidded sandboxes; from it emits an eerie light, Surrounding the four projection screens are numerous ragtaggle structures built from yet more of those toys and yard tools, as well as old television sets and monitors. 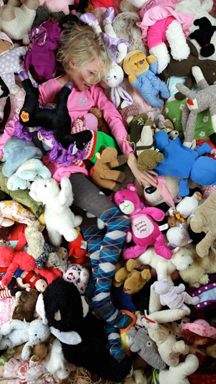 In one of these high definition, hyper real looking videos the mother, dressed in a lovely turquoise cocktail dress, runs into the closet and proceeds to brick herself in, ala Casque of Amontillado, only this time with a mortar of feathers.  Anybody that has ever been a  parent knows the feeling. You don’ really want to permanently run away from your family, but if you don’t get a break every now and then, you are going to lose it and maybe start doing some real harm.  When I first got divorced, my daughter and I moved into a shitty little garage apartment.  This place was lousy with termites, which may explain why there was nary an interior door in the entire place, save for the sliding glass ones in the shower, an enclosed area that I now refer to as “mother’s little refuge”.  (Only I didn’t call it that at the time, because it sounds too Joan Crawford/Valley of the Dolls like creepy.)

In a second video, the daughter luxuriates in a heap of toys, rolling this way and that until finally she is sucked into the colorful pile.  In the third scenario, the father, uncomfortably clad in slacks, a white shirt, and extremely green tie, abjectly holds a water sprinkler, which rather rudely waters not the yard, but his pants.  Behind him is a barbecue pit that periodically flares up when someone stage right, and I am assuming this is a male neighbor, forcefully pisses into it to claim his domain.

The final video is of the little son. The child wears goggles, t-shirt, underwear, and pair of rubber boots. Next to him is a stack of china plates, about half his height, which he proceeds to smash, one after another.  His demeanor changes throughout the process — at times he seems completely into it, punctuating each smashed plate with a karate chop or a mighty nod of his head.  Other times it’s as though his obligation to destroy has become too heavy of a burden, and he looks a little sad.  I variously loved and fretted over this video the most – – I imagined how amazing it would be for a kid to be given permission to destroy a whole set of china, but at the same time I worried that the shards of china were going to cut his legs or fly into his underwear. (I also worried Madeline’s arm was going to get pulled out of its socket when Stephen was dangling her in the air.) 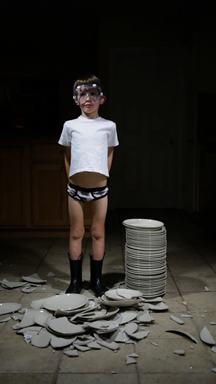 This show really struck a chord with me, especially in that it dealt so much with two issues that are looming in my life right now – the dynamics of family, and the peculiar American habit of owning more stuff than anyone could possibly ever use or need in a multitude of lifetimes.  My father died recently; my mother has Alzheimer’s and no longer lives in their home.  For the past six months my sisters and I have been over at the house culling through the untold number of possessions my parents acquired during sixty-three years of married life.

Some things we are throwing away; others we are selling at garage sales, or auctioning off.   The most important things, those with sentimental value, we are divvying up between the three of us. This has been hard, trying to be civilized, deciding who gets what, what is or isn’t sentimental, what items are or aren’t important enough to keep.  When we start to bicker, I sanctimoniously try to remind everybody that this is just stuff we are fighting over, and whether or not we get to be the one that keeps the felt holly bow tie that was our dad wore at Christmas or the tomato shaped pin cushion that mom used when sewing our clothes is  just not that important in the overall scheme of things.  But whom am I kidding?  Our mother and father, our memories of our childhood, our sense of who we are as fully grown adults resides within these objects, and each time I am allowed to claim something as my own, I pounce upon it like its a million dollars in gold.