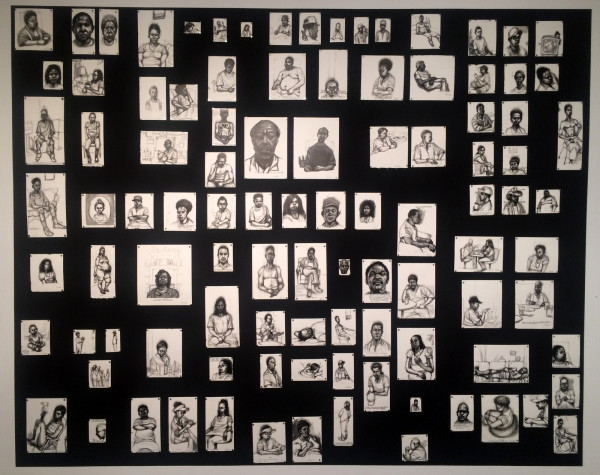 Sedrick Huckaby’s Everyday Grace at Art League Houston brings together work from two major series: The 99% and Big Momma’s House. The 99% is a more than a hundred lithographic portraits of people in Huckaby’s neighborhood in Fort Worth. Done in a sketchy style of Giacometti-esque cross-hatched marks that build in density, the suite shows everyday people with incredible specificity and depth. Like the mark-making in the prints, Huckaby layers bold strokes of paint to create sculptural reliefs of family members and their environment, such as his grandmother and her home. The physical quality of the paint feels like not just an attempt to represent a family member, but to physically invoke their presence. In another painting, Huckaby enlarges a detail of a quilt to a large scale, transforming the abstract detail into something monumental. 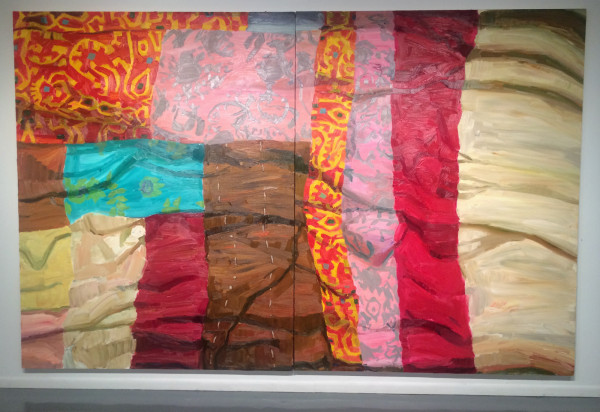 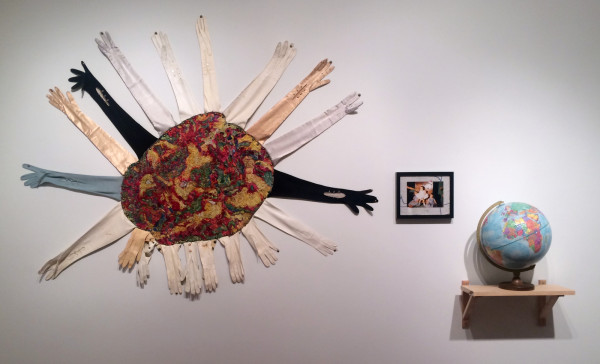 Beth Secor, You were, now are, the world of me, consists of embroidery of Alzheimer’s MRI embellished with vintage kid and silk gloves (2013), photograph of Beth Secor standing, assisted by Shirley Secor, surrounded by Susan and Shirley Secor, mounted on found embroidered linen (1957), 12″ Repogle globe (1976-1991)

Beth Secor’s The Significance of “Material” at Lawndale Art Center provides a beautiful addendum to Huckaby’s. Here, Secor uses actual material objects and artifacts that connote her mother’s presence, who is in declining health from Alzheimer’s. These are poignant combinations of sculptural assemblages and portraits (both embroidered and drawn) displayed alongside her mother’s photographs and possessions. Secor’s artist statement is also direct, vivid, and moving. She tells a story of the things her mother made and how she attempted to teach her how to sew. It explains where the work comes from and its impetus: “She [Secor’s mother] is like the Cheshire cat, slowly, slowly vanishing before our eyes, and as she goes I try to grab bits and pieces of her in order to preserve the mother I knew.” 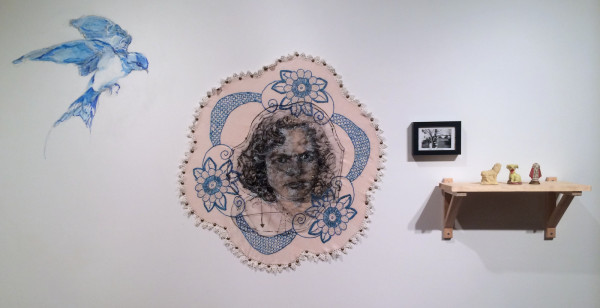 Beth Secor, This is terrible (this is sublime), drawing of Shirley Secor in ink and Wite-Out on vellum with embroidery, on found embroidery with beads (2013), photograph of Shirley Secor (nee Marrs) and Clara Marrs (1946), sulfur lion statue with broken head from Gulf Sulfur Company (1962); antique dog statue from Japan with hole in head (date unknown); saint statue from Mexico with head knocked off (2004)