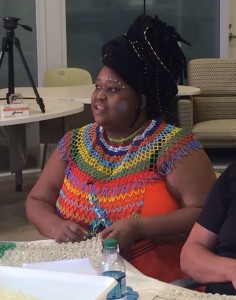 Bulelwa Bam is one of 16 traditional beaders from the Eastern Cape province of South Africa here in Houston for a few months as part of ALH’s cultural exchange program. She is staying with an ALH patron in River Oaks and, baffled by Houston’s extreme dependence on cars, has been taking the city bus from a stop near her host’s home to ALH and to the building on the Rice University campus where beaders and volunteers are weaving the 350,000 acrylic beads. The other day, a River Oaks Police private patrol car, equally baffled by a black woman casually walking in the neighborhood, stopped her.

As reported by Free Press Houston (FPH), the conversation went something like this:

When Bam told the officer that she was not an employee of the neighborhood but a guest, he did not comprehend and again asked where she worked. When she could not remember her host’s last name, he detained her and called for backup. While he sat in his air-conditioned car making calls (and while several light-skinned folks jogged or sauntered by, Bam told FPH), she phoned Jarmon, who then spoke with the officer. The officer ultimately spoke with the host and allowed Bam to proceed to the bus stop.

(Photo via Bulelwa Bam’s Facebook page. This story was also reported by Houston’s Channel 2, which includes interviews with Bam and Jarmon.)

Jesus. Nice work HPD. Are you trying to provide a refresher course on apartheid for a visiting artist? While resident Houstonians are familiar with the “Walking While Black” syndrome, how thoughtful of you to extend this treatment to a visitor. Because we all really need YET ANOTHER object lesson in entrenched racism…

Correcting my comment – apparently it was a rent-a-cop and not HPD. Which, I doubt makes Ms. Bam feel any better.

Thank you for helping to spread this story and for linking to our site. However, despite Molly Glentzer’s omission, I would like to make clear that it was FPH that broke that story, not passive chatter on Facebook.

Sorry, to clarify, when I say “that story,” I mean the Inversion story. FPH broke both these stories. Thanks!

Thanks for the clarification. You guys rock!

This event reads like something straight from the pages of Greg Grandin’s “The Empire of Necessity.” Houstonians, we can be so proud we are still in the early 19th Century. Yes, Francois-Auguste Baird’s “Slaves on the West Coast of Africa” comes to mind; to wit, the mind sets remain the same.