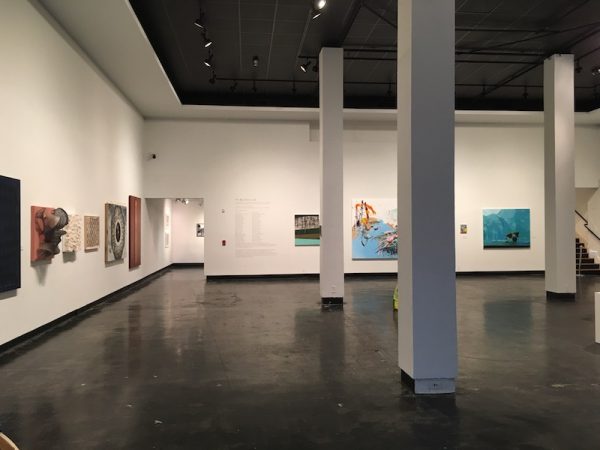 Ed note: This is the third consecutive year that Houston-based artist and Glasstire contributor Betsy Huete has chosen her favorite Big Show works for Glasstire.

When I initially discovered that curator Evelyn Hankins was only including 44 artists in this year’s Big Show at Lawndale Art Center in Houston, I was excited. I hoped the smaller number would offer a nice contrast to Toby Kamps’ explosion of a Big Show last year, and would potentially continue the heartening trajectory of a conceptually and curatorially rigorous and thoughtfully organized Big Show we’ve seen over the last three years or so. Lawndale has been bringing in curators that have really gotten away from the hodge-podge, flea-market selection that was the Big Show of yore: Yes, it was charming in its own right, historically, but it also lacked the diversity and sophistication of the full Houston art community.

My problem with Hankins’ curation, though, is that with such a relatively small selection of works comes the expectation that the show would be exceptionally tight — and it isn’t. There is some thematic organization, but overall the show feels anemic and meandering, and worst of all, the Lawndale’s O’Quinn Gallery, featuring sculpture, reads as meager. Perhaps Hankins would have been better off putting false walls in O’Quinn and and moving the work from the Canvar space in there, to add some curatorial dynamism. I normally allow the following caveat for these visiting curators: Well (shrug), maybe she or he didn’t have much work to choose from in the first place! But, in knowing the breadth of Houston’s art community and the general pool of artists who tend to apply to the Big Show year after year, I wonder if this is a viable excuse anymore for a resultant thin show.

Anyway! Here are my top ten: 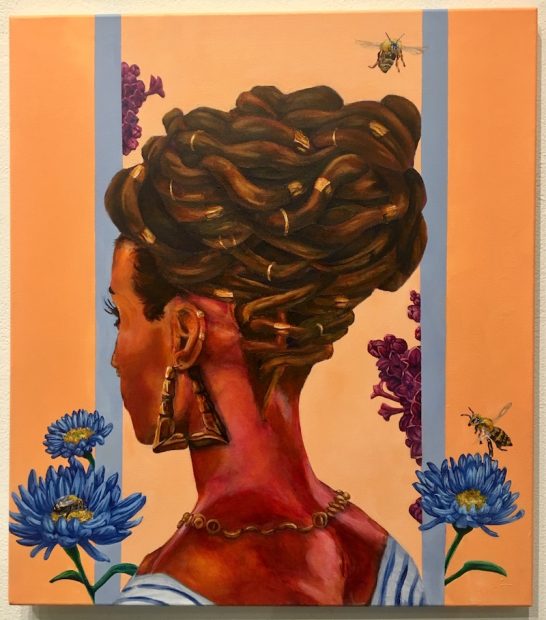 There are certainly elements of Kehinde Wiley in Pace’s Medusa, but what would normally constitute a more baroque background in Wiley’s work is subdued here. That’s a smart move by Pace, because it maintains vibrancy while allowing us to spend more time intimately poring over the focal point of the subject, which is (oddly enough) not the sitter’s hair. We can’t see this woman’s eyes, but the geometric triangular softness of her cheekbone, in conjunction with the sharp punctures of her eyelashes, gives us a clue that she is looking intensely — skeptically? — at something we’re not privy to. 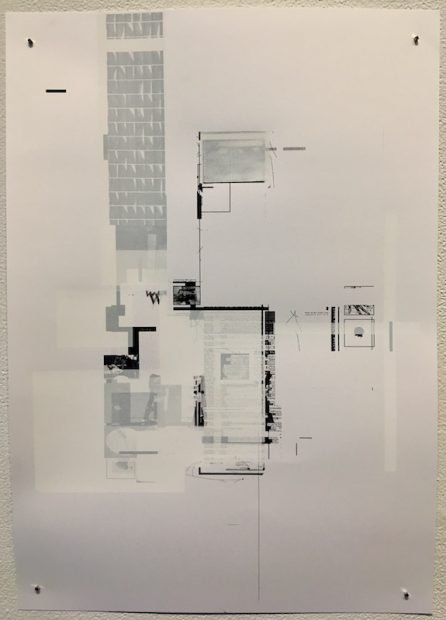 A normally mundane word such as “registration” feels suspect in our current political climate. Unikel plays off this sense of anxiety, using language and erasure in a way that is not only a device to display and conceal rhetoric, but also structurally —  to convey a kind of computer motherboard, or architectural layout, or some kind of overarching plan to either overtake (or escape) something else. 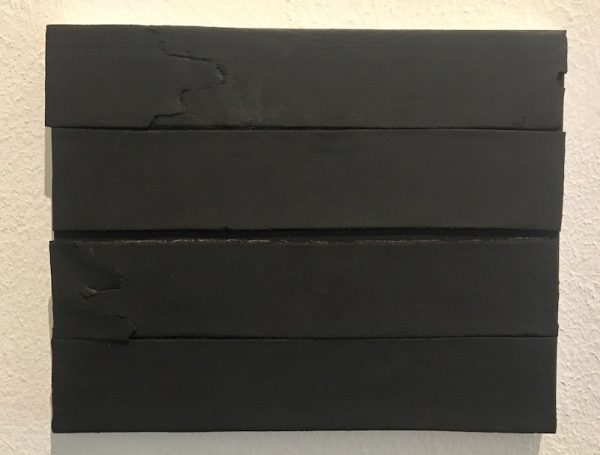 It’s reassuring to see such a sculpturally simplistic work imbued with rife political tones and a genuine sense of mourning. With Flag, Harding makes a compelling case that non-representational abstraction can directly relate to what’s going on in the world.

The two abstractions on either side of the woman we can assume is ‘Lee’ are unnecessary, because the arrangement betrays confidence in the real piece, which is this portrait. Her gaze is searing, knowing — simultaneously confrontational and peaceful—and commands our attention. She gracefully embodies a depth that comes with womanhood. 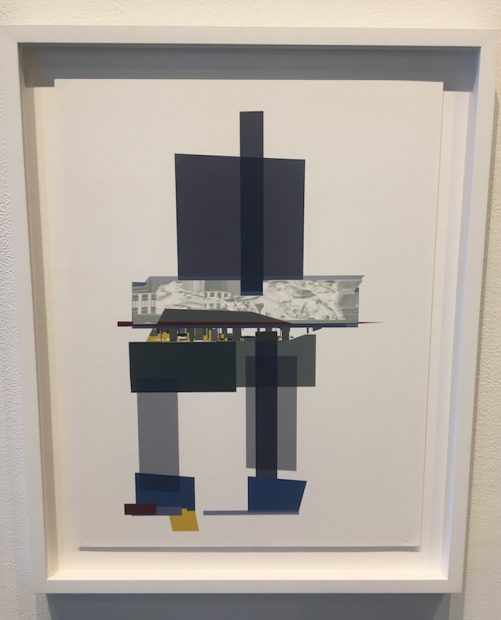 For being so structured, so geometric, Distorted Reality quite playfully and representationally reflects Houston. It resides somewhere between signage and a teetering parking garage, and echos the concreteness (and the lack of concrete architectural identity) of our city. Its midsection is detailed and thoroughly anchored; the bottom half veers into geometric wobbliness, reflecting the ever-changing sprawl and schizophrenic possibilities and excitement of the city’s no-zoning laws. 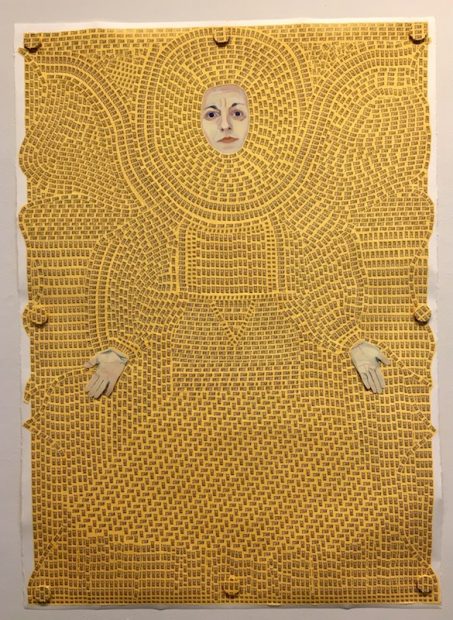 STAIN cleverly vacillates between religious or royal iconography and folk art. Though intended as a self-portrait, with the figure’s hands outstretched, this piece has a universal feel to it. The figure has a baleful look in her eyes as she’s swallowed up by a word that not only reads as an accusation against herself, but as the burden many women in these times feel when a demand for autonomy over one’s body is equated with evil. 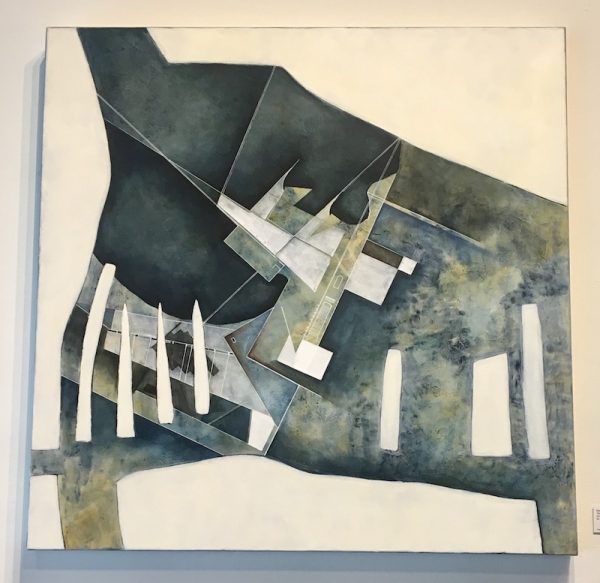 We don’t know what void Villanueva is referring to in the title of her piece, but the pooling blues and muddy brownish-greens read as rising waters from an aerial view. Slithers of white, organically shaped rectangles and geometric squares float like eerily peaceful islands. We don’t know if this is how the water recedes, or if it’s about to swallow them whole. 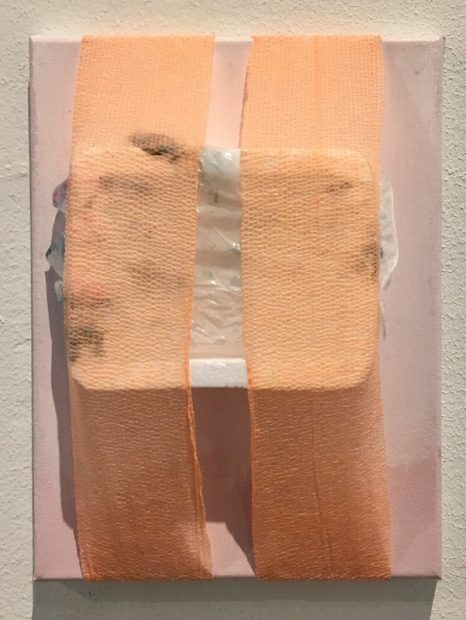 It’s common practice for contemporary painters to make sculptural decisions with paint. But what’s interesting about Where Are Your Hands is that while it’s using the vocabulary of painting (mounting on a canvas), it’s using sculpture to make painterly decisions, in a kind of inverted logic. The two stripes of bandages read as muted, but also pop against the light pink background. The translucency of the bandages also highlights the delicate nature of the styrofoam and the veiled nature of the rubber glove, which  provides a delightful contrast of glazed grotesquerie in the center. 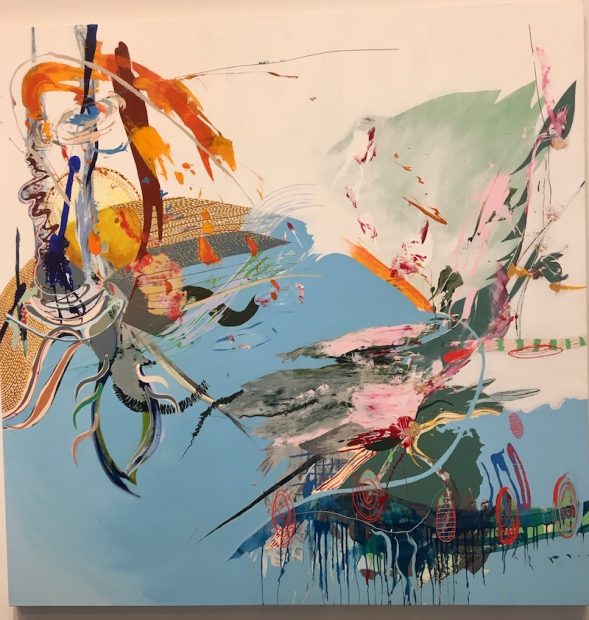 While nearly wholly abstract, Musica Ficta is quite narrative. Sure, it’s formally dynamic, as the viewer’s eye gravitates to the oranges in the top left corner and then drops down to the bottom of the canvas, then back up to the right in a kind of whirlpool effect. But the work also reads as a lyrical, even playful apocalyptic battle between two warring, colorful monsters in the midst of a midday oceanic backdrop. 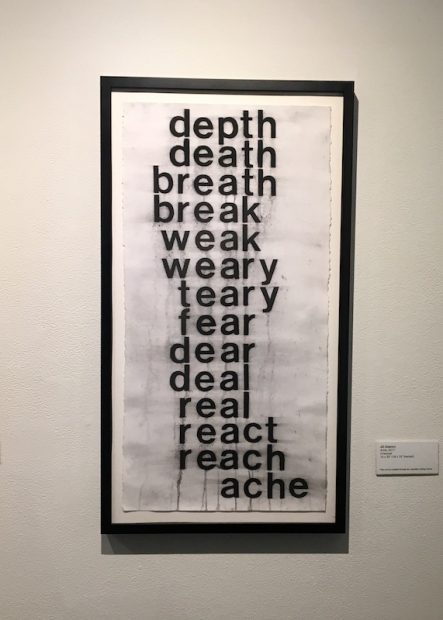 While Ache registers as a text-based work, it’s really more of a performance piece. That’s because we’re less focused on the blocky typography (while it does, interestingly, become increasingly muddled as our eyes descend the work) and more focused on the syllabic gymnastics we perform in our heads as we mouth these words — and more specifically how those actions dictate our own story. Starting from the relatively mundane safety of the eh sound in “depth,” or even “death,” we take a sharp turn into the syllabic violence of the ee sound in words like “weak” and “fear,” and finally careen off the cliff into the hard ck consonant of “ache.”