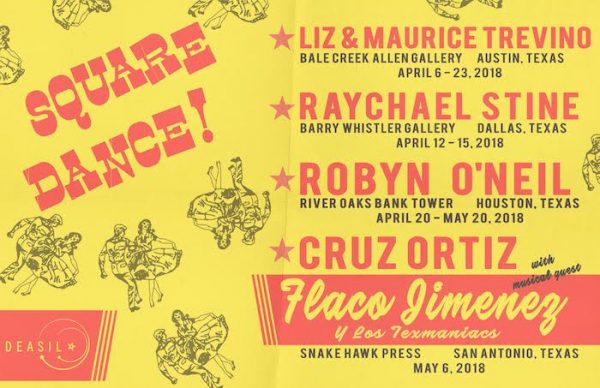 This past November Houston gallery Art Palace announced the closing of its physical space as it began to transition to a new business model. Today, Art Palace’s Arturo Palacios and Hilary Hunt have unveiled the new name and initial programming of their new venture.

It’s called Deasil (which means, briefly, “following the course of the sun” in Gaelic) and its ambitious, multi-city programming begins right away. Four shows opening over the course of four weeks in four Texas cities is called Square Dance. More on that below.

“DEASIL is a new venture that is innovating the itinerant possibilities between commercial gallerists, art consultants, and independent curators. It offers a nomadic approach to programming that aims to produce exhibitions through the careful consideration of artistic intent, time, and unique location. DEASIL prioritizes collaboration, resourcefulness, and flexibility. We have a responsibility to the art world to be good communicators of what artists are doing, and to provide artists with space and opportunity to build healthy careers.”

Square Dance, Deasil’s first major programming, will take place in Austin, Dallas, Houston and San Antonio starting April 6, kicking off with a show at Bale Creek Allen Gallery in Austin with a show of works by Liz and Maurice Trevino. Next up, opening in Dallas on April 12 (the week of the Dallas Art Fair) is a show of Raychael Stine’s works at Barry Whistler Gallery. Then on April 20, Deasil opens a show of works by Robyn O’Neil at River Oaks Bank Tower in Houston. And on May 6, in San Antonio, a show of works by Cruz Ortiz opens, with a performance by Flaco Jimenez, at Snake Hawk Press.

For more on all of this, including more on the development of Deasil and news of its recent adventures, please go here.