by Joshua Fischer May 13, 2015
FacebookTwitterEmail 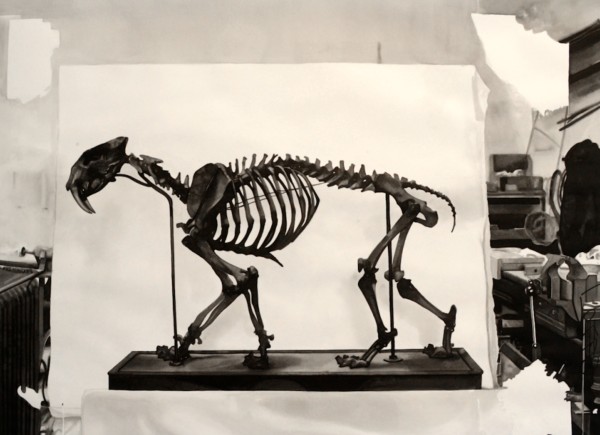 I can imagine artist Eric Zimmerman in his studio meticulously rendering his graphite or ink drawings, like an archaeologist carefully dusting or chiseling a submerged artifact in order to unearth it. Zimmerman often reaches into the past, taking an object or photograph of some personal resonance that is not of this time—for instance, an image of a jagged early human’s tool from the Paleolithic era; a meteorite specimen found in 1964; an archival photo of a saber-toothed tiger skeleton; or even a cracked cassette case of a Sonic Youth album. He photographically flattens these found objects and images, converts them to black and white, and then laboriously copies each image, often enlarging and magnifying it. What could seem like a cold, mechanical act of appropriation instead reveals hidden meanings and new associations as Zimmerman translates and changes the image from one medium to another. This takes a lot of time to do, and for recent drawings he has begun using black sumi ink to speed up the process, but labor itself is not his point; it’s more the consequence of his wish to slow down our propensity to speedily swipe, click, and discard most images we encounter daily. 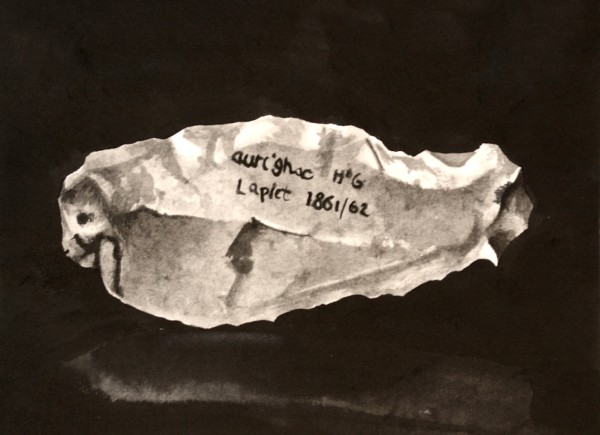 In Zimmerman’s Elegy for Left Hand Alone exhibition at Art Palace Gallery, his black and white drawings are displayed with sculptures to form a cohesive installation organized around an angled wall that bisects the gallery to form two triangular spaces. The wall is effective, as it slows our ability to take in the whole show at once, and lends a sense of mystery about what lurks around the corner. Amplifying the mystery is a sound piece that fills the gallery with otherworldly squeals, chirps, squeaks, and echoes. Easily mistaken for what could be sounds from the abyss of outer space, the abstract sounds are German scientists’ field recordings of seals, whales, and shifting ice beneath the Ekström Ice Shelf in the Antarctic Ocean. 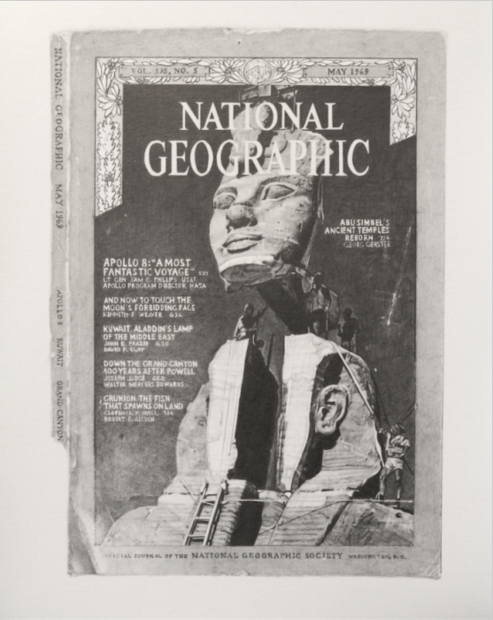 This mix of elements could at first feel like a puzzle with answers that only Zimmerman holds the keys to, but the reduction of the images to black and white strips them of obvious indicators of time and place, grants the show a unifying aesthetic register, and allows for open-ended associations. The formal approach in each work is similarly constrained, as each subject is isolated as a thing unto itself, without added collage or montage. In one particularly striking work, a flattened National Geographic cover from May 1969 shows an image of ancient Egyptian temple alongside headlines referring to the Apollo 8 mission and a story about the Grand Canyon. The cover appears pressed against the bed of a scanner like a specimen with a disappearing spine and tattered pages; Zimmerman pays close attention to drawing every crease and moment of wear. The drawing hints at bigger meanings, as the print-magazine format itself may be disappearing in the digital age, along with the fading of grand ambitions to explore the far edges of space, nature, and the globe. 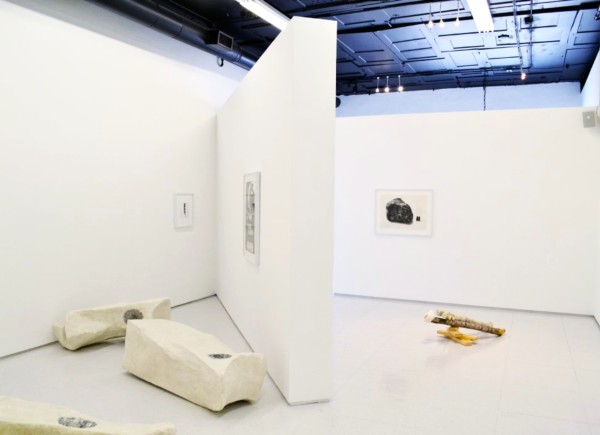 Resting on the floor of the gallery are papier-mâché sculptures Zimmerman modeled after the basalt boulders Joseph Beuys made for his circa-1983 work, The End of the Twentieth Century. Like his works on paper, Zimmerman converts his source into black and white, giving the objects a kind of neutrality as they take on the heavy subject of environmental apocalypse, but with a light touch. These papier-mâché renditions could be lifted easily, unlike Beuys’ weighty boulders. Zimmerman’s sculpture fits well with the sound recordings from Antarctica, as they look glacial, and in combination with his drawing of the National Geographic cover of ancient Egyptian ruins, it brings to mind the passing of civilizations and a sense of geological time measured by millennia. 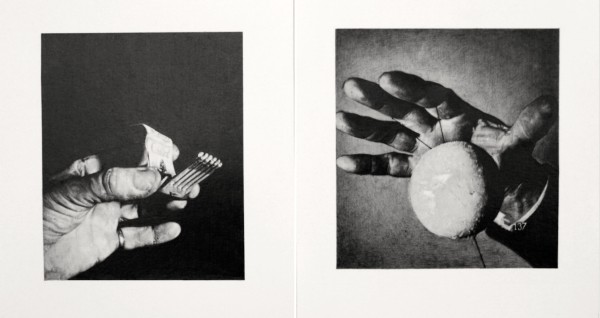 The exhibition’s title, Elegy for Left Hand Alone is taken from Don DeLillo’s 1997 novel Underworld, and the human hand appears in many of these works. Among them: a sculpture incorporates a plaster cast of the artist’s left hand; an image from the Voyager spacecraft’s golden record shows a woman holding her hands in front of an x-ray that reveals the bones beneath her skin; and two wonderfully mysterious images pulled from a book illustrating magic tricks show a hand with a matchbook and another holding a ball tethered to a string. It makes sense that Zimmerman, an artist seemingly obsessed with transferring images by hand, is so interested in hands. The motif also metaphorically conjures associations with an artist or magician’s illusory ‘sleight of hand,’ the ‘hands’ of fate or history, and even perhaps economist Adam Smith’s idea of the ‘invisible hand’ as a way to justify free-market capitalism. Zimmerman’s imagery throughout the exhibition grapples with these kind of larger forces that shape history from the pre-historical to the modern to the futuristic and cosmic. 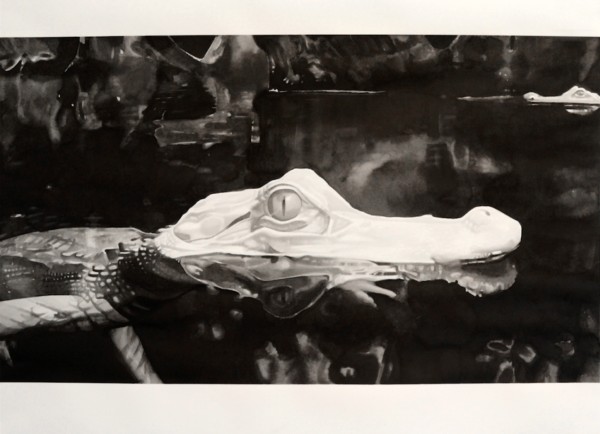 In the drawing Suprvision, an enlarged magnifying glass sits against a grey ground and is a visual analogy for Zimmerman’s artistic approach. Much of his success as an artist rests not only in his technical virtuosity, which is striking, but also his decisions as to which images to zoom in on and magnify with such intense concentration. In an age where we cycle through images endlessly and may “curate” collections daily, Zimmerman’s communication of so much through such an open-ended yet laboriously crafted visual essay is especially bold. Zimmerman’s choices reverberate with and contemplate the relentless course of history and the things left behind. Digital images hold power through their collective ubiquity, but then lack individuality, staying power, or relevance. Zimmerman’s Elegy for Left Hand Alone reinvests them with layers of significance.

Through May 23 at Art Palace, Houston. All images courtesy of Art Palace.