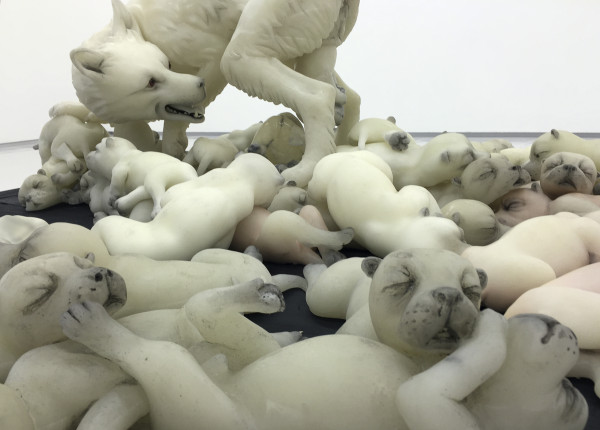 Peat Duggins takes a long view on history, nature, and man’s role in both in his compelling new exhibition The Great White Whale at Art Palace. I wrote about Duggins’ work five years ago and as he did then, he remains intently focused on both investigating and making fun of man’s inability to fit comfortably into the world into which he was thrown. Duggins has strengthened and refined his style in the past few years giving us a mature, generously dense room of sculpture to inhabit. 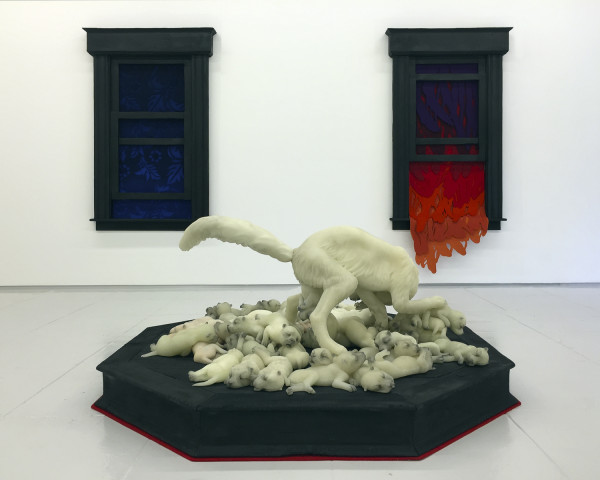 Like all of Duggins’ sculpture and drawing, this new body of work, which takes its title from Hermann Melville’s bleak ode to the all-consuming nature of American ambition in Moby-Dick, displays an impeccable but unfussy virtuosity. Blocky interior window frames are built with heavy wood, charred to a seductive matte black while a contorted mother coyote giving birth to an unnaturally large litter of pups is cast in urethane the color of nasal mucous. The work in the show is essentially black and white punctuated with sharp passages of industrial felt dyed in rich blues, reds and oranges. 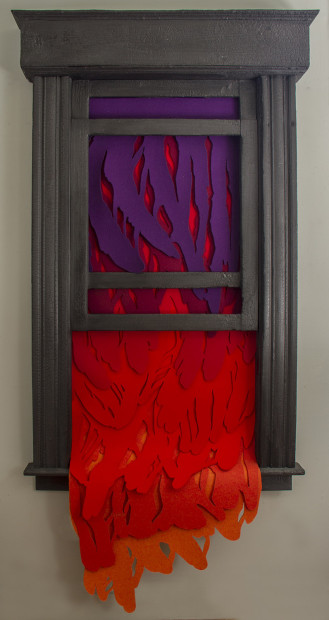 How should we approach an exhibition that cleverly seduces us with beauty, authoritative artistic craft and endless opportunity for personal interpretation while it withholds clear meaning? I’ll take the exhibition statement at its word when it tells us that the meaning of The Great White Whale is malleable, and I’ll tell you the story the work told me. With good art, we must keep in mind that it is inexhaustible and the stories told about it always partial, allowing room for each of us to set up a point of view through our own experiences.

White Buffalo, Untitled (Horn Mount), and Coyote and Pups are all mounted on octagonal plaques and pedestals made of the same charred wood of the mysterious window frames. Over the years, Duggins has consistently used and subverted various Christian metaphors and historical figures like Saint Boniface, setting them against a brutally unidealized natural world. For Biblical students, the number eight represents rebirth or regeneration. When Noah’s Ark crash-landed on Mount Ararat, eight people emerged to begin a new civilization and many baptismal founts are built in octagonal formations representing the symbolic rebirth of baptism. 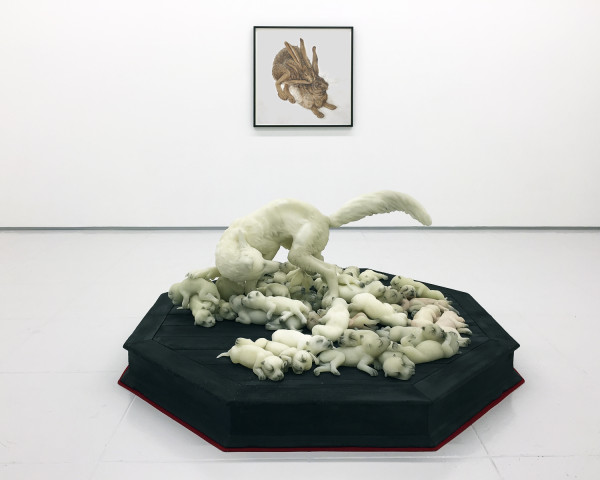 In the case of Coyote and Pups, the regeneration is completely absurd and it seems clear that the mother won’t be able to sustain her oversized brood. These babies are born to die. A few weeks ago I read that China lifted its infamous one child per household ban. In a country of nearly one and a half billion people and a thunderous economy, what are the implications of this policy? The United States is the richest nation in the world and at 6.2% has an infant mortality rate higher than many fully developed nations. How do we to make sense of this?  Duggins doesn’t propose any answers but he smartly casts the pups nearest to, and still dropping from, the gaping womb in a shinier resin, subverting my tendency toward fretful existential angst with a satisfyingly humorous visual gross-out joke. 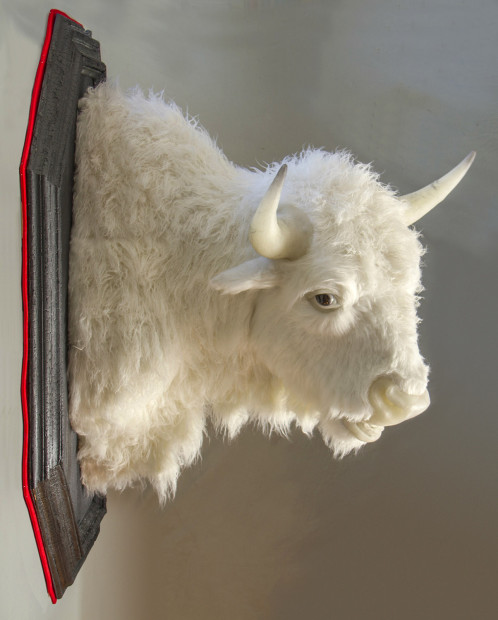 With the White Buffalo, which stands in for Captain Ahab’s white whale, Duggins plays with the morbidly ridiculous human practice of mounting severed animal heads outfitted with glass eyes on wood boards in order to make them take on the appearance of life. Fabricated with the same pale resin, fake fur, and glass eyes, Duggins’ buffalo looks more alive, and mournfully bemused than any taxidermy head I’ve ever seen. And mounted to a shape that has symbolic meaning associated with birth, I imagine the buffalo—and the artist—shaking his head as he looks out over unsustainable birth rates, along with an animal porn watercolor of decidedly angry rabbit venting its all-too human frustration on its mate. 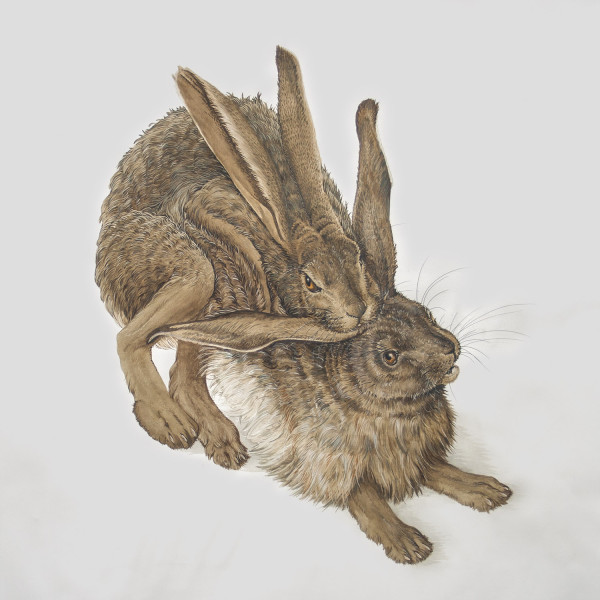 Which brings us to those windows. It took me some time before I understood that the window frames shift the reality of the exhibition in an important way. Viewed from a certain perspective, the windows transform Art Palace’s starkly lit interior into a contained metaphorical space. We are inside the world of Duggins’ mind and when we turn to the charred windows to look outside for a breath of air we’re confronted with a decorative blue screen and layers of cartoon drips slowly seeping in. 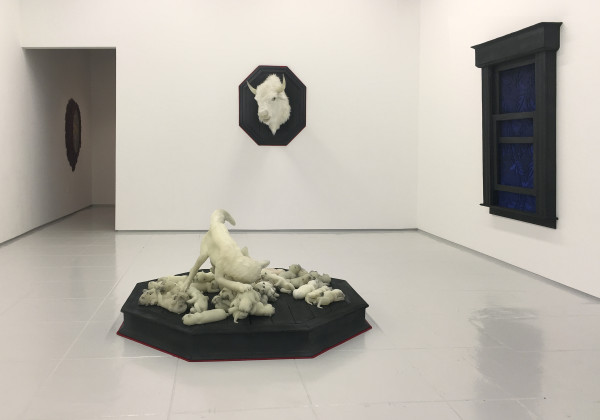 Looking at the thick, bright orange and purple felt meant to represent—at least in my mind—a slowly advancing lava flow put me immediately in mind of the ancient Roman city of Pompeii frozen by fire in 79 C.E. The implications of the charred wood suddenly snapped into focus with this realization and like the Buffalo and the soon-to-be starving pups, I felt trapped inside my own ridiculous and beautifully sex-obsessed civilization. Duggins’ artistic act is to face a reality in which we remain at the mercy of a natural world that can bury cities and wipe out populations. He delivers it with a half smile and a sure hand.

Peat Duggins’ ‘The Great White Whale’ is on at Art Palace, Houston, through Dec. 19.

Hi…great article.
But please stop using man as a word to describe humans.
I’m not trying to reduce the essence of the article down to one complaint and I am not trying to oversimplify any point you’re making, it’s just that it is disconcerting that people still use “man” to mean the whole human race.

I even admit in the world of problems there’s bigger fish to fry than this, but it’s just annoying.

thanks
a guy in San Antonio

Thanks for your request, Xanatrippe (c’mon guys, at least use a fake human name. I hear all your comments in the voice of the HAL 9000).

I’ve thought about it. I’ve made peace with the complicated etymology of the word man. I like it’s broad, Romantic sweep and I like that it means a lot of different things and doesn’t take up much space .

On a psychoanalytic level I probably use it spitefully because my wife, my mom, my sisters, my editor, my teaching department head and my dealer all control my life.

Unfortunately I have to deny your request for now. But stay tuned, I’m always trying to evolve.