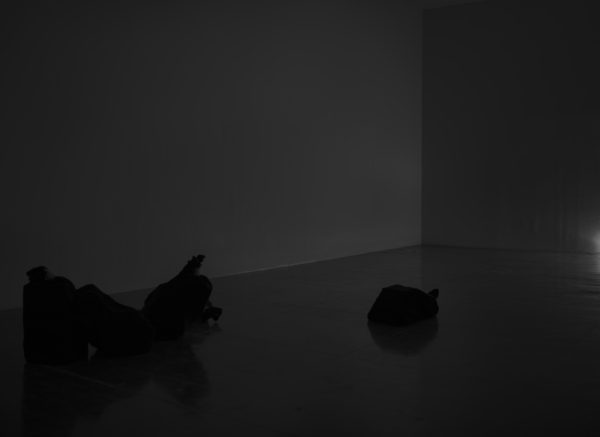 Note: This is part two in a two-part series.

Rolando López’s hidden story of invisible histories, Dark After Art, opened in July as one of the Artpace Summer 2017 International Artist-In-Residence Program exhibitions.

It continues through September 3, but don’t read this until after you’ve experienced it for yourself.

Choose a moment when you can enter the darkened space alone.

Part the velvet curtain that billows out of the door-sized opening.

Once you are in, don’t seek art or interpretation. Just respond to the space and the information your senses provide.

It is clear that your bodily and sensory exposure is going to be something other than the way the artist frames the experience, unless you’ve read the handouts provided. From these you can learn some of the artist’s past history, including the place of his birth, Aguascalientes, Mexico, where Solomon R. Guggenheim built a foundry, the Gran Fundición Central Mexicana, in 1894. Abandoned 30 years later, its legacy of exploitation and toxic waste is still present and physically manifested in the form of the nine-acre Cerro de la Grass, “the hill of grease.”

In 1939, with funds that included money extracted from Aguascalientes, Guggenheim opened the Museum of Non-Objective Painting, known since his death in 1952 as The Solomon R. Guggenheim Museum.

But… practice some kind of forgetting and enter Dark After Art alone. Once inside, move steadily.

Don’t wait for your eyes to adjust; silently trust.

This piece transports if you trust its terms: darkness and the suggestion of something hidden.

Move steadily toward the light.

A light flickers from behind yet another curtain, but eventually you’ll realize that this curtain is strangely still, as if gravity were collaborating with the force of an imposed history.

But wait: it’s not a curtain; it’s a concrete pillar, part of the building. Nevertheless, curtain or column, concrete support or something more imposing, light is behind it, beckoning.

As you draw near, you may place a hand on that column, feeling it’s coolness — the suggestion of detachment, and what’s more, it feels reliable, like hope.

You see that the light source is a candle, simply placed on the floor. But why does the light it gives reveal a fly on the wall?

Eventually your eyes adjust enough to notice five large black bags randomly grouped on the floor off the center off the space. Your path to the light didn’t intersect them, but now you can approach them, and by leaning down or kneeling discover by feel that they are full of books.

You may be tempted to sit with all this in the dark for awhile. Like the fly, you may listen. The books, a collection of Mesoamerican histories, are mute, but not forever. They are bundled for travel to the Guggenheim Museum Aguascalientes, a virtual project made real by this exhibition and others that the artist has offered since 2013. In the dark you may just be able to see it up there on its proposed location, the hill of grease.

The light eclipsed by the column, the fly made of toxic waste, fly wings, clay, and the artist’s own blood, the books trussed in bags — it all speaks to the exploitation of resources and human beings in the 30-year history of the foundry, which never delivered on its promise of economic growth for Aguascalientes.

Art After Dark may not yield the details of its meaning without the aid of the documentation on hand, but there is plenty to learn in the dark. The piece exposes a bodily feeling of uncertainty and offers the opportunity to counter that with engagement via wonder, fueled by inquiry, buoyed by whatever degree of trust you can muster. It’s an experience that brings forth a range of emotions and sensations that perfectly set up the deepening and broadening that comes with learning the background material that exposes the nature of exploitation and relocation of resources.

This is activist art of the best sort. The overall effect is one of incantation, vigil and ritual. Seductively inclusive, a bond of gratitude is formed between the artist and those he touches that leads to a deeper engagement with his story and the invisible histories he reveals.