[Disclosure: I’m in this show.]

For this year’s Big Show, Lawndale in Houston broke with tradition by having local curator Toby Kamps organize it instead shipping in a curator from elsewhere. For all the conceivable pitfalls and controversy that comes along with using Kamps, the payoff is huge: organizing works in vine-like clusters, Kamps transformed what is usually a roving mess of a show into tight groups of like-minded works that pinged off each other in silent conversation. The works ebb and flow along the large walls of the O’Quinn Gallery; Kamps demonstrated comfort and familiarity with the architecture. He clearly recruited veterans and heavy-weights into the show, which gave us a more diversified and respectful view of Houston’s art scene as it actually is, versus the folksy, small-town eccentric stereotype that outside curators tend to reduce it to.

With that out there, the show is too good. It looks like it was more primed for the CAMH than your average Big Show. It’s an obnoxious thing to admit, but to a certain extent it’s also true: I felt a pang of longing for the delicious, amateur-hour bonanza that makes up a typical Big Show. But really, I’ll take this embarrassment of riches over a diamond in the rough.

Without further ado, here are my top ten picks for 2017: 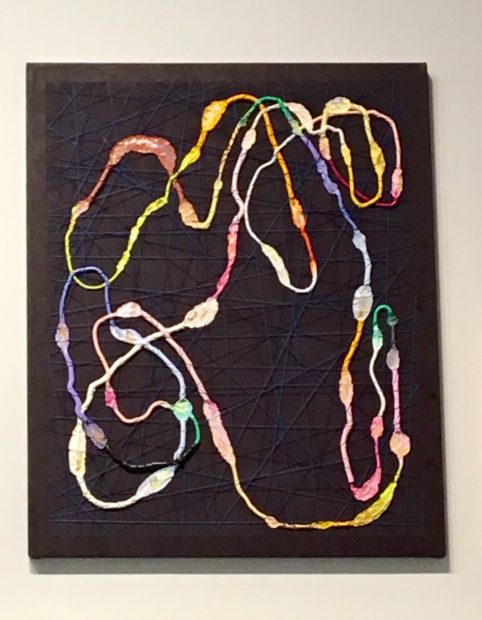 This painting looks like a maze made out of chewed gum and slug trails. Although this loopy, squishy, splotchy trail evokes a youthful playfulness, the real dynamism occurs in the geometric undercurrent of criss-crossing black string atop a black canvas — a subtle yet aggressive gesture. But things get really sculpturally gratifying as those strings slice through thick globs of paint like knives and lasers. 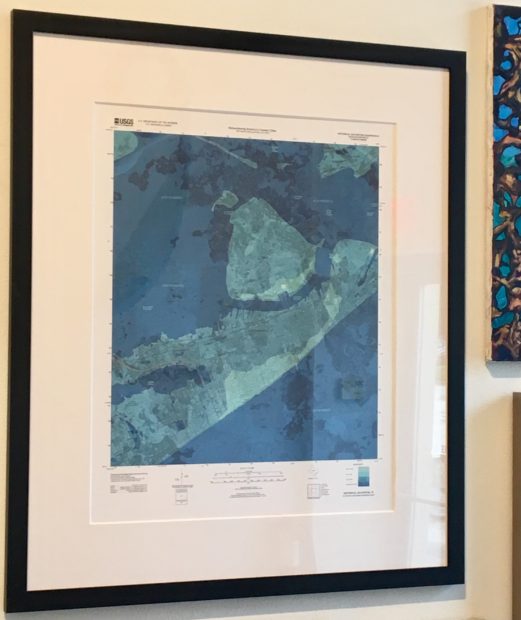 It’s easy to become entranced by any map; the way they simultaneously represent large swaths of land yet are rife with the most minuscule of details arguably make them works of art in their own right. As Hagen imagines a Galveston drowned by climate change 500 years into the future, he certainly takes a utilitarian approach, using various shades of blue to indicate water depth. But the navies, turquoises, and baby blues that populate this apocalyptic map invoke the same level of serenity as if we were staring out at the ocean on a warm summer day. This work goes beyond didactic climate-change fodder with a full-throttle death drive that allows us to contemplate the earth returning to itself after we’ve drowned ourselves out of it. 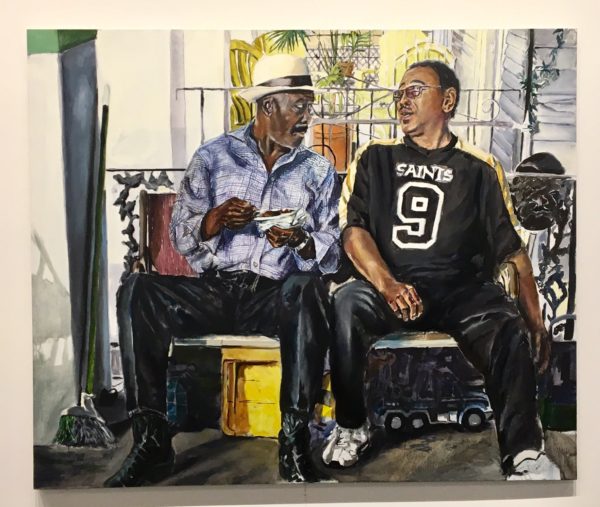 The title and the subject matter of the painting are pretty straightforward: there’s two grown men sitting on a bench talking to each other while one of them is eating something that looks like brisket. What infuses Baptiste’s painting with a quiet tenderness are small details that command the body language and chemistry between these two men. The way in which the man in the button-down shirt’s left shoulder slightly dips toward his counterpart as he looks him directly in the eye, and the way the other man leans and cranes his neck slightly upward indicate a kind of ease and familiarity. For all we know, the two guys could be strangers making awkward conversation at a party, but Baptiste is asking us to glimpse at what feels like a friendship spanning decades. The Saints jersey is a bonus. 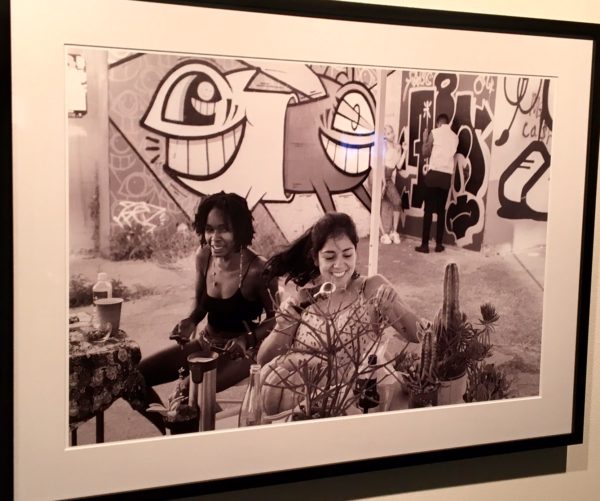 What are these two women up to in this cactus-laden hipster paradise? The one with the ice cream scoop looks way too excited about her ice cream. There’s more than a hint of mischief in her expression — she’s probably putting something gross in someone else’s food. Her friend behind her has an “I’ve been down this road before” look on her face, as if she pretends to be appalled at all the sly things her friend does but secretly loves it. This interaction could be totally innocent, but regardless, Moras deftly captures the way women can be silly/uncouth/inappropriate/perverted with their female friends. 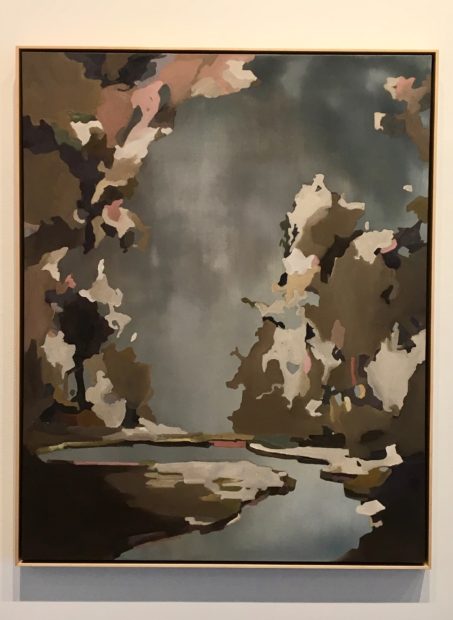 With patches of white, this murky camouflage landscape painting feels simultaneously dreary and illuminated. The background, however, is eerily disconcerting: there’s a continuity in the brushstrokes among the grayish background between the sky and the stream, making the entire landscape feel unmoored, as if it could fracture off or float away into oblivion. 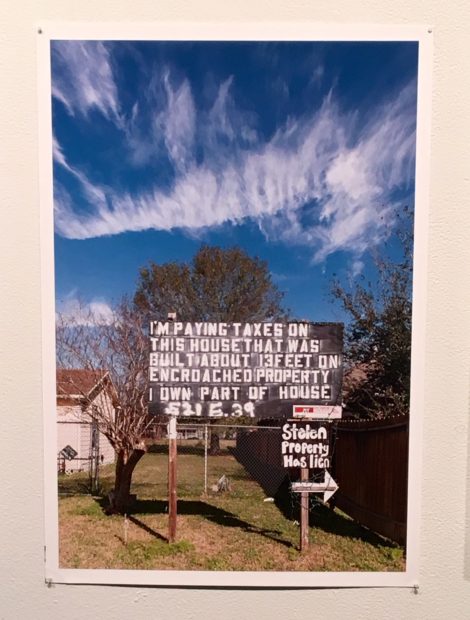 We usually don’t get to pick our neighbors, which can lead to personality conflicts and tension and passive-aggressive exchanges. Hester’s photograph, however, documents an overtly aggressive conflict between neighbors as one has apparently encroached upon the property of another. We don’t know for certain where this was shot, but the scene definitely has a take-care-of-business Texan mentality to it, and the handmade sign (with a very specific tax lien declared on it) comes with a certain degree of charm — the owner of the sign even decorated it with Christmas lights. But it also underscores the agitation and growing pains a lot of Houston is experiencing as gentrification, and all the cookie-cutter three-story town homes that come with it, overtake its neighborhoods. Additionally, Hester dedicates half the frame to the wide open sky, with cirrus clouds seemingly forming their own demarcation against a deep blue. 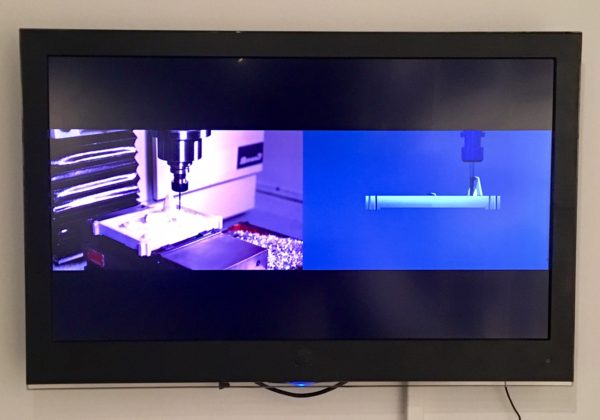 Everything about this video is banal, and intentionally so. Goss takes us on a two-channel journey of a machine carving out a digitally-created sculpture. We get occasional close-ups of a drill carving swirling lines into the material, although it looks like it’s simply sifting through rubble. The precision and incessant hum of the machine pair gorgeously with Goss’ poetry, his voice methodically, mechanically recounting a failed relationship — and we can feel the anxiety of the possibility that he or the machine or both could glitch out in despair at any moment. 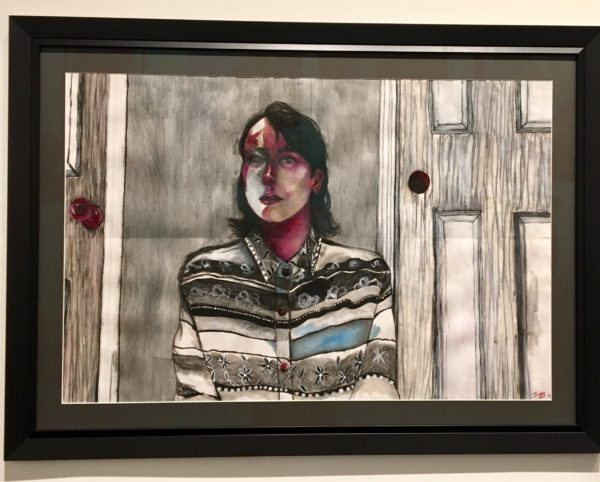 This work should be cropped a little tighter because all the magic happens in this woman’s face. West pools fuchsias, reds, and burgundies in the shadow of her neck, bisecting her face, searing along her forehead. It’s coupled with pockets of white and beige falling down her cheeks and along her jawline. She faces the viewer poised, but the temperature of her face gives way to internal strife, racing between shame, rage, and paralysis. 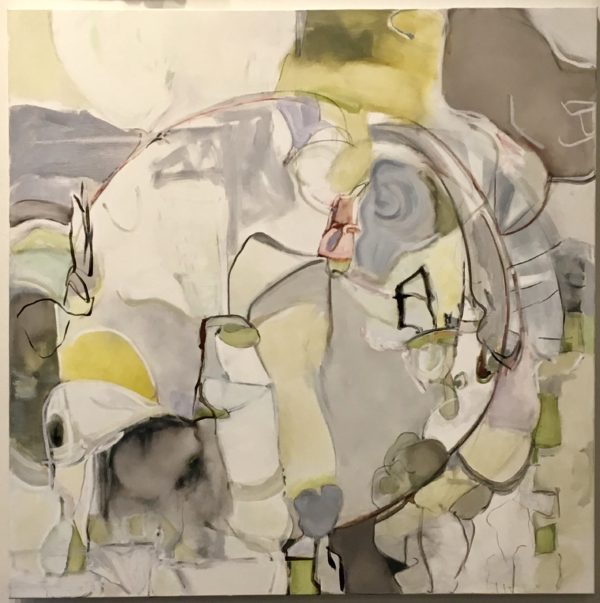 The title suggests a person who is perhaps oblivious to or hindered by the particularities of her own vocation. But James’ formal decisions dictate a story much more introspective, gripping, and sinister than that. Throwing us into a visual vertigo, the work has our eyes swimming in circles, pulling us into a vortex that feels like a storm or a flushing toilet. At the helm is the head of what looks like a tapeworm shrimp skull simultaneously swallowing and vomiting smoke. 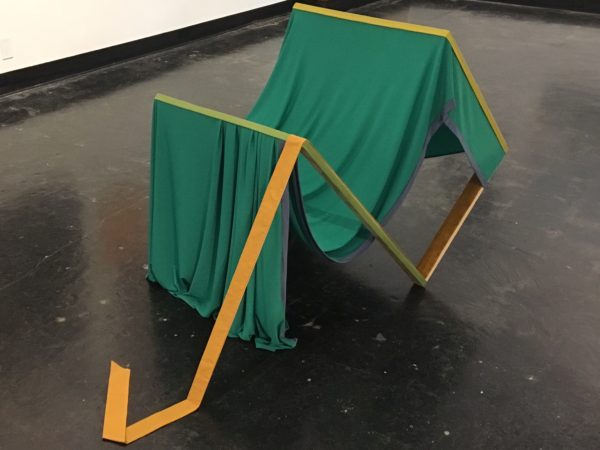 To be honest, I didn’t even notice this piece opening night. But in a way, that’s kind of the point. Heinlein’s work hinges on paradox, so it’s critical that Trap looms as a formidable presence that could also render itself invisible in a crowd. Structurally, it tip-toes between furniture and a child’s fort. It’s a sculpture that talks like a modernist painting: diagonal stripes cut across a swath of green fabric theatrically revealing and concealing nothing in particular. The greens and oranges of the fabric are both bright and deadened, as if Heinlein sucked just enough color out to make it, and us, feel empty.

The Big Show’s big awards: a grand each...

Such a succulent article. Full of great insight.