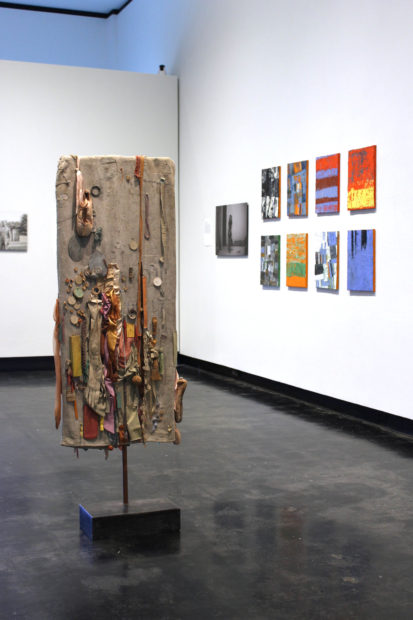 The show curated by Rino Pizzi and currently on view at Lawndale in Houston is more complicated than it first appears. ArtFiction: Ten Fictional Modernists from Texas inhabits a traditional gallery space and has a catalogue available for purchase, but here, a complex collaborative orchestration is key: writers, including curators, critics, and art historians, have created fictional biographies of ten Texas-based artists, some of whom fit the visual and written rhetoric of postwar art. Then, ten real artists were assigned these biographies and asked to create work as one of these personas. Then actors posed as the artists for photographs. This exhibition is a lot of work—for those involved, and, in particular (I imagine) for the curator who coordinated thirty people and oversaw the project—and also for the viewer.  And work on the part of the viewer, particularly as it relates to modernism, isn’t such a bad requirement as long as it succeeds. 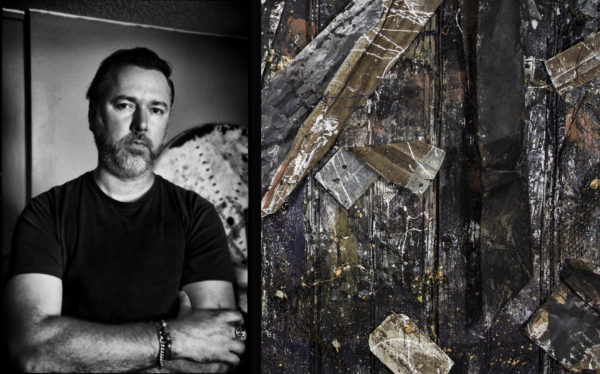 One of the strongest collaborations comes in the form of “Iris O’Connor Hardy.” Katie Robinson Edwards, author of the most recent and most comprehensive (real) book about Texas Modernism, Midcentury Modern Art in Texas (University of Texas Press, 2014), offers a biography of the fictional Hardy as a close friend of Forrest Bess. The faux archival documents serve as evidence and the paintings appear as though Bess heavily influenced Hardy’s work. Often, the writers of the collaborations rely upon some non-fictional name drops to set the scene (i.e. Betty Parsons, Meyer Schapiro). Hardy’s narrative is among the most convincing textual offerings.

But another crucial element to the project is the Texas of all this. As the show’s title asserts, these modernists are from Texas. Pizzi discussed this exhibition on the opening night in terms of suggesting the “missed” modernisms and, here, I think the show is at its best in inviting the viewer to consider what other modernisms have been left out, avoided, or possibly forgotten. ArtFiction offers an inclusive modernism—a respite from the kind of white, straight, manly modernism that has more recently been revealed as resting on a faulty and false pedestal. So ArtFiction offers an alternative route through history, away from a Greenbergian modernism. Yet the show doesn’t define what “modernism” means in regard to these fictional artists, beyond a time frame, which is mostly the 1930s to the 1980s according to the catalogue. There are many forms of modernism, and while the exhibition points toward such an understanding, modernism’s role here is never clearly explained. Maybe Ten Artists from Texas would have sufficed for a title. 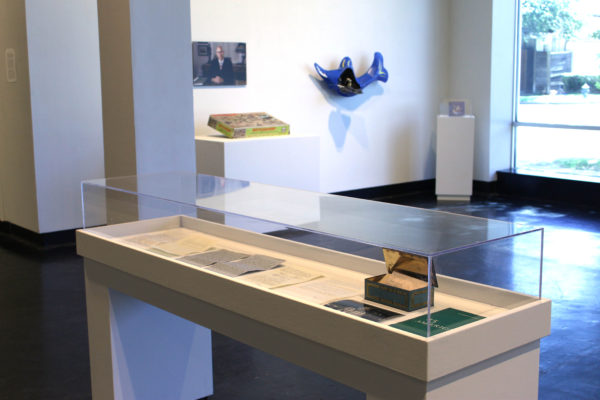 As for the objects in the show: I don’t think I ever would have believed that most of these art objects were created in the periods suggested. Let’s just say that in some ways, ArtFiction works better as an exhibition catalogue than as an actual exhibition. The catalogue and its use of the same images that appear in the gallery space functions better on the printed page. And the catalogue also offers a richer contextual—and textual—framework than the show itself. Perhaps the very idea of the show is stronger than the show itself. It’s not that the whole is poorly executed—it’s clear that a great deal of work and thoughtful care went into these multivalent collaborations—but the fiction is stronger in book form than in a gallery vitrine. The paintings, assemblages, and artworks look better in print than they do at Lawndale, and this maybe supports part of the exhibition’s aims: to use the gallery space and its mechanisms to provide reassuring signs of truth even in a fiction.

Some parts of the show do seem familiar: The fictional artist Morris Blodgett’s description and his work captures the hard-drinking machismo of the stereotypical abstract expressionist, and Hardy, as mentioned previously, fits a Forrest Bess-like moment (although she suffers for the comparison), and the invented Laura Fielding’s work seems to correspond to a Bruce Conner and/or Joseph Cornell aesthetic. Another fictional artist, Batsheva, fulfills the role of feminist performance artist and makes for a convincing narrative alongside her performance stills in the gallery. I wonder if this is because, unlike the other nine, her work ostensibly would only survive via the archival document; she doesn’t have the objects that might disturb the fiction presented. 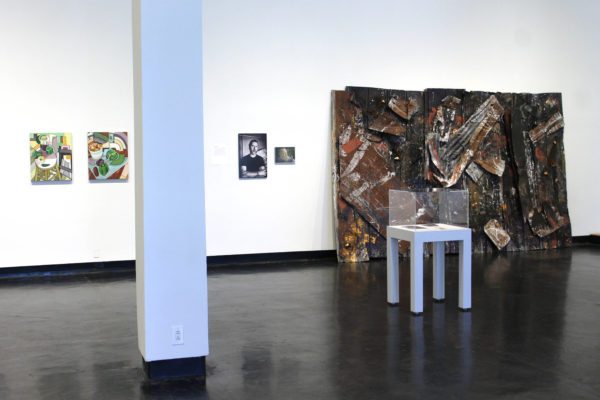 It’s impossible to not try to fit these artists into the pre-existing known canon; in fact, the exhibition invites the viewer to do so through its references to real parts of the art world. The authors’ narratives do create a thorough sense of the artists (even more so in the catalogue) and this encourages and rewards the viewer with some, if not a lot, of art historical knowledge. But again, moments within the artworks themselves stop the viewer from believing these fictions.

The ambition of the project—in scale and in idea—is admirable, and while the exhibition is clever, I would prefer to see the true stories of Texas modernist artists that haven’t been told often or at all. Some of these stories will be told soon such as the upcoming Dorothy Hood: The Color of Being/El Color del Ser at the Art Museum of South Texas and art historian Darby English’s book 1971: A Year in the Life of Color (due for publication this December by University of Chicago Press) which will feature Houston’s The DeLuxe Show. As for the ArtFiction catalogue, that can be where this exhibition succeeds best—in asking the viewer to think more about the modernist histories left out of previous discussions and canons. After all, the show did encourage me to reach for my copy of Edwards’ book and the handful of other books on Texas art, to revisit those previously written out of art history.

On view at Lawndale Art Center through Oct. 22.