by Chad Dawkins May 8, 2016
FacebookTwitterEmail 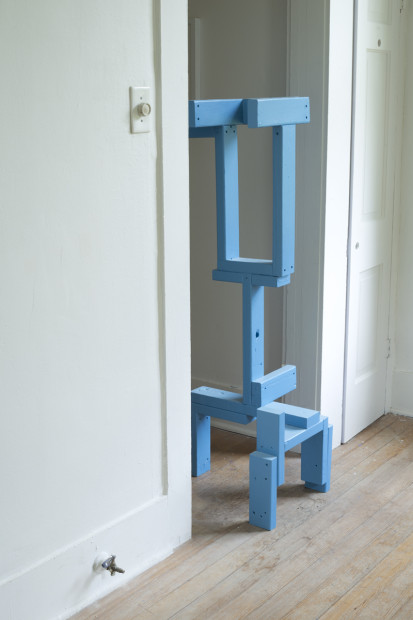 Sterling Allen’s latest show at Sala Diaz in San Antonio shows the potential and range of an artist working within a specific set of self-imposed formal constraints. (This is a hallmark of good work.) Working with prefabricated and found materials, Allen, an Austin-based artist, creates material boundaries within which his imagination flourishes. Within those boundaries, a limited range of colors and materials makes for a constant. Allen, being conscious of the diminutive, domestic, but radically informative nature of the Sala Diaz interior, has responded in kind with a collection of gentle, minimal objects and a handful of complex yet quiet photographs.

First off, this show marks a departure from what I’ve known of Allen’s past work. I’ve always equated his work with Allen’s keen understanding of formal technique, but also point-and-laugh humor, Technicolor arrangements, and the oft-comic tone of Okay Mountain (the well-regarded art collective which he co-founded). But that is not the case here. The punch line is slowed down and stretched: no fake bodegas, no skateboards, no comics. It’s a new body of work with Allen’s familiar precision and material manipulation, but without the graphics, splashes of colors, or comic imagery. In fact, there is none of the collage aesthetic so prevalent in Allen’s work up to this point. These pieces are stripped down to undisturbed surfaces of fundamental color. The amount of surface area and structure in the entire show amounts to the visual information I would expect from one puzzle piece of his earlier assembled, painted structures. Allen hasn’t completely abandoned his tongue-in-cheek approach—the tendency is there—but it’s diffuse and delayed. 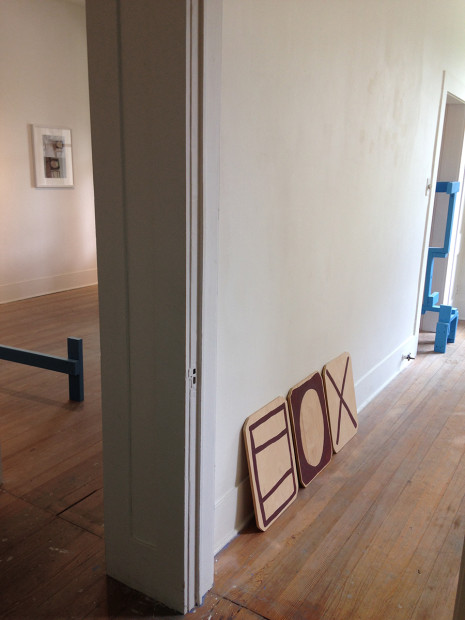 Instead, this exhibition presents a collection of sculptures and photographs that are hard-edged but friendly, airy, and light. The works are calculated and almost passive. The feeling is a comfortable greeting. It seems that more than before, Allen’s main formal concerns are more specifically that: formal concern. The edges and boundaries created by the pieces are as important here as the surfaces or content of the pieces themselves: the relationships of the objects in space as much as the relationship of the objects to space.

Taken individually, Allen’s painted 2 x 4 shapes mark out their place in the small gallery as pure blue lines. It’s like mark making in 3D; think Fred Sandback with thicker lines. All of Allen’s structures, including a stack of presumably found, white painted boxes, are like props of sculpture. By this I mean: the presence of these forms are stand-ins for the capability of such forms. 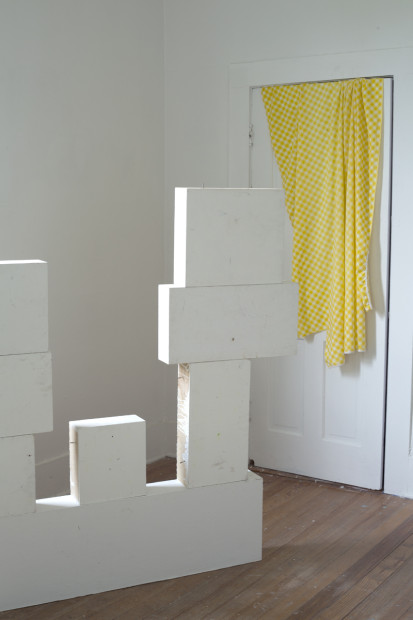 Allen’s simple shapes and colors interact remarkably well with each other and within the space. A pathetic yellow fabric draped over a closed door resonates in the room with one green box, one blue sculpture, and three barely there painted wood panels. As minimalism has taught us, the lack of visual information in the art brings into collusion all of the surrounding visual data: the view out the window, the dust on the floor, and the light switches—these all become part of the scene. And if you’re perceptive, you might find some surprises. 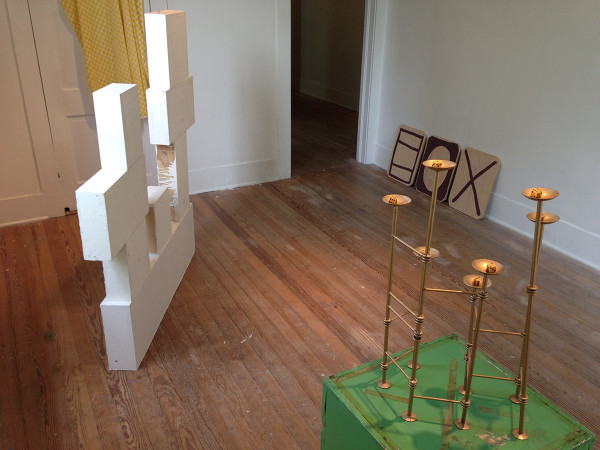 One construction involves a green painted trunk topped with a wacky gold candleholder, the candle cups holding dice. There are two framed playing cards at opposite ends of the space. So are these symbols—the cards, dice, gold candle holder—an allusion to illusion? Perhaps the quality of mysticism these cheap, popular magic props hold is akin to the ineffable quality of a work of art. Maybe Allen is equating here the symbols of access to something we don’t understand (the metaphysical) with the impossibility of understanding the possible spiritual affect of the art object. Though I doubt it. I think these are Allen’s red herrings. Allen hasn’t lost his wit. But perhaps the symbols point back to the chance operations working within the installation—the potential of the discrete object to shift and recombine into a new visual constellation. As a notion, ‘chance’ at least appears to offer a limitless variety of outcomes while relying on a strict pre-determined set of operations at work in the background. (Then again, the look of the mystical is just pretty hip right now. I just don’t believe Allen buys into it.)

There are a handful of photographs here. These pictures bring the disparate formal parts to a conceptual completion. Each picture shows us elements of the show, in place, but still a bit different from what we find in the installation. More so, the configuration photo is then re-photographed, creating another layer of separation between the physical object pictured and its actual presence in the gallery. The photographs make a nice balance to the static objects and reinforce the idea that these objects—these sculptures—are props. As in: “This is the sculpture sitting where the sculpture should be,” or, “This is what it looks like when the sculpture is sideways or viewed through a glass door panel, which if you turn around, you’ll see… .” They’re smart pictures offering a whole new lens through which to view the whole. I like them. 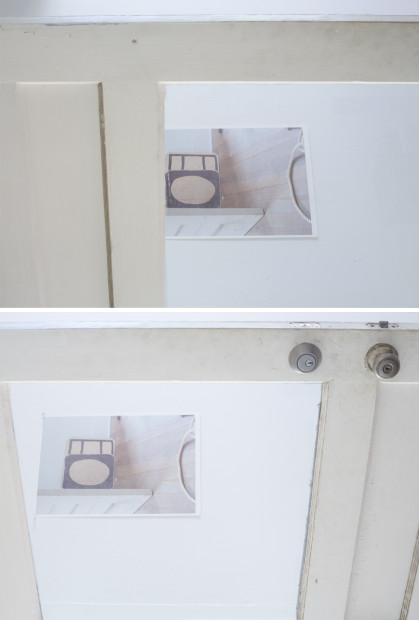 In fact, the photographs (and their process) point back to the procedural formalism of the objects. They show more fully the layering of the possibilities of working within Allen’s pre-determined boundaries, and the (perhaps) unending potential of those boundaries. And the photos highlight the phenomenon of perceiving sculpture in images—or even more so, seeing the world and all of contemporary art through images. Scrolling through Instagram, it’s easy to forget those images are only a single iteration of the potential view of a piece or a situation. It’s a prescient point that comes up when considering the photographic evidence of Allen’s objects in the rooms compared to their physical presence. By taking a less direct route to solving some visual problems, Allen has opened up the possibilities of interpretation, and granted himself more room to explore the configurations and layers his evolving approach has.

Editor’s note: Last week, an electrical fire that went through the space next door to Sala Diaz has forced Sala Diaz to temporarily close this show; it will reopen mid summer. No work was damaged. Keep an eye on Glasstire for details.