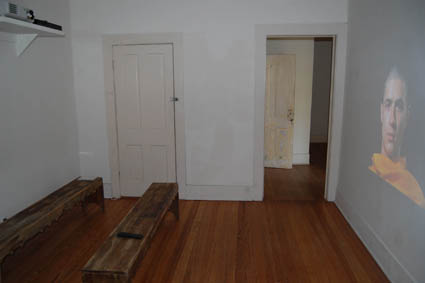 One of England’s best avant-garde filmmakers, John Smith isn’t adverse to narrative or humor. But his work is often anti-illusionist and tends to make viewers conscious of the artifice and construction of film. Fascinated by the power of language, he focuses on the ambiguity of meaning, showing how context in a film can change meaning. During a 30-year career, he’s made more than 20 films, which are featured in a retrospective at Sala Diaz as part of Contemporary Art Month.

Perhaps Smith’s best-known film, “Girl Chewing Gum” shows lots of people and activity in a busy London intersection shot in black and white. But an unseen narrator appears to be directing the action, telling people when to walk and birds to fly. Every random bit of movement turns out to be the invention of this invisible puppet master, much like the director of a film, or maybe God on a slow day. Smith says he got the idea while watching Truffaut’s “Day for Night,” which involves a film within a film. But as Smith explains, he filmed what happened on the street where he lived, and then directed the film afterwards. 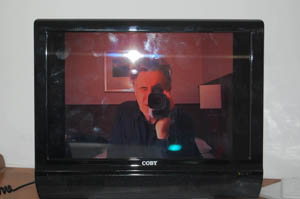 “The Black Tower” is probably as close to a suspense thriller as any experimental film ever made. A looming black tower, really the black-shrouded water tower on a hospital beside a cemetery, seems to be appearing and disappearing from the view of the narrator as he walks around his neighborhood. At one point, the film becomes almost abstract, with a triangular black form culled from the tower flashing in synch with the clip-clopping of the narrator’s footsteps. Sounding as melancholy as Edgar Allan Poe reading “The Fall of the House of Usher,” the narrator tells of his attempts to pin down the tower, which he finally finds, opens a door and “walks into the darkness.” Then a woman’s voice takes over the narration, and she’s, gasp, seen a mysterious black tower.

“Blight” also examines the changing cityscape, though this film deals more directly with the demolition of a neighborhood to make way for a highway expansion. Lyrical images of a construction crew tearing apart a building, bricks crumbling, dust rising and other visual evidence of demolition are intermingled with an image of a poster for the movie “The Exorcist.” Mixed into the soundtrack are phrases associated with urban dislocation, such as a man saying he’s sorry they’ve got to destroy the community and a woman reciting a poem with the refrain, “Kill the spiders, kill the spiders.”

But Smith’s films can be short and funny. “Om,” which is four minutes long, begins with what appears to be a chanting Buddhist monk wearing a saffron robe. Then hands appear with a barber’s clippers making an electrical humming sound, much like the chanted “om.” The barber shaves off the man’s hair. The young man then throws aside the yellow sheet and lights up a cigarette, looking like a skinhead. 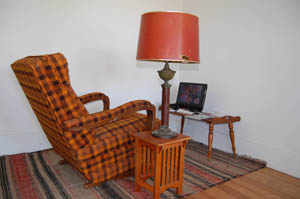 Smith often uses language to set up expectations, which he undermines with visual images. In the seven-minute “Associations,” words appear to be responding to visual images, or maybe vice versa, in a narrative about the semiotics of language. In the one-minute “Gargantuan,” Smith describes the beauty of a monster lizard, which turns out to be a palm-size newt. The five-minute “Waste Land” features T.S. Eliot reading his famous poem as the narrative for images shot inside a pub’s toilet.

Perhaps the most poignant film is “Lost Sounds” made in collaboration with Graeme Miller. The lost sounds are found on discarded cassette tapes, which Smith spotted on the street and filmed. Then he used the found tapes as part of the soundtrack mixed in with street sounds. So, for example, an image of a tangled clump of audio tape wrapped around grass on a rainy street corner is accompanied by the sunny West African pop music recorded on the mess of tape. The music can be distorted and riddled with static, but the variety of musical styles reveals the various waves of immigrants from around the globe moving into the English neighborhood.

Smith calls his latest series of films “Hotel Diaries,” and that’s exactly what they are. Traveling around the world to show his films at festivals and museums, Smith recorded journal-like videos in his hotel rooms. Lacking the verbal and visual surprises of his earlier films, these “Hotel Diaries” consist mainly of the artist’s musings on the happenings of the day, from the war in Iraq to what he had for dinner, and images of odd things in his rooms, such as ceiling tiles being blown upwards by the wind.

Smith’s films are enthralling in a cerebral way, much like good conceptual art, that avant-garde filmmakers often reach for, but fail to grasp. Rather than considering narrative an evil to be avoided, Smith employs narrative to tweak, manipulate and undermine the viewer’s expectations. What you see is not always what you get; instead, Smith makes us aware of how much of what we perceive is a mental construct.

Sala Diaz is presenting the anthology of 20 films in a series of three different 90-minute programs through Sunday, March 28. Screenings will be at 2, 3:30 and 5 p.m. Thursday, Friday and Saturday. Sala Diaz (210-852-4492) is located in an old duplex in Southtown at 517 Stieren. One room is set up with a projection screen and benches, while the front room features a comfy chair and a DVD viewer. Smith’s films rarely have been shown in the United States, so this retrospective is something of a coup for one of San Antonio oldest artist-run spaces. 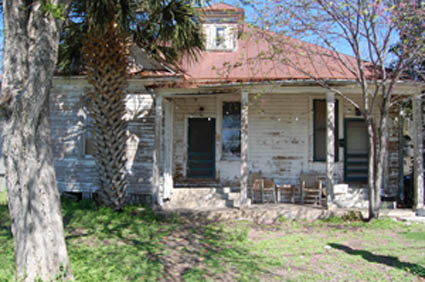 I’m lying, I promise – film and video works by John Smith, winner of the Artists Choice Award at the 2010 Cammy Awards held last Saturday, has been held over until April 3rd. Sala Diaz will be open Thursday – Saturday, 2pm – 6:30pm for your viewing pleasure.