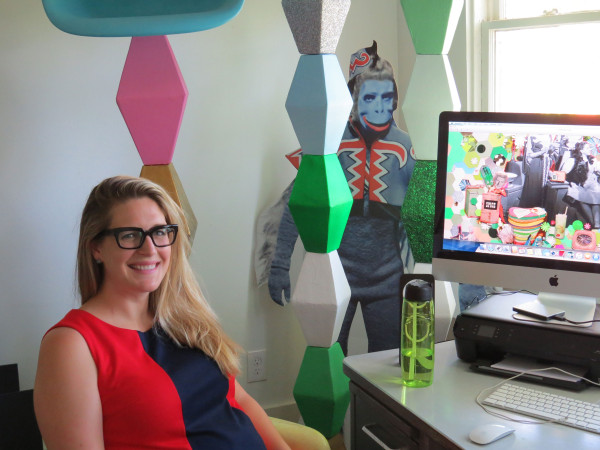 Kelly O’Connor in her studio. Photo by the author.

San Antonio native Kelly O’Connor, whose exhibition at Houston’s David Shelton Gallery is on view through May 28, has spent much of the past decade creating dense collages of fairytale characters and pop media icons, the majority of whom are women. Inspired by America’s national theme parks, many of which O’Connor visited as a child, her works employ an exuberant psychedelic sensibility that reflects what she considers to be our culture’s expanding preoccupation with fleeting artificial happiness. In her more recent work, she shifts focus from the places we might visit for momentary joy to the products and procedures that temporarily uplift or embellish us. Running throughout her work is a darker undercurrent that suggests that people’s flashy or blissful facades often mask an embittered and sorrowful interior life. Looks can be deceiving in O’Connor’s art, and much of it harbors a feminist perspective on the ’50s and ’60s Mad Men who pulled the strings that shaped today’s consumer behavior. 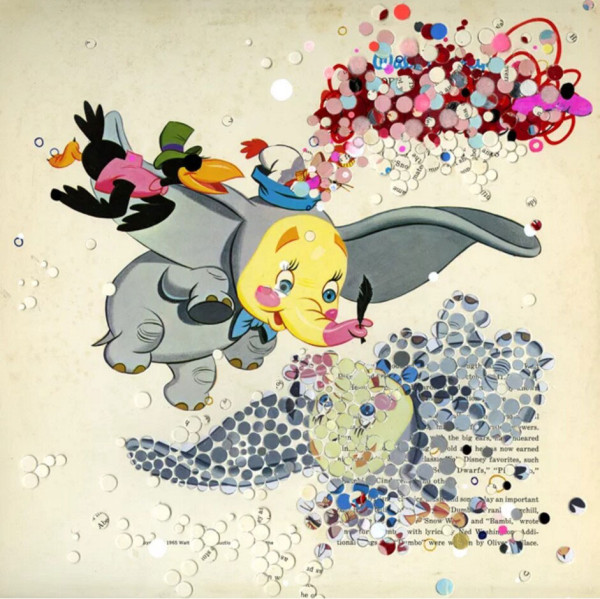 While earning her BFA at the University of Texas at Austin, O’Connor received a grant to visit Disneyworld to observe extreme examples of artificial landscapes in 2005. The following year, she began working as a studio assistant to the late Linda Pace, and thus was introduced to Pace’s contemporary art collection (today O’Connor is the Linda Pace Foundation’s Collections & Exhibition Officer). On discovering that Christian Marclay and Dario Robleto made art using or based on album covers, O’Connor decided to follow suit. In early collages such as Dumbo Desire (2006), she used an album cover for a composition that shows the Disney elephant, with Jim Crow at his side narcissistically contemplating his reflection. To create the latter image, O’Connor punched holes into the album cover and filled the holes with various colors cut from other albums. 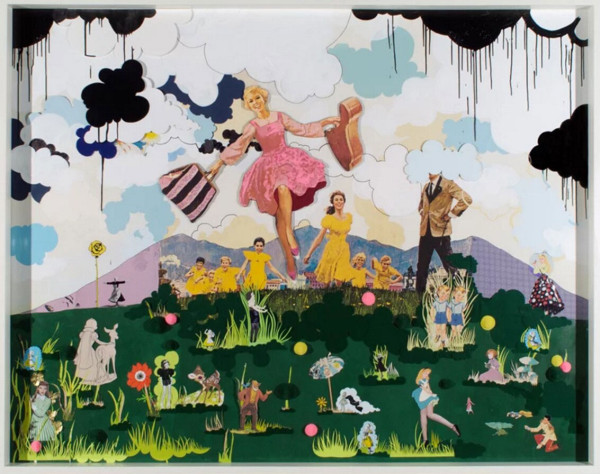 By 2009, O’Connor began to focus on the female in pop culture. In her large-scale collage Magnetic Fields, she used cutouts from magazines, album covers, children’s storybooks, and coloring books to create a lush mythical fantasyland where her heroines intermingle in a non-linear narrative. Heading the pack in this scenario is Julie Andrews in The Sound of Music, leading the von Trapp children on one of their musical outings. This image marks a turning point for O’Connor, as the theme of a bright facade masking a dark side (in this case, a family keeping up appearances while living in fear of the Nazis), has prevailed in the artist’s work ever since. Other heroines in Magnetic Fields include Judy Garland—O’Connor’s favorite example of a movie star with a tragic private life—as well as several Disney heroines (Alice, Cinderella, Sleeping Beauty, and Snow White). The few male figures present are given subordinate roles. Captain von Trapp is shown with his head buried in a cloud. 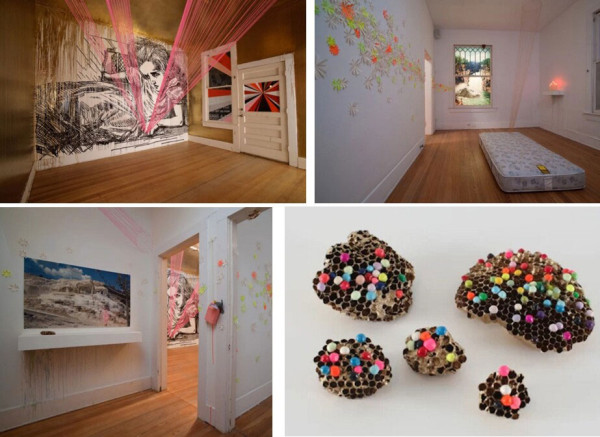 In 2010, O’Connor created her first site-specific installation, Worn by the Sun, at the artist-run space Sala Diaz, in San Antonio. Responding to the vintage duplex’s age and several wasp nests on its front porch, O’Connor transformed its rooms into an outlandish and creepy environment, with areas devoted to Alice as a giant after entering the rabbit hole, a deteriorating bedroom with a faux view of a waterfall from the 1984 film The NeverEnding Story, and a blown-up postcard of Yellowstone Falls. Throughout the installation, she juxtaposed kaleidoscopic light ray patterns and groupings of hand-cut paper flowers with sculptures made by dipping wasp nests in gold paint, and filling the empty holes with Sculpey “eggs” brightly painted with nail polish.

In her much of her collage work, O’Connor has repeatedly employed psychedelic light rays and hexagonal patterns derived from wasp nests to reference the escapist pleasure-seeking that dominates American culture. In Pure Imagination (2011), these patterns are dazzling backdrop to Gene Wilder as Willie Wonka, the master puppeteer who symbolizes the male-controlled culture of mass media and advertising that dominated the 1950s-60s. Among his victims are the women shown in O’Connor’s “Valley of the Dolls” series, who, like the characters in the story, are addicted to escapism through pills that turn them into girls with kaleidoscope eyes. In more recent collages such as Bottom of the Pool #1 (2013), O’Connor focuses on the synthetic, determined “relaxation” of health spas and resorts. 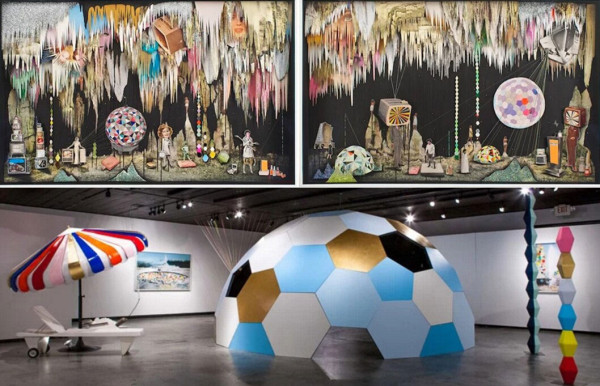 In 2012-13, O’Connor turned her attention to the notion that if excessive overindulgence leads to burnout, then what might eventually remain is a post-apocalyptic civilization. Inspired by the Plato’s cave allegory and based on a postcard of Carlsbad Caverns, O’Connor’s collage diptych The Rise and Fall (2012) reads like a visual morality tale, where fashion models of the ’50s and ‘60s have been transported, Rod Serling-style, to live forever in a cave cluttered with obsolete beauty products and dilapidated televisions. Their presumed gods or leaders could very well be the geodesic domes that seem to illuminate their space from within. In O’Connor’s 2013 installation Last Resort, at Women and Their Work in Austin, the viewer becomes the transplant in an otherworldly terrain of a chaise lounge contextualized as a 20th century artifact, multicolored columns based on Brancusi’s Endless Column, and a human-scale geodesic dome with wasp nests on the interior. Inside the dome, visitors can listen to the soundtracks from 2001: A Space Odyssey and The Shining. If you’re looking to find your happy place, this probably isn’t it, despite all outward appearances. 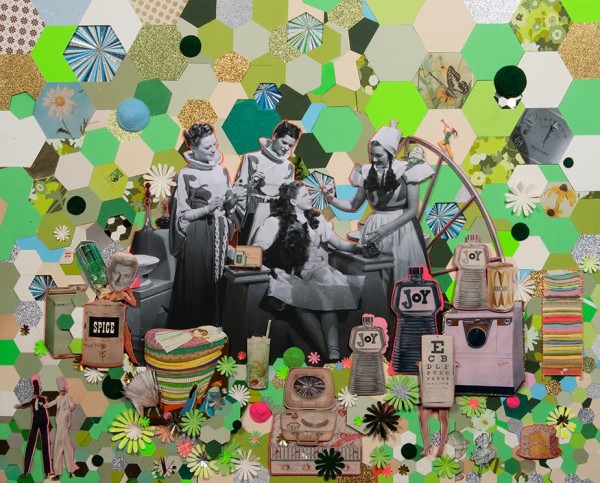 O’Connor’s most recent efforts reflect on how the feminine product industry continues to shape and control women’s identities. In a series of collages, O’Connor neatly displays such products like sterile specimens for study. For her exhibition at David Shelton Gallery, she created several collages with images of women from vintage fashion magazines who are over-embellished with floral and hypnotic adornments that recall the late ’60s aesthetic of Rowan and Martin’s Laugh-In. She also veers in a new and timely direction with her collage Died to Match, which uses the iconic scene from The Wizard of Oz when Dorothy is being primped in Emerald City, and asks if her eyes can be dyed to match her gown. Surrounding this vignette is a psychedelic, emerald green field of plastic consumer products. Beyond a meditation on the beauty-industrial complex, Died to Match touches on pressing issues such as recycling, cloning, and genetic modification. The title alludes to Judy Garland’s untimely demise, as well as to the potentially unsettling fate of our planet.

I so wish Dumbo’s reflection was a mirror image (it’s backwards –I’ve looked in the mirror enough to know). It would make more immediate visual sense.