For Part One in this series, please go here. Part Two is here, Part Three is here, and Part Four is here.

Sala Diaz is a community resource. One of the ways this mission of the gallery is fortified is through the tendency of artists to find expanded zones of creative play in the atmosphere of total freedom that Sala provides.

This week, James Smolleck steps out of the frame into his 2012 project Neophyte Doublestare Into the Eighth Dimension.

In 2010, while Hills and I were on a team installing Jesse Amado’s Days, a public artwork at the San Antonio Central Library, Hills asked if I would be interested in doing a show at Sala Diaz. I agreed, even though I had not made any work in the past couple years. Previous years of solely focusing on working with commercial galleries had resulted in complete burnout, and my work had become predictable in both execution and result. I knew I had to take it in a new direction, but was completely unmotivated and lost. Putting together a show for Sala Diaz would be the perfect opportunity to find a new spark. 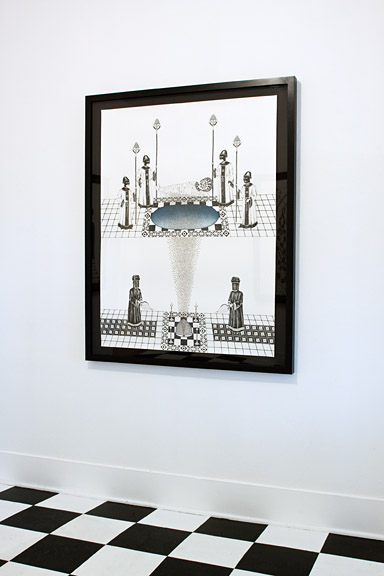 Well, two years pass and in early 2012 I get a call from Hills saying he has my show scheduled in March for Contemporary Art Month. That was only a couple months away, and having moved into a new house just a few years prior, I had not yet built out my new studio. Instead, I had been making work in the room that was to be my studio, but the space was unfinished with lights clamped to exposed studs. The room was nowhere near the type of space I was accustomed to. Even though I was totally out of my comfort zone, I had begun working on some collages and large-scale ink drawings. With no clear idea of where the work was going, I just put myself on autopilot and went at it. This was completely opposite to my earlier approach of making work, where I would spend too much time overthinking things and talking myself out of good ideas.

When working on past shows, I never thought about how the work would exist in a space or about the dialogue it would have with other pieces. However, now I was finding myself addressing the space in its entirety; in a nutshell, the rooms of Sala Diaz were starting to dictate the direction of the work. 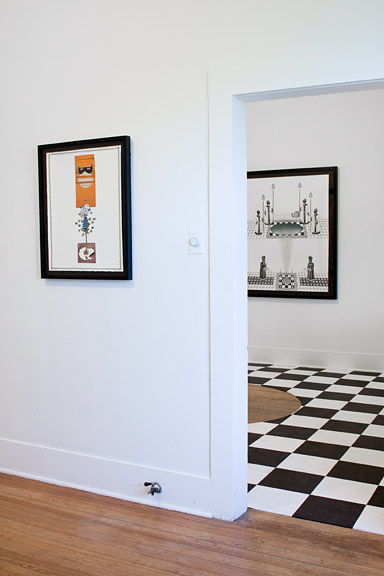 About a week before install, I decided I needed to address the space itself. To this point, I had no idea what I was going to do, but I felt like I owed it to Sala Diaz to take my work where it had not gone before.

So, as I am down at Sala Diaz late one evening trying to get some ideas, I notice the ornate wood working on the space’s windows and how it recalls some of the architectural details and patterns in my own work. I started to have a sensation as if I was literally inside one of my pieces. Next thing I knew, I was painting the walls of the gallery and had laid down a new floor in Sala’s front room that mimicked the floor in one of my drawings. The space was transformed and became part of the piece. 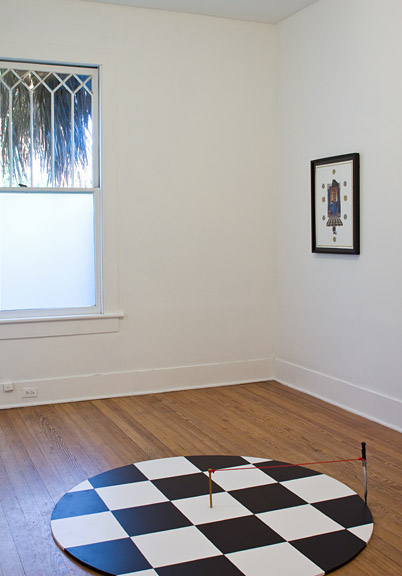 This new way of working within the rooms of Sala Diaz was encouraging; it was totally foreign to me and completely welcome. Also, the need to make quick decisions for my show lead me to approach creating my work in a new way. Because I didn’t have time to overthink decisions, I relied on my instincts. I allowed my subconscious to direct my work.