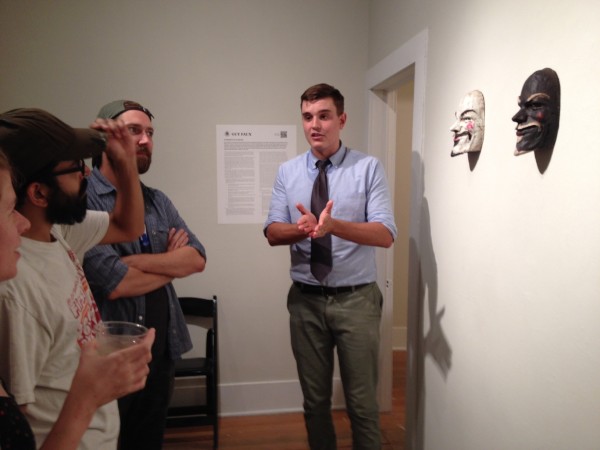 “Does the everyday rub you wrong? Do you feel alienated by societal structures? Are you uppity? You should act. Now.”

This was the call to action. By entering Sala Diaz on the night of July 31, one was entering the gallery-turned-sales office of the Seditious Industrial Complex Licensing Office. Complete with chairs in a waiting area and pesky sales associates, hard sales were underway and visitors were eating it up. The Seditious Industrial Complex (SIC) is the brainchild of Daniel Morgan and Stevan Živadinović. For this outing, Živadinović was implementing the ideas of the duo with the help of performers Abigail Entsminger, Seth Larson, and Billy Muñoz as the licensing technicians and Drew Garces as “the artist.”

The approach has potential, and I want to see more of this in San Antonio. Keep reading; I’ll explain.

In brief, the exhibition at Sala Diaz included three posters mounted to the walls—large format documents of patents and licenses; waiting-room chairs; a desk, a plant, and Guy Faux masks on the wall and on a shelf. More important were the transactions taking place. The small space was filled with the pretense of a car dealership mixed with the aggressive customer-knows-nothing approach of an Apple store. But people were buying masks, plaster molds to make the masks, and licenses for use of SIC patents for durations of time—including the “method for setting fire to a Wal-Mart.” Surprisingly (to me), people were really getting into “being customers” as much as the performers were dutifully fulfilling their roles as sales people. I don’t participate in participatory art, so I was just there to observe. I realized it didn’t matter. 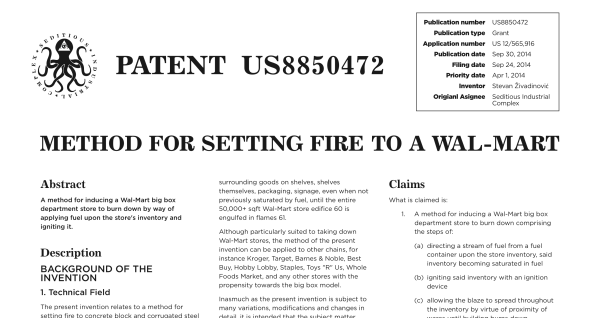 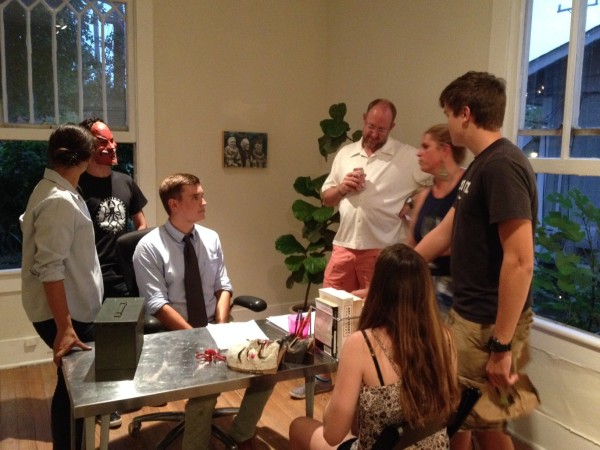 I tried derailing one of the performers, and she was having no part of it. And despite my non-participation, as long as I occupied that space, I was never allowed outside of the ritual experience of the licensing office.

The following day while in line at a real store, it occurred to me that, in fact, the real transaction I was participating in there was no different from the art one I had witnessed the day before at Sala Diaz. The store clerk was a performer and I a willing participant. The experience of being a customer is inescapable in our capitalist society; daily I suffer the same fate of experience as those who had chosen to participate at Sala Diaz the night before. So in that sense—the literal one—the SIC Licensing Office was a success. 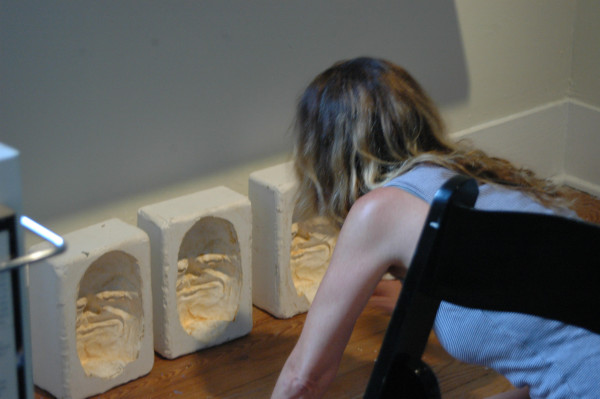 But the content fails as any meaningful sociopolitical critique. Here’s why.

During my time at Sala Diaz, I overheard the sales pitch: to sell a “packaged revolution.” I’m sure that the whole of this Seditious Industrial Complex is meant to be somewhat funny, and that this brand of humor is a hedge against serious subjects. But a send-up of consumer-driven economies or capitalism is worn-out and cliché at this point. My initial reaction to the show was a mix of derision and guilty pleasure in rebellious black humor. But the fantasy of burning down Wal-Mart and fighting the Machine by selling pirated Guy Fawkes masks (the familiar image of which is owned by Time Warner) is pretty silly, and the approach is shortsighted. 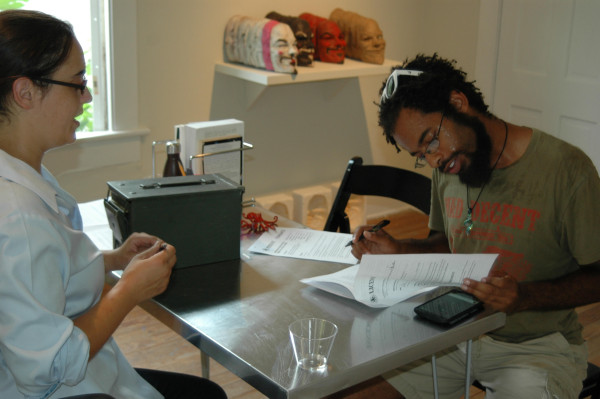 Setting up shop as the nefarious capitalist beast you seek to indemnify doesn’t so much reveal the troubling apparatus as it does prove your involvement in it. As I’ve written before, this sort of approach is a closed loop; it amounts to tautology. The main issue at stake here is an inability to let go of perceived notions of the future that persist as unfulfilled visions of the past. The revolution never happens. If it ever does, it’s not going to look like anything we imagine it to be. So revolution can neither be successfully represented nor mediated.

The conceptual basis of such an exhibition is inherently rooted in the Marxist idea that an analysis of capitalism involves the “unmasking” of commodities to reveal their fetishistic nature. It’s through this analysis that one attempts to understand production, dissemination, and significance of currency and exchange in a capitalist society. Practically speaking, problems arise when one is unable to step outside of the ubiquitous ideology in order to examine it with real objectivity. Therefore, the spaces we inhabit—the store, the exhibition space, the exhibition space-turned-store—are spaces made of the material, founded on the principles, and filled with the ideas one hopes to analyze. But this can’t happen when one is working with the tools and methods of the very system one hopes to critique. 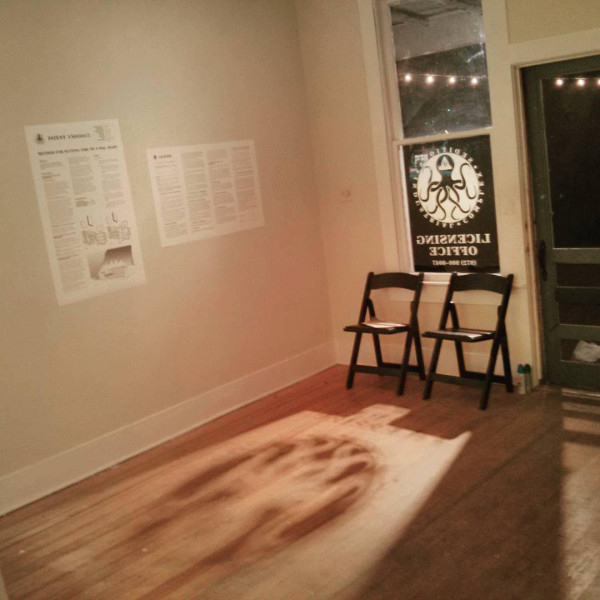 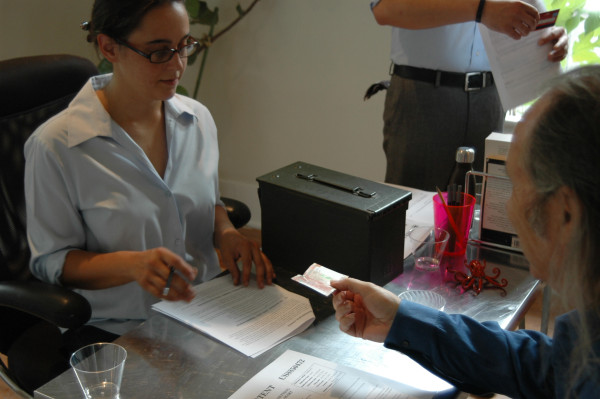 This is doesn’t mean that gestures created within the system cannot generate significant force to effect change. But this force is in itself a form of currency bound to ideology. Currency itself requires further examination. First, current: as in the present moment, common or generally used; but it’s also a body or force in definite movement. Secondly, currency: the quality of being common or generally used, or a system of money. Historically, the understanding of the condition of flowing like water led to the sense of a flow in the circulation of capital: hence currency.

So the circulation of an idea or image, especially one that’s generally used within a system, has currency as a form of currency. But what if the system you seek to disrupt (or represent to do so) is that of currency in the monetary sense? You can’t stop the flow of a material or ideology by adding more of that material or ideology to it. It must be stopped entirely. But like Mark Fisher has written: “It’s easier to imagine the end of the world than the end of capitalism.”