Multitalented artist — I first knew him as the drummer in Sexto Sol — Juan Miguel Ramos recalls The Banner Project, in which he populated San Antonio’s Milam Park, named for an historical figure, with images of people who lived in the city in the present of 2002. This work, brought into Sala Diaz by Guest Curator Henry Estrada, managed to compress the outdoor expanse of a public artwork into the confines of the gallery’s two tiny spaces. What is so very interesting is how that compression, once released the night of the opening, re-opened the public aspects of the work to an audience brought round again to yet another neighborhood in the city. You could’ve walked from one to the other, from Sala to Milam. You could’ve had conversations on the street as you made your way across town. With the casual discovery of a photo, Ramos also shares a reminder: life is short — have those conversations when the opportunities arise.

I became involved with Sala Diaz in 2002, after I had started on a public art installation done in collaboration with the Museo Alameda. The project was called The Banner Project and my contact and collaborator was Henry Estrada, who I believe was working at the Alameda at the time. After the project began, we planned an art installation at Sala Diaz based on the Banner Project with underwriting support from Henry Muñoz.

The Banner Project was essentially 25 vinyl banners installed on light posts around Milam Park, which is located in downtown San Antonio in between Santa Rosa Hospital and Market Square. I took photos of the park and the surrounding area including the hospital and the businesses around the park such as Mi Tierra restaurant. I also drew portraits in profile of San Antonians I knew and superimposed them atop the photos I’d shot. The opposite side of the vinyl banners had text that included snippets of anecdotes combined with historical information about the immediate area of the park. With these elements combined, you could get the impression that these different people were in a kind of conversation about the park as you walked around it. My idea was that these banners collectively provided an alternative, multifaceted history of this place that was named after Texas revolutionary Benjamin Milam.

For the Sala Diaz installation, the idea was to create a satellite Banner Project experience within the walls of the gallery. In the space’s main room, I installed vertical, rectangle-shaped vinyl text blocks along the top of the space’s walls. In the other room, I hung a single rear projection screen from the middle of the ceiling. The projected video was comprised of images of the 25 banners installed at the park.

What I remember most about the Sala Diaz installation is that on the day of the opening I accidentally knocked over a gallon of paint in the middle of the main room, and had a hell of a time trying to clean up all the mess up. I think I got most of it cleaned up before anyone else noticed. Also, I wasn’t very confident about my ability to build a proper screen for the projection, and Hills was incredibly generous and put the frame together for me.

I see the Milam Park installation and the Sala Diaz installation as very connected; they both required a lot of reliance from me on the city’s community, and the art community in particular. Because of the significance of the conversations and actions taken by the many people involved, I feel especially appreciative of these two projects. As opposed to many of my other exhibitions, which were mostly just me making some drawings by myself and trying to sell some of them, these projects were so much more about community. I don’t think I could’ve been a part of all of that if not for Sala Diaz being the kind of artist-centered space that it is.

I’m including a photo I saw on social media recently — my dad had found one of my banners in his garage. I gave the banner to Maria Ibarra, who was the subject of the piece’s profile drawing. She passed away a few days ago. For me, it’s a reminder that we all should appreciate the people who are special to us while we can. 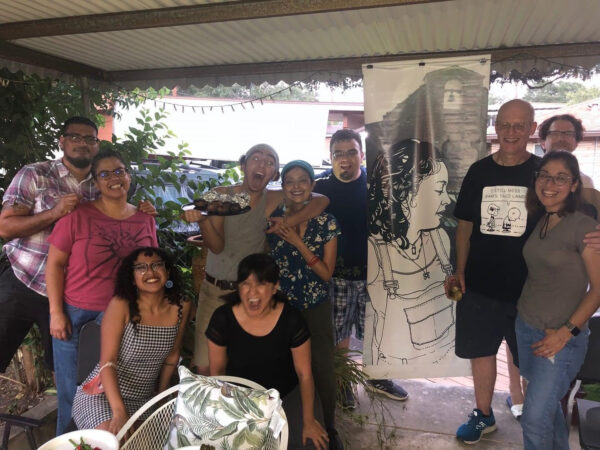