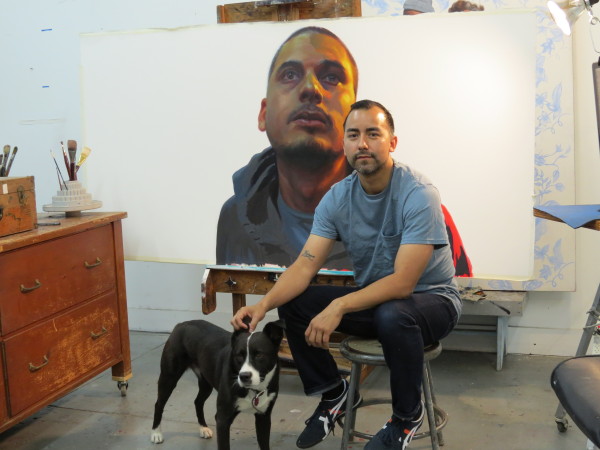 Vincent Valdez in his studio.

At the age of ten Vincent Valdez was painting murals under the tutelage of Alex Rubio, who was himself only 18 when they first collaborated. As a student at Burbank High School on San Antonio’s Southside, Valdez was given the blessing of his teacher to spend his days painting a mural in the student cafeteria, where he chronologically documented his favorite icons from rock-and-roll history. Concurrently, he attended SAY Sí, San Antonio’s distinguished after-school arts program for youth. Upon earning a full scholarship to the Rhode Island School of Design in the late 1990s, Valdez studied the Old Masters and copied some of the works from the RISD Museum collection. Challenged by one of his professors to create a “masterpiece,” the artist found his true voice when he began applying Old Master techniques to portrayals of Chicano subject matter. With his painting “Kill the Pachuco Bastard!” created for his BFA exhibition, he established his ongoing commitment to socially relevant art and set the tone and direction for all that has followed. 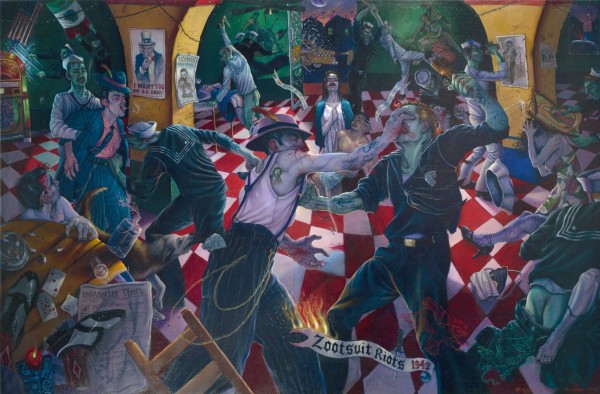 Set in an East Los Angeles barroom, “Kill the Pachuco Bastard!” tells the story of the 1943 Zoot Suit Riots, which were spawned by a Los Angeles Times news story that falsely blamed Mexican Americans (who wore a popular style of clothing known as a “zoot suit”) for a crime wave. In response to the article, racial tensions exploded and over 200 servicemen took taxis into the Latino neighborhood and violently attacked the zoot suiters. An avid motion-picture fan, Valdez decided to stage the narrative the way he imagined it might be shown in a movie, as a barroom brawl with a dramatic act (a Pachuco holding his own against his attacker) in the foreground, lots of action throughout, and imagery cut off at the painting’s borders as if the camera were slowly panning in towards the scene. Paying keen attention to iconographic details, Valdez included both a rape scene and a vignette of a praying woman embracing a fallen man in the manner of an Old Master Pietà. He also depicted a poster for Army recruitment, which seems somewhat ironic given the violence against Latinos by the military, and a notice for a boxing match, which would become the central theme of Valdez’s next significant body of work.

Exhibited at the McNay Art Museum in 2004, Valdez’s Stations is an epic narrative composed of ten large-scale charcoal drawings. A contemporary drama told in a cinematic style, Stations uses the framework of the biblical stations of the cross to tell the story of a boxer and the stages he encounters as he faces an opponent in a boxing match. With the number of stations reduced from fourteen to ten, to conform to the typical number of rounds in professional boxing, the drawings sequentially portray the boxer as he weighs in, faces his audience, stands alone against the world, receives moral support from his coaches, is knocked down and gets up again, is cheered on by his fans, is knocked down again to lose the fight, lies prone as if levitating, and ultimately is resurrected as a trading card. As is Valdez’s custom, visible faces in the drawings are his friends and family; they are actors in his dramas. The boxer, for example, is portrayed by the artist’s brother, whose classic facial features have inspired the artist to use him in subsequent series. Other participants include Valdez’s mother as a devoted fan (holding a fan photo that resembles a typical portrayal of Veronica’s Veil), and his father and former mentor Alex Rubio as the boxer’s coaches (shown as guardian angels). With Stations, Valdez proved himself to be a very capable bard, whose poetic renderings dramatize significant contemporary issues in both personal and universal terms. Considered within the context of the artist’s native Southside neighborhood, becoming a boxer is a common avenue for young men seeking to escape the trappings of the barrio. At the same time, Valdez’s narrative is an allegory for the physical, emotional, and spiritual journeys faced by all human beings as we move through life.

While Valdez was finishing up work on Stations, he received a phone call from the legendary guitarist and composer Ry Cooder, who was in the midst of recording his album Chavez Ravine, which tells the story of how the residents of Chavez Ravine, a Los Angeles Mexican American working-class neighborhood that had thrived in the 1940s-50s, were pushed out from their community in 1959 for the building of Dodger Stadium. As a way to expand the story beyond the music, Cooder hired members of a popular low-rider club to retool a vintage 1953 Chevy truck to look like one of the ice-cream trucks that typically drove through the neighborhood, and he was seeking an artist to adorn it with a mural. Upon seeing a reproduction of Valdez’s “Kill the Pachuco Bastard!,” Cooder knew he had found the artist who was up to the task; he brought Valdez to Los Angeles and set him up in a studio located within minutes of Dodger Stadium.

To prepare, Valdez conducted considerable research, which entailed studying historical records, news reports, photographs, and film footage, as well as interviewing onetime residents of Chavez Ravine and their families. After experimenting briefly with auto enamel paint, which does not lend itself to the depiction of fine detail, Valdez opted for oil and painted the mural over a 19-month period. Continuing his practice of staging events episodically, as they might unfold in a movie, he divided the car’s body into sections onto which he painted narrative vignettes. Moving from left to right, the story begins on the driver’s-side front fender and extends around to the freezer doors at the rear and across the passenger’s side until it culminates on the truck’s hood. Many of the historical scenes are painted in black and white, in reference to the past (as well as Hollywood’s film noir tradition), while symbolic and present-day references are executed in color. Mostly factual but with some fictional elements added, the vignettes include images of plans for promised relocation housing that never materialized, references to the McCarthy-era blacklisting of those opposing the redevelopment, portraits of the city and federal officials who spearheaded the drive to move the community out, a view from Chavez Ravine of Los Angeles City Hall, nostalgic images of once prospering life in the community, a replica of an eviction notice surrounded by mailboxes, poignant renderings of victims who lost their homes, and a view of a present-day ballgame at Dodger Stadium. In keeping with his love of movie memorabilia, Valdez painted the truck’s roof to resemble a vintage horror-film poster, showing a monstrous bulldozer devouring the defenseless neighborhood. He also emphasized the color red on the poster and throughout as a potent reminder that the incident occurred during the peak of the American anti-Communism movement.

After being shown in Los Angeles and Mesa, Arizona, “El Chavez Ravine” was exhibited at the San Antonio Museum of Art (disclosure: I had the pleasure of collaborating with Valdez on its presentation). For a time thereafter, Valdez moved back and forth between Los Angeles and San Antonio, and produced a video project that documented his extended families in both cities. Eventually returning to his native home, the artist revisited the boxer theme, while also devoting a body of work to the memory of a childhood friend who had served in the Iraq War and lost his own battle with post-traumatic stress disorder. Both series comprised the exhibition America’s Finest: Excerpts for John at the McNay Art Museum in 2012 .

America’s Finest features six large-scale drawings of individual boxers, each from a different ethnic background, who confront the viewer directly. In a shift from elaborate narrative to sparsely spot-lit soliloquy, Valdez presents these figures center stage; these are the working-class heroes who end up fighting our nation’s wars. Contrasting with the universal positioning of these anonymous figures is the very personal story of Valdez’s friend, whose funeral procession is depicted in Excerpts for John. With their barren backgrounds, the paintings of the procession portray the event as if it is emerging from a deep fog or mist. As he did in his “El Chavez Ravine” vignettes, Valdez fictionalized the narrative by placing the casket in a Civil War period horse-drawn carriage and having it travel through the streets of the barrio to the subject’s home. As part of his tribute, he also spent two years painting a monumental portrait of John, who is shown at close range in a style often seen in movie representations of war heroes, posed larger-than-life before a smoky combat landscape that here represents John’s tragic battle with PTSD.

Valdez’s next project began germinating after he came across the book Without Sanctuary: Lynching Photography in America, by James Allen and John Lewis.  Filled with disturbing images of lynched African Americans, the book chronicles the history of the horrific practice, revealing that postcards with these depictions were once as popular as trading cards. Intrigued but also frustrated that there was no documentation of such treatment of Mexicans and Mexican-Americans, Valdez began a series of paintings entitled The Strangest Fruit (an expansion on the Billie Holiday song title referring to the lynching of blacks). To prepare for the paintings, which made their debut at Brown University in 2013 before being shown at Artpace in San Antonio, Valdez enlisted Latino friends to serve as models, and together they reenacted poses as seen in the photographs, using carefully manipulated ropes. In the paintings, all emphasis is on the corpses. With the ropes removed from the image, these figures are isolated against stark white backgrounds and sheathed in golden auras of light; these martyrs from the not-too-distant past are treated with a reverential dignity that recalls Old Master depictions of the crucified Christ. More importantly, Valdez views these potent images as symbolic of present-day struggles faced by Latino men, such as racial profiling, police harassment, immigration hysteria, and unjustifiable imprisonment.

Some Animals Are Created More Equal Than Others, 2015, litho crayon on Mylar, diptych, 11 x 18 in. each section

Another literary work, George Orwell’s Animal Farm, was part of the inspiration for Valdez’s most recent undertaking, a diptych drawing that comments on the rapidly increasing American division between the “haves” and “have-nots.” In “Some Animals Are Created More Equal Than Others,” the artist shows a swine—with the combined facial features of J. Edgar Hoover and Henry Kissinger—who has just swallowed up another human being. Shown in a state of mutating decay that recalls Oscar Wilde’s Portrait of Dorian Gray and the prune-faced political imagery of Robbie Conal, Valdez’s monster is an honest warning sign of the times.

Excellent article! Kept me very interested to the end.
Thank you,
Susan Moss

This excellent commentary clearly offers the important connection between the artistic quality and the ethical-historical thematic inspiration of V.Valdez. Keeps the reader looking forward to the next exhibit of this great San Antonio artist.

Wonderful, I grew up in ELA!

Enlightening writing to say the lease!

I have had the great privilege of learning under the tutelage of Vincent Valdez. He has encouraged me in pursuing my visions and has helped me clarify my journey. This article was a pleasure to read from beginning to end. Thank you.