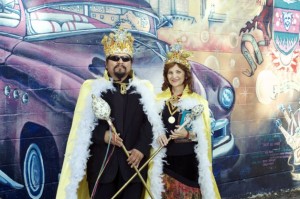 San Anto Cultural Arts has a new Executive Director: Harvey Mireles, former board treasurer for the San Antonio Community arts organization, and former Associate Director for The Society of St. Vincent de Paul, assumes leadership of an unsteady ship: since the untimely death of San Anto’s beloved founder Manny Castillo in 2009, the nonprofit has had two short-lived directors and three even shorter-lived interim directors.

The org also added three new board members: Ernesto Rubio, former Executive Assistant at the Office of Cultural Affairs for the City of San Antonio; Roxanna Salas, Director of Public Relations for Boss Creative, will be SACA’s new Public Relations Board Chair; and Adriana Garcia, former Adjunct Instructor at the International Academy of Design and Technology brings experience as an artist and educator.

According to a report  by Elda Silva in the San Antonio Express-News, in September, the organization’s board issued an open letter acknowledging concerns about San Anto voiced at a community meeting — a laundry list of issues including financial mismanagement, a high staff turnover rate and lack of leadership. The new Director and staff seem to represent the beginnings of a new era of stability.