Earlier this week, the City of San Antonio’s Departments of Arts & Culture and Parks & Recreation announced the completion of two large-scale murals at the Ramirez Community Center in the southwest part of the city.

The murals, Motivated Community and Joyful Momentum, mark the first time the City has partnered with the San Antonio Street Art Initiative, an artist-run nonprofit organization established in 2018. A trio of Latina artists, Adriana Garcia, Manola Ramirez, and Maria Ramirez, designed and painted the pieces, which combine realistic portraiture with a more flat and graphic design-inspired style. The press release notes that Ms. Garcia, a veteran of the San Antonio mural scene, was selected for her use of color, community approach, and expertise in realism. The Ramirez sisters, who are part of Lavaca Studios, a female collaborative space in the south side of the city, were selected for their graphic aesthetics, use of color and font, and whimsical style.

Department of Parks & Recreation Assistant Director Nikki Ramos noted, “The Ramirez Community Center mural project is the perfect example of how inter-departmental collaborations can work to beautify our existing community spaces. Through community participation and input, this mural gives this space identity and creates pride among area residents.”

Department of Arts & Culture Executive Director Krystal Jones added, “Murals are having a major moment right now and this is an excellent example of how meaningful creative work can help express and support a sense of neighborhood history, culture and belonging. We are delighted to have partnered with the nonprofit San Antonio Street on this project and hope that the community will find these stunning public works of art to be invigorating and inspiring to all.” 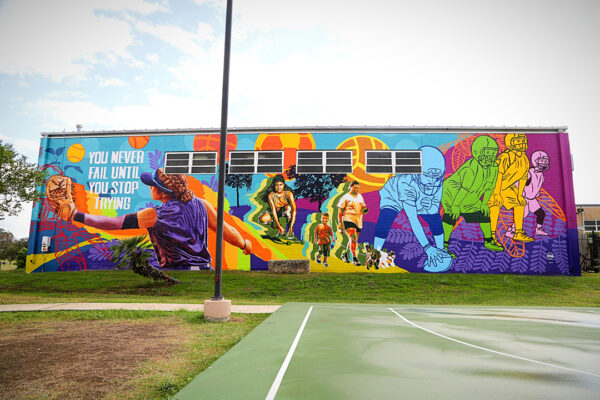 Motivated Community, the larger of the two murals, activates the back of the community center building and incorporates community members who frequent the facility. Including depictions of softball, skateboarding, family walks, and football, the colorful piece highlights a variety of activities. Native foliage is brought into the background design of the work, and large bold white lettering in the foreground reads, “You never fail until you stop trying.” 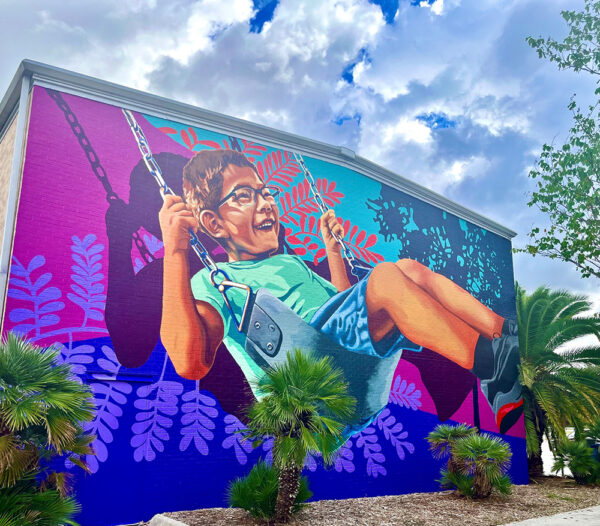 Joyful Momentum, a smaller work on the west side of the building, brings in the same design aesthetics while featuring a singular figure. A larger-than-life young boy with a wide smile launches forward on a swing set. Together, the brightly painted works bring a pop of color and joy to the building. Notably, these works are the first in the City’s public art collection to include a theme of sports and recreation.

The City of San Antonio Unveils a Large-Scale...