This week, the University of Texas’ Blanton Museum of Art told Glasstire that they have acquired Vincent Valdez’s large-scale paintings The City I and The City II. These pieces were introduced to the public through a 2016 New York Times article that described the haunting power of the works—The City I shows a group of men, women, and children clad in Ku Klux Klan outfits, and The City II depicts a pile of mattresses and trash strewn across a landscape behind a smoking steel drum. (Read Christina Rees’ response to that article here).

Both works were initially shown last fall in Valdez’s 2016 exhibition The Beginning Is Near (Part I) at David Shelton Gallery in Houston and will be on view in Austin at the Blanton from July 22, 2018 to December 30, 2018 as one of the museum’s new Contemporary Project rotations. The paintings come to the Blanton as a purchase with support from Guillermo C. Nicolas and James C. Foster with additional support from Jeanne and Michael Klein and Ellen Susman (for the full credit line, see the image below). 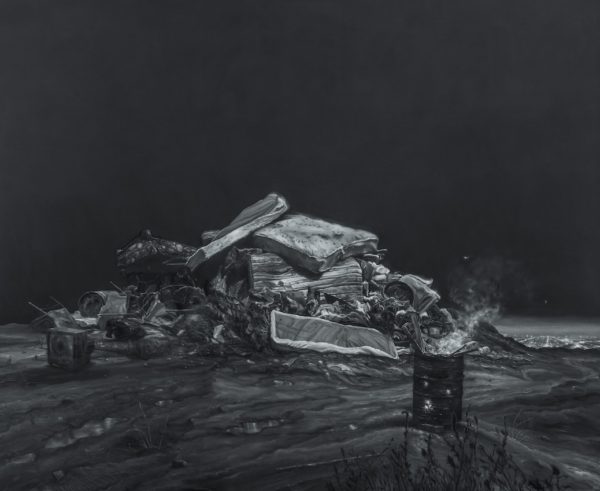 Veronica Roberts, the Blanton’s Curator of Modern and Contemporary Art, spoke to Glasstire about the acquisition:

Vincent Valdez is a virtuosic painter tackling some of the most challenging aspects of American identity and culture. In his City paintings, he helps us to consider the way the painful histories of white supremacism — and prejudice and violence more broadly — persist in the present. His work belongs to a longstanding tradition of artists who confront issues of their time that includes artists such as Francisco Goya, Käthe Kollwitz, Philip Guston, and Kerry James Marshall.

I was fortunate to be able to visit Valdez’s San Antonio studio several times during the making of his City paintings; I’m thrilled that the Blanton can share these significant works with a wider audience where they can help us ask thoughtful questions about where we have been as a country and where we are going.

In a statement to Glasstire, Valdez said about the works:

The City consists of two paintings and the title is key.
The depicted landscape is the strongest compositional component, the foundation that ties the images together.
It is symbolic of contemporary American society.
The viewer defines what this means to them and the institution can play a crucial role in providing accessibility, context, educational programming and support.