by Alejo Benedetti May 18, 2015
FacebookTwitterEmail

Nate Lowman’s show at the Dallas Contemporary begins with a joke: “Q. Why is everyone always saying ‘God Bless America?’ A. Because America sneezes.” It’s the kind of cheesy humor found on a Laffy Taffy wrapper, but it gives the show its name and preps visitors for the rest of his work. Like the name suggests, America Sneezes brings together two themes: America and abjection. 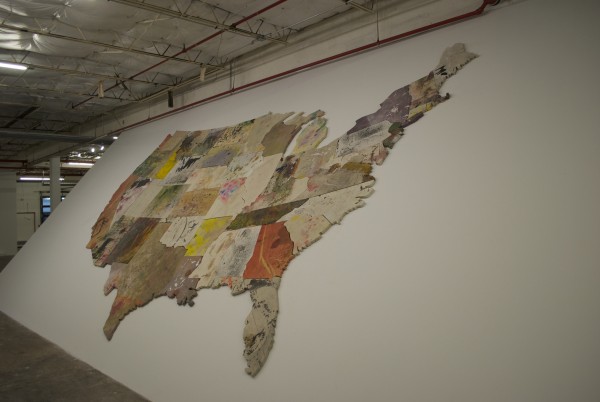 The most ambitious work in this show is a map comprised of shaped canvases of each state arranged in their correct geographic locations. Done using drop cloths from the artist’s studio, this project echoes Lowman’s earlier works, though now on a larger scale. This scene is completed with a rented set of bleachers, positioned across from the map, leaving little doubt that Lowman is embracing an Americana theme with this show. 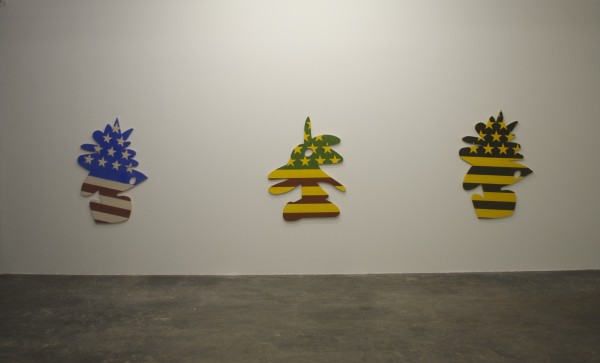 On an adjacent wall are three amorphous-shaped canvases painted with sections of the American flag. This series of work refers back to Lowman’s pine tree air-freshener paintings, but these are less recognizable as the kitschy gas station purchases they reference. To fit more squarely into the parameters of this show, Lowman morphed this cluster of paintings into cartoonish “splats” that, when adorned in the stars and stripes, seem to become the American sneeze mentioned in his title. 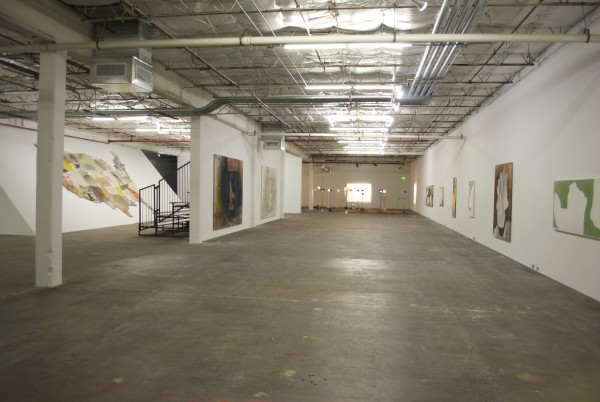 On the other side of the space Lowman hung a series of canvases made up of more drop cloths and leftover scraps from his shaped canvases. Stitched together with dental floss, these Franken-works reinforce Lowman’s commitment to this idea of reclaiming and repurposing his castoff supplies. These pieces are visually related to the map in the first room, but read more like formalist studies without the American undertones of the states canvases. In fact I think most of the decisions Lowman made about the works in the first two spaces were primarily formal. The problem is that when pairing formalism with such identifiable symbols as the United States, the symbol wins every time. What is left is a shaped canvas of Louisiana, not an amorphous, vaguely boot-shaped non-objective abstraction. Therefore (and whatever his intention), because of the strength of those symbols, the title of the show, and the visual connection to the Franken-canvases, it’s hard to see anything in these first two spaces solely in formal terms. 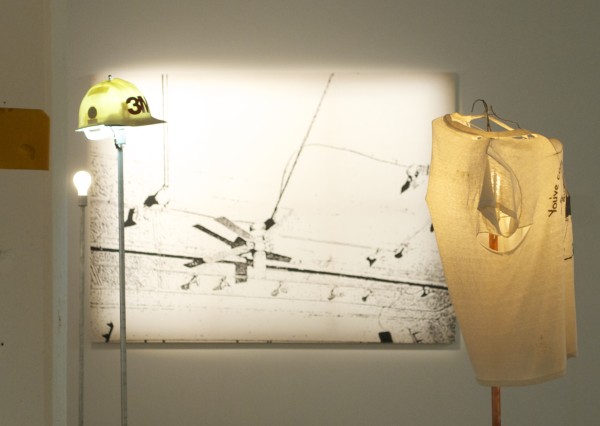 In the rear gallery Lowman included two series: a collection of manipulated lamps and an arrangement of black and white paintings of ceilings. Stylistically the ceilings stay the course of some of his earlier works that also feature sections of rooms rendered in black and white. Unfortunately they don’t make a lot of sense in this rear gallery, failing to engage with the lamps, or really in any part of the show as they lack conceptual and even stylistic similarity with any other works. The explanation offered by the press release says that the ceilings act as the counterpart to the drop cloths representing the floor, but even if they do, what does anyone gain from these two counterpoints? Knowing that a ceiling is the opposite of a floor is hardly revelatory information, and if that’s the only purpose these paintings serve then perhaps Lowman should have saved them for a different show. 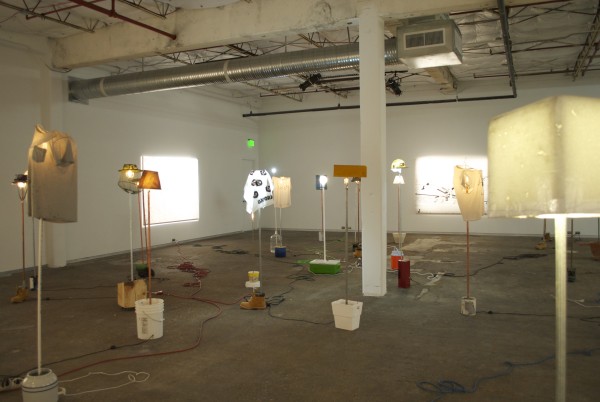 What commands more attention in this back space is the lamp installation. To his credit, these lamps are quirky, kind of fun, and fall somewhere between assemblage art and redneck ingenuity; even why they are lights is a bit of a mystery. The thirty or so objects are cobbled together from boots, hats, t-shirts, coolers, and various other castoff materials. In a way this installation fits into this broader scope of Lowman’s show, as he’s using the refuse of American life. This work is less overt than the map, but in this context can be understood as working towards similar goals. That said, they are really just visual puns and humorous creations, which are fairly superficial. While some will view these cheesy jokes as Lowman’s downfall, the other way to look at this installation is that it brings his work full circle: beginning with a joke and ending with one.

Basically for me the show comes back to those bleachers. Almost everything seen from that type of seating has something in common; it’s entertainment that doesn’t require much thought. I’m not saying Lowman’s show is mindless, but in a way it is bleacher-fodder, in that it’s not very conceptually substantial. The formal studies are overshadowed by the symbols making most of the works quick reads, and Lowman’s one-liners are worth a chuckle, but usually don’t extend far beyond that. The result is a show that has moments that work individually, but ultimately seems a little hollow as an overall package.

I thought the lamp installation was interesting. The rest of the exhibit, not so much.

It’s difficult for me to take this review seriously. The accompanying images are such poor quality. I appreciate the writing but having quality images is a must!