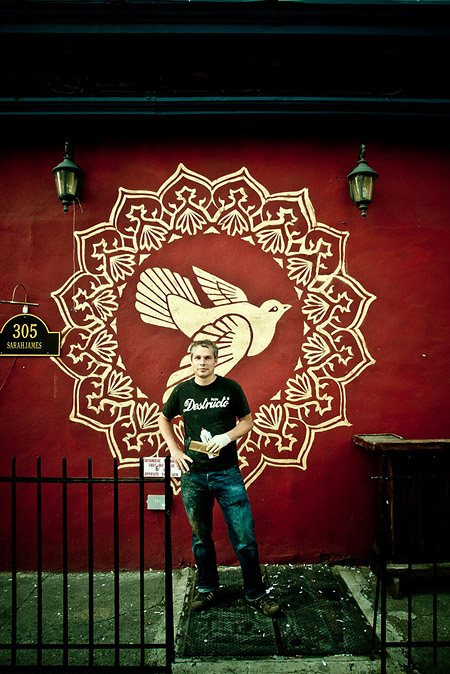 February 2, 2012.
By 6:30 pm, the line waiting for the Shepard Fairey talk was already a block long. Thankfully, my RVSP and press status allowed me instant entry. After securing a seat, I went in search of a beer—finding instead another long line of people waiting for Fairey to sign their books. I spoke to a couple of guys who had been waiting for 45 minutes. Apparently the book-signing line slowed considerably when people asked Fairey to sign skateboards, posters and various body parts.

At 7:30 pm, the 7:00 lecture began. To his credit, Fairey ensured that everyone who stood in line had his/her book signed. A diverse crowd of all ages packed the room. When a baby started crying, Fairey quipped, “It only gets worse from here on out, kiddo.”

Pedro Alonzo, Adjunct Curator of ICA Boston asked Fairey about his start with street art. Fairey who surprisingly is very forthright seemed genuinely happy to be there answering questions. He spoke briefly about his undergrad days at RISD and how at the age of 23, he expected to have a thriving business like Warhol. When that didn’t pan out, he became a graphic designer.

Fairey then spoke about the Andre the Giant sticker campaign. Alonzo asked him if there was any fall-out from using Andre’s image. Fairey told a funny story about unknowingly (and illegally) wheat pasting a billboard across from the offices of the wrestling association who owned the rights to Andre’s images. When they contacted him to cease using the image in connection with Andre’s name, Fairey complied. The wrestling association later called him to request usage of the same images, since in focus groups, viewers preferred Fairey’s images to the originals.

Alonzo queried Fairey about the Obama poster and the lawsuit that ensued from using the Associated Press image. Without going into details about the case, Fairey spoke about copyright issues and the usage of known references and symbols as part of an artistic visual language. He stressed the power of the Internet for dissemination. The Obama image went viral, because in addition to the Internet distribution, Fairey produced 300,000 posters and over 1 millions stickers.

In response to Alzonso’s question about the Time Magazine cover of “The Protester”, Fairey discussed his work and support of the Occupy movement. He printed and gave away thousands of free stickers, since Warner Brothers would not authorize his usage of the “V” (logo from the film V for Vendetta).

A few memorable quotes by Fairey—“Art is most powerful, when it is accessible.” When addressing the issue of “selling out”, Fairey bantered, “I practice socially-conscious capitalism.” His advice to young artists—“Stay true to your own style and ideas rather than cater to the art world.”

The last audience question was “What happens to the rebellion when the rebels win?” Smiling, Fairey adroitly replied “Power always corrupts. I’m such a bastard now.” Clearly his fans disagree, as evidenced by the thunderous applause and the shouts of  “I love you Shepard. You’re my hero.”