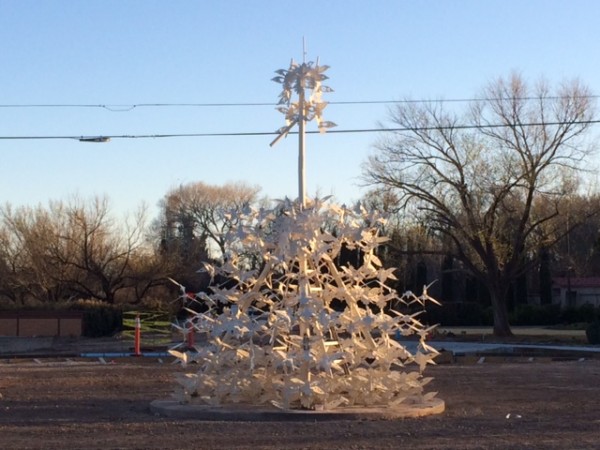 In late 2012, the City of El Paso hired artist Margarita Cabrera to create a metal sculpture for a roundabout in the City and, after extensive delays (due to the reconstruction of the road), Cabrera began installing UPLIFT this past March. Only days later, while out of town, she received a call from her studio manager that the City was cutting up her sculpture and hauling it away. Cabrera checked her email and found the following message from the City’s Public Art Program Manager:

It has come to our attention that your art piece “Uplift” currently being installed at the Country Club roundabout does not conform to the design accepted by the City of El Paso. Your final approved documents (attached) indicate that the metal shavings would be tossed into the concrete foundation but this is not the case you have significantly altered the design by adding actual guns to the work and compromised the structural integrity. You are to cease and desist all work and meet with us first thing Monday morning to discuss this matter. Please let us know as soon as possible at what time you will be at our offices to discuss. Thank you.

According to Cabrera, the sculpture was structurally sound and she provided an expert structural engineer to ease their concerns. Apparently, the City now claims that it was the incorporation of the gun elements that was not approved, though Cabrera says the City was well aware of the fact that the sculpture included components from guns that had been confiscated by the Sheriff’s Department.

“Under the circumstances,” says Cabrera, “it has been suggested to me that what is truly at work here is a form of censorship.”

Cabrera adds: “the City’s failure, to date, to deal with this in an open and reasonable way has compelled me to speak, including through having to seek legal representation.” Her attorney sent an “Application for Remedy Prerequisite to Suit Against the City” to the El Paso Mayor and City Council demanding $500,000 in damages to her artwork and reputation.

We have started a petition on change.org in support of Margarita Cabrera. Link to change.org petition: https://www.change.org/p/city-of-el-paso-mayor-and-council-tell-us-why-uplift-was-removed

Dear Art Community,
In response to numerous inquiries, I would like it to be known that I greatly appreciate all the interest and support that has been shown as news about the removal of the UPLIFT sculpture has been widely shared. Representatives of the City of El Paso have now placed the issue on todays City Council agenda and they have also agreed to meet with us this week, on Wednesday, May 6. We are confident that the sculpture was installed with City approval, and hope to have a full and open discussion leading to a speedy resolution of the situation. Our goal is simple: to have the UPLIFT sculpture re-installed to honor the past, present and future of the community it represents.

Below you will find a link to the most recent letter sent to the City by my attorney, which shows their approval of the fragmented guns on the UPLIFT sculpture.

the city (us) paid god knows how many thousands of dollars for that atrocity alongside the freeway (the infamous, ugly “eggbeaters” and associated crap).

now they destroy a work of art by a local artist.

question: who runs this abonimable department of censorship?