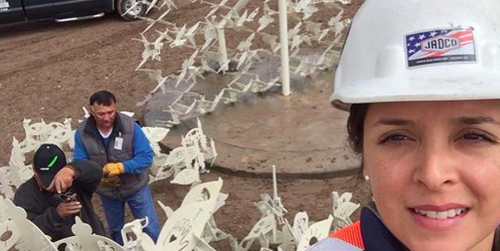 A twenty-foot sculpture, entitled Uplift, commissioned by the city for a new roundabout in a West El Paso reconstruction project, has been removed before the completion of its installation. City officials told The El Paso Times that it was because “it was not built as planned.”

Created by artist Margarita Cabrera, with the help of Mexican children who have survived the violence in Juárez, the sculpture was meant to represent a flock of 600 birds taking flight to promote peace and unity on both sides of the border.

A local resident told KVIA News that he saw the sculpture being installed, but that it left as quickly as it came. Both The El Paso Times and KVIA News report that they received no comment from the artist and that public officials were vague about the “inconsistencies” found in the project. “We just want to ensure quality work and something that’s gonna stand the test of time,” El Paso Quality of Life Managing Director Bryan Crowe said. “We had some concerns with the fabrication so we’re gonna be taking those up with the artist.”

Below is a video of Cabrera explaining the original project:

“Inconstancies”? What on earth does that mean? Get it together City of El Paso! It looks amazing! What an utter waste of time, money and talent. To The El Paso Times writer and editor – please stop using “gonna” in your articles. Please. You should know better.