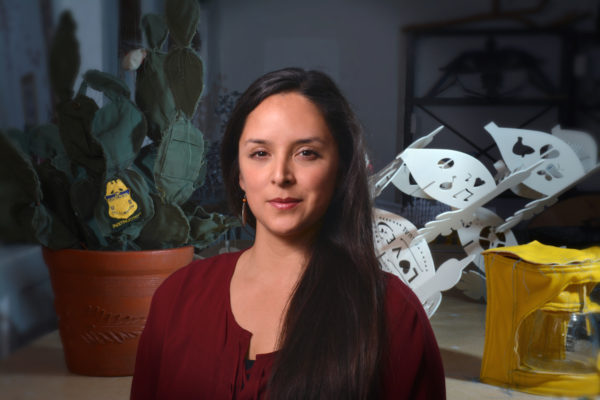 For more than a decade, El Paso-based artist Margarita Cabrera has dedicated her art making to venerating the lives of Mexican immigrants, paying careful attention to the contributions of the women who make consumer goods that are sold in the United States. Over the years, what began as Cabrera’s studio practice has evolved into a form of community based activism through which immigrants participate in creating the artwork that celebrates their lives and documents their struggles.

An immigrant herself, Cabrera grew up in Mexico City and moved with her family to the United States when she was ten years old. Cabrera went on to study at the Maryland Institute College of Art and then earned BFA and MFA degrees from Hunter College of the City University of New York. She has been actively exhibiting since the late 1990s and is currently participating in Perennial Boundaries, a group exhibition at San Antonio’s Ruiz-Healy Art. 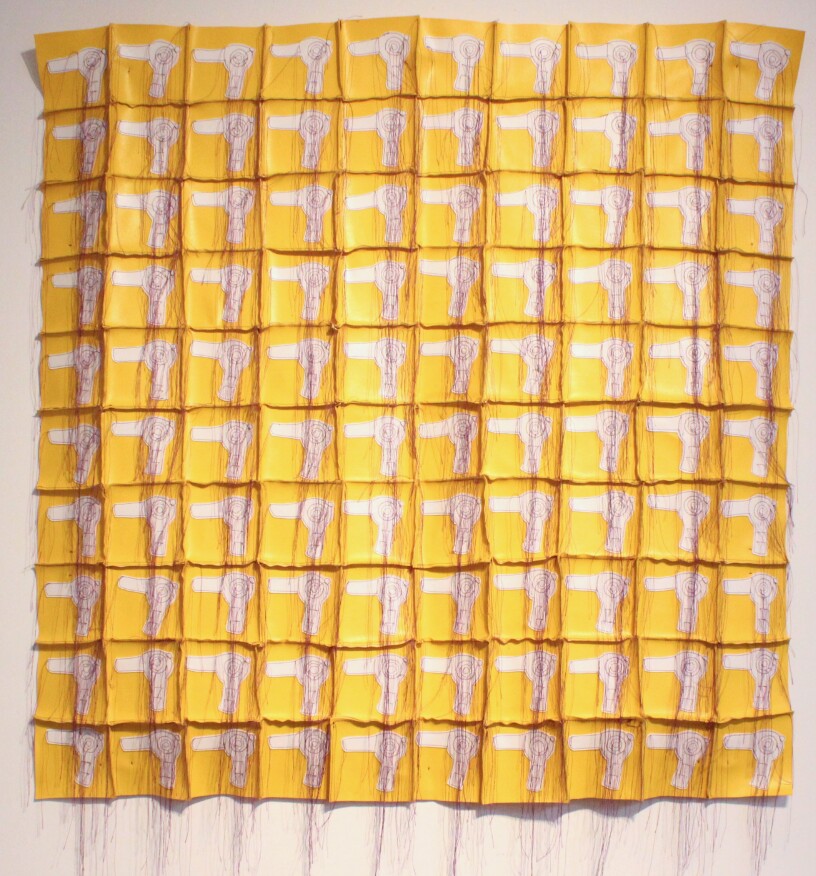 Since beginning her practice, Cabrera has found inspiration in the maquiladoras, the factories located on the Mexican side of the border that hire mostly women at nominal wages to manufacture appliances that are sold to American consumers. Influenced by iconic Pop imagery such as Andy Warhol’s soup cans, including Warhol’s repeating or gridded emblems of consumerism, Cabrera employed a similar compositional format in a series of hand-made quilts in 2004. In White Blow Dryer Quilt, the blow dryer is replicated from module to module like the soup can, with the repetition here referring to the tedious monotony of a manufacturing assembly line. While the imagery calls up the toil of factory workers, the processes of sewing and stitching used by the artist to create the work, along with deliberately exposed threads, commemorate Mexico’s rich textile tradition. 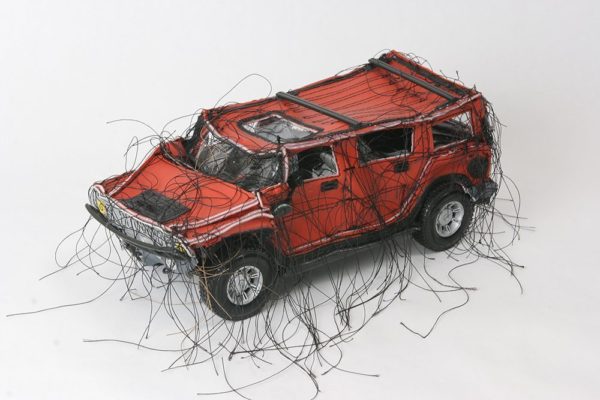 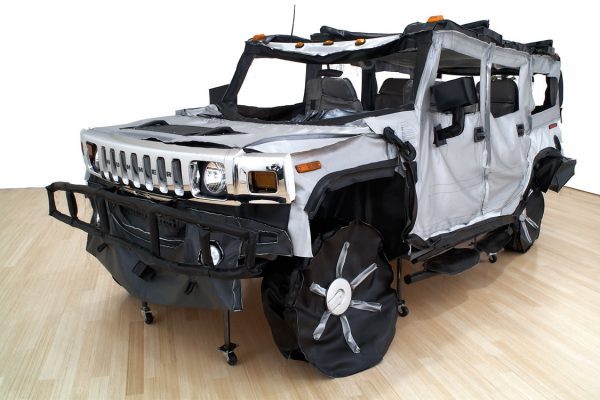 Continuing to work with needle and thread to fabricate her artwork, Cabrera next turned to making small-scale soft sculptures in the tradition of Claes Oldenburg. Mini-Hummer (Red MC-104), from 2005 (which is on view at Ruiz-Healy now), was made by stitching together strips of vinyl fabric. She repeated the process on a larger scale in 2006 for the sculpture Hummer. Because these vehicles are manufactured in the maquiladoras, Cabrera considers it ironic that they are so fluidly exported to the United States, while the Mexican workers who make them face so many barriers to crossing the border. 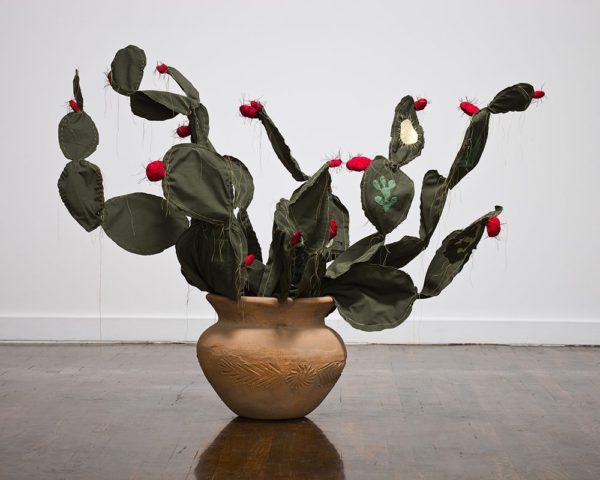 In 2006, Cabrera began work on her series Space In Between, inspired by the writings of Gloria E. Anzaldúa. In her book Borderlands/La Frontera, Anzaldúa coined the term nepantla, which means “being between two spaces.” For Cabrera, nepantla refers to “living in the borderlands or crossroads, and the process of creating alternative spaces in which to live, function, or create.”

Titled Space In Between, Cabrera’s nepantla series represents the landscape of the borderlands through sculptures that take the form of cacti planted in preexisting ceramic pots. The law-enforcement practices of the border regions are embedded in the work’s content through the artist’s chosen material for the cacti, which are made of border patrol uniforms purchased at flea markets and uniform stores; she cuts apart and then sews together the remnants to shape each cactus. 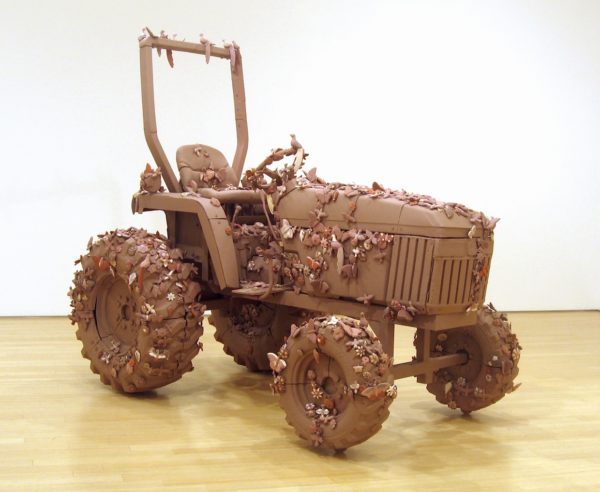 And in using ceramic pots for the Space In Between series, Cabrera introduced yet another of Mexico’s indigenous craft traditions into her repertoire. Take her 2007 sculpture Arbol de Vida, John Deere Model #790: in content, the sculpture calls attention to the fact that ceramics and other traditions are rapidly disappearing as Mexicans are forced to work in the fields to eke out a living, or to immigrate to America in search of something better. Cabrera’s point is conveyed through the visual irony of the contrast between the clay material used to replicate a typical tractor, and the tractor itself—a symbol of an industry that’s replaced traditional creative commerce. The exterior of the tractor is embellished with tiny ceramic birds and butterflies—symbols of flight and freedom—while the title refers to the Biblical tree of life, as the story of Adam and Eve is a frequent subject in traditional Mexican crafts. 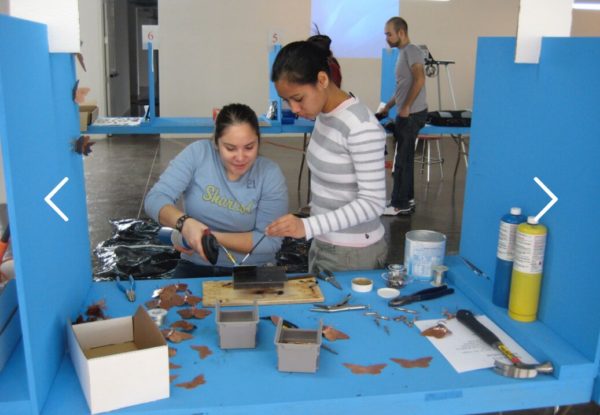 Here and below: The Craft of Resistance, 2008, community project and installation, Artpace and private residence, San Antonio 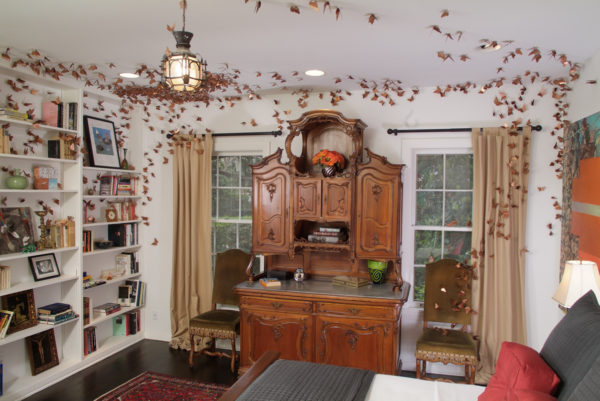 Cabrera’s first community project, The Craft of Resistance, took place at Artpace in San Antonio during her 2008 residency there. Prior to beginning her residency, Cabrera traveled to Santa Clara del Cobre, Michoacán, Mexico, where she researched and learned traditional copper craft-making techniques. Once in San Antonio, she turned the installation space into a mock maquiladora and then invited volunteers from the Latino community to participate in the making of 2,500 copper Monarch butterflies.

The completed project included two installations. At Artpace, visitors saw 12 workspaces with information about the processes, copper butterflies arranged neatly in rows, and photographs of the second installation, which was the interior of a guest house at the home of a prominent Mexican-American collector, where Cabrera had installed elaborate clusters of copper butterflies as if in flight. For Cabrera, the Monarch butterflies symbolize the perseverance and survival of immigrants, in that both undergo forms of metamorphosis through the process of migration.

Cabrera has continued to organize community workshops, with notable examples occurring in Houston and Fresno, California. In collaboration with Houston’s Box 13 in 2010, the artist expanded her Space in Between series by turning a former Singer Sewing Machine showroom into a sewing and embroidery workshop where Spanish-speaking immigrants participated in making desert plants from border patrol uniforms. The following year, she was invited to California State University, Fresno, where she engaged groups of volunteers, many of them immigrants from Oaxaca, in creating three circular cotton tapestries using traditional Oaxacan loom techniques. The choice of cotton was significant; Fresno has a history of cotton farming. While working together in groups, participants told their personal immigration stories as they selected colors, patterns, and imagery relating to the themes of gateways, violence, and water. 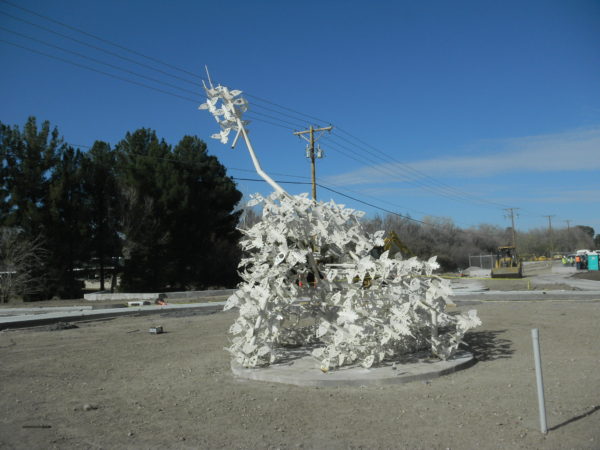 More recently, Cabrera invited volunteers from Juarez and El Paso to participate in the making of a major public sculpture. Commissioned by the city of El Paso, Uplift  is comprised of hundreds of birds in flight, with each bird made of perforated metal that replicates Mexico’s traditional papel-picado, or perforated paper technique. The perforated patterns were designed by workshop participants and then transferred to the cut-metal wings of each bird, along with welded fragments of guns that were confiscated and donated by a local sheriff. Taken together, these images symbolize an emancipation from the violence that permeates the borderlands.

While the project got off to a successful start in 2013, it ran into trouble in 2015 as the installation was underway. Responding to some local citizens who objected to the gun fragments in the sculpture, the city manager ordered the work’s removal without consulting the Cabrera, and did so while she was traveling. When Cabrera was finally allowed to see her work—three months later—she found it in shambles. What followed was a heated controversy, but city officials eventually agreed to re-fabricate the sculpture with the design intact and install it in an alternate location. To date, the process has been slow, and negotiations continue. 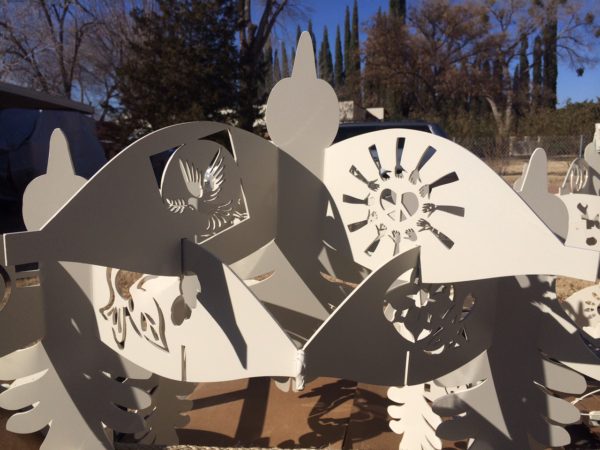 At present, Cabrera is working on another Tree of Life project, and has recently conducted a fourth Space in Between workshop at the Desert Botanical Garden in Phoenix. With thirty community participants, the workshop has resulted in thirty new cactus sculptures.

I represent a nonprofit called The Wall of Flowers. We are attempting to gather 12,000 artistic pieces of resistance to Trumps racist and inhuman border wall. Please check out our site–wallofflowers.org. We would love to feature some of your artwork! Visit the site, plant a bloom, and if you like the project–scatter some seeds to the wind and let others know about the project.
Thanks for listening,