Hills Snyder Steps Down: Anjali Gupta to be New Director of Sala Diaz in January 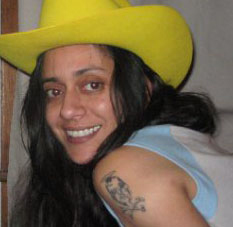 As of January 1, 2015, Anjali Gupta will be the new Director of San Antonio art space Sala Diaz, taking over from Hills Snyder, who has held the position since 1997. Gupta has been Director of the Sala Diaz residency program Casa Chuck since 2013, served as executive director and editor-in-chief of Art Lies until 2010, and is a contributor to Glasstire.

The changeover has been a long time in the planning. According to Snyder, “in 2005, when Sala Diaz turned ten, we celebrated the anniversary with a show by Leigh Anne Lester. It was a good night and it signaled to me that down the road someone would have to replace me. In 2010 I knew who that someone might be and in 2012 asked Anjali Gupta and she accepted. We announced this locally at a fundraiser in June 2013.”

Snyder added, “the mantra for my job as curator of the gallery has been Casualness, Serendipity and Stealth, meaning easy does it, be ready for happy accidents and let it happen without a letterhead as much as possible. In other words, the intent was to avoid becoming an institution. Never let the outlines harden. Stick with a single bulb in each room for ambient light. Anjali will have her own touch regarding the way things happen.”

“It has been a good time,” said Snyder, “but now I’m moving on. This isn’t one of those “leaving to pursue other interests” things — my interests are the same. It’s just time.”

Bill — nobody “stepped down” — it was a handoff. As I made clear in the message which you otherwise were mostly faithful to, Sala Diaz is not institutional in nature and we don’t use corporate language for any reason. Nevertheless, I appreciate your getting the word out.

Glad to see you upfeed the idea and get it above board. The use of the term “stepping down” is actionable when the inherent message is baked into the critical mass of something we can circle back towards extracting the max from.

To bottom-line it: the net-net of your comment is something we’re going to whiteboard with our responsibility curves. The rest is just gravy.

Steps aside? Walks away? Saunters off property, hands in pockets, whistling? Sighs, looks up to the sky, passes the campfire-poker?

Congratulations to everyone. Sala Diaz has been keeping it interesting in the ‘hood for a very long time. I look forward to seeing what’s next.

Worst-kept secret in Texas Art. Saw this coming for awhile, even from the Lubbock tundra. 🙂 Happy for all parties, big fans of Sala Diaz and the SA scene.

Pretty nice close out list of artists. Look forward to the fall of 2016 as well.

Mat Kubo, one t. Casualness of getting names right

Bryan — yes, “Steps aside” is more like it. It’s horizontal. Sala Diaz is a community, not a corporate entity. We avoid the top down thing. But my favorite is “passes the campfire poker.” That will be occurring next time we gather.

Mr. Cutting — my bad on misspelling Mat’s name. It has been fixed.

Actually, Hills Snyder is Ever Ascending.