Here’s an interesting cross-section of San Antonio arts news. Now that I look at it, though, “escena” looks a little too much like “eczema” so I’m gonna call the next roundup something else, like maybe roundup.

Me, I’ve been completely distracted from my usual howdoyoudo due to grant application fever, writing about how there’s art in coffee shops, and that enchiladas exist and soccer stadiums something something etc. for a lifestyle glossy, and helping the amazing Robert “Mantecatron” Gonzales with his incredible video submission for Texas Monthly‘s “Where I’m From” short film contest.

Interesting fact: He based each character on a found photograph.

Meanwhile, though, check it out: 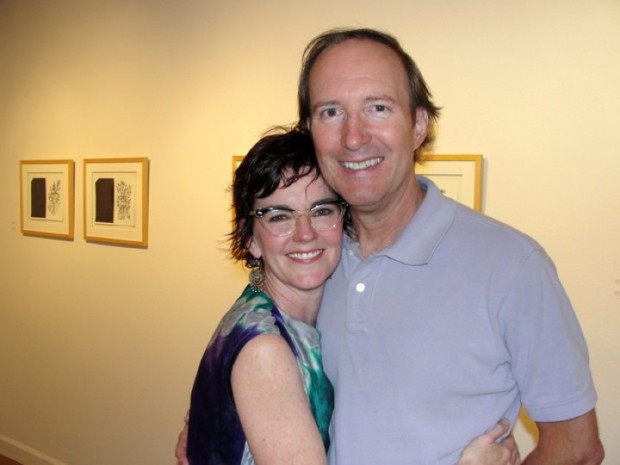 That’s our girl! She won first place and therein netted $50,000. This amount is, quite possibly, the largest ever given to a San Antonio artist for anything ever. *

The Hunting Prize strikes me as an enigma. According to its website (linked above) the 50K is:

sponsored by the international oil services company Hunting PLC, … its $50,000 award is historically the most generous annual award in North America for painting and drawing and has helped to build the reputations, raise the profiles, and support the careers of distinguished artists.

So, oil company, big money, 2-D work. And used to be in England:

The Hunting Art Prize was established in 1981, and emerged as one of the United Kingdom’s leading art competitions before relocating to Houston in 2006.

Despite the British provenance, huge payout, and very fancy yearly awards gala, the Hunting Prize has been regarded by some (and me) as kind of aesthetically questionable. I’ve always known folks to head east to Houston for the gala, and eat a lot of free shrimp and get hammered, but I’m not sure it’s ever been clear to anybody outside the Hunting Prize people who the jurors are. When I told somebody that I was writing this post and including the winner of the 2011 Hunting Prize, (s)he asked me, “is her work any good?” 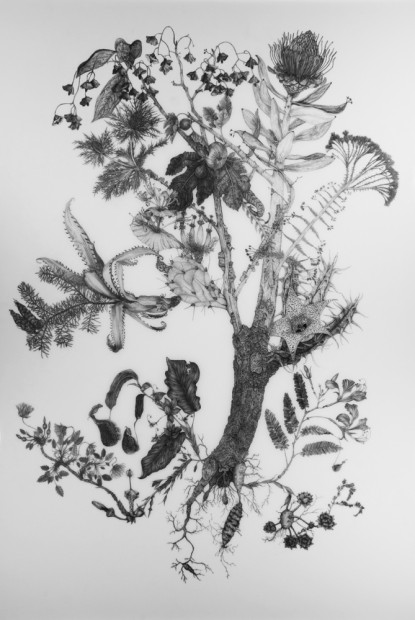 I wish you could see this in larger form; the level of detail is incredible. And while Lester often uses botanical motifs and themes in her work, it’s a subversion of traditional presentation of 17th-19th century botanical diagrams and a subversion of the natural world; monstrous plants, with all sorts of woody mixed with herbaceous splayed with irrational root systems and furred pistils. Plants of the imagination, or, as the title of this drawing suggests, a human interference in the kingdom of vegetation. She had a gorgeous and creepy show at the Southwest School of Art and Craft this past December, wherein she exhibited wild meta-still-life 3D brainchildren cut deftly out of acrylic (go to her site, linked above, to see them — she did some for Luminaria, our one-night arts festival in March, too). She’s the empress of gorgeous tweaked flora, each piece embracing otherworldly loveliness, ominous ruminations, and wicked humor. 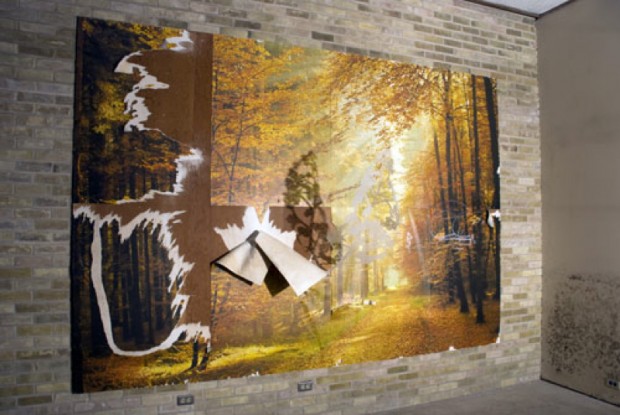 Lester's 2011 Luminaria Installation, "Infiltration," hand-cut drafting film on found wallpaper mural. My crazy uncle had this same wall mural in his law office when I was a kid. Note shadow in center. 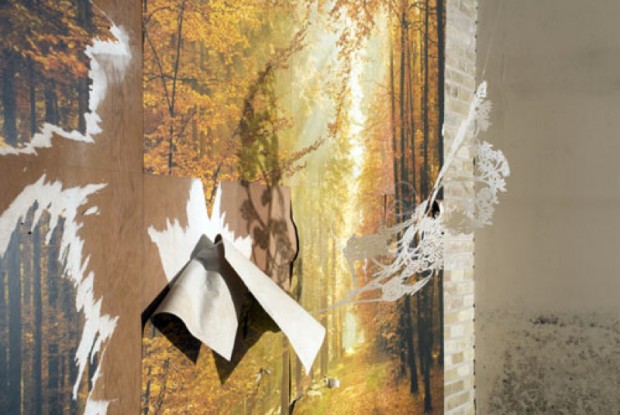 Lester’s originally from Shreveport, Louisiana, where she went to Catholic schools “but was secretly weird the whole time – even by Louisiana standards. I think I’ve always been obsessive.”

Lester moved to SA with her husband in the early ’90s. In short order, she got a BFA from UTSA in 1993, and in 1995 became co-founder, co-owner and co-curator of cactus bra SPACE, an alternative exhibition space for new and emerging artists in the Blue Star Complex, home also to the Blue Star Contemporary Art Center.

Her own art has shown in the Lawndale Arts Center, the Limn Gallery in San Francisco, Women and their Work in Austin, and is held in private collections in Texas and the U.S., London and Brussels. In 2007, she won the San Antonio Artist Foundation Grant

Lester has also managed the weird, small, and mighty San Angel Folk Art Gallery in the same complex, working with owner Hank Lee to sell the work of and help ease the lives of folk and outsider artists from around the world. One of her San Angel artists/friends was the  Reverend Seymour Perkins (1930-2009), a gifted artist and Eastside street minister, who (in-)famously planted a wooden,  handpainted “pregnant hooker’s bench” outside his ramshackle art installation of a house, which the city pushed him out of in 2007 (it’s since been demolished).

As you can imagine, Leigh Anne Lester doesn’t make a ton of dough helping out with an outsider artist nor an emerging-artist venue, and she puts a lot of kindness and wacky spirit into everything she does — except, you could argue, her art, which is exacting as all hell. 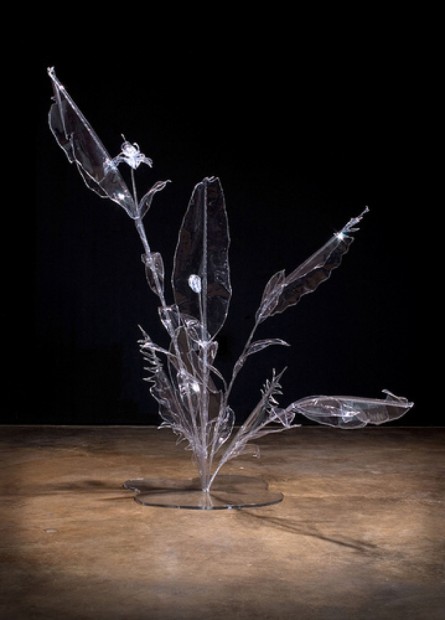 IMPORTANT NOTE: Mutant Spectre, the winning entry, is, to Leigh Anne Lester’s initial surprise, for sale. “I figured [Hunting  PLC, the oil company) just kept the work[s] for their own collection,” she says. “If anybody’s interested, tell em to e-mail me!”

You may be familiar with the work of Cruz Ortiz, 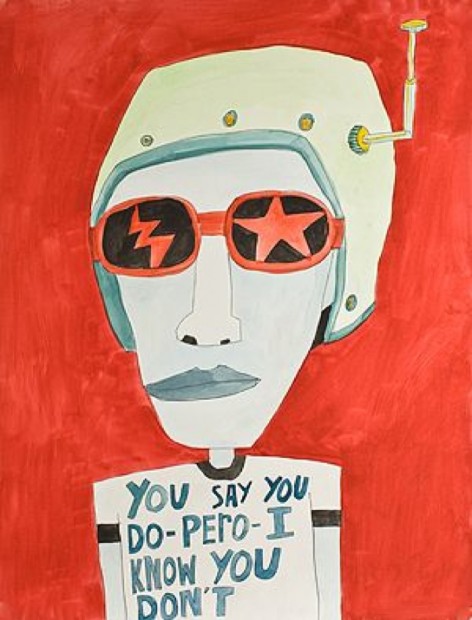 You Say I Know You Pero I Don't 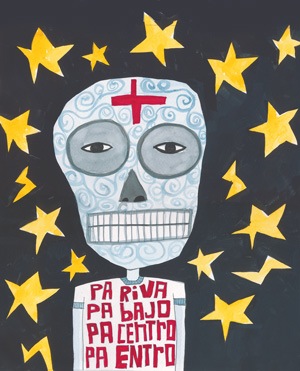 a printmaker turned performance artist (via his Mexican alter-ego, “Spaztek,”), installation maker and, if you’re from San Antonio, the founder of the Dignowity Hill Pushcart Derby, an annual day of pushcart races which raises money and awareness for nonprofit organizations on the struggling/emerging Eastside — Ortiz lives, in fact, just blocks away from Seymour Perkins’ homesite. The Pushcart Derby is a crazy fun event, which now takes place during Contemporary Art Month in March. Some carts are elaborately designed and painted, other vehicles are spare, but pushed by victorious luchadores (as in lucha libre) rumored to be schoolteachers (as of yet, nobody’s suffered the indignity of unmasking). Prizes include artist-designed trophies and bragging rights.

Ortiz has shown all over the damn place, particularly in Los Angeles, Where LACMA curator Rita Gonzalez decided to include him in 2009’s groundbreaking show, Phantom Sightings: Art After the Chicano Movement, which also included heavy hitting Texans like Margarita Cabrera, Adrian Esparza and Jason Villegas.

Here he is at a cold casting call last night, with Kristin Gamez, founding member of the Más Rudas Collective, a confederation of talented young Chicanas who exhibited recently at the Mexic-Arte Museum in Austin. 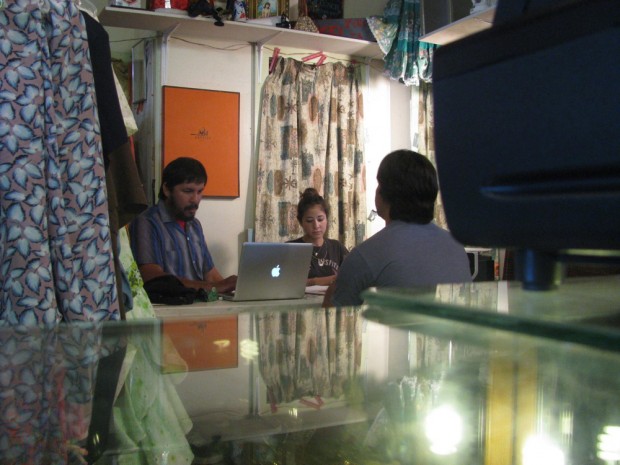 In their casting call, Ortiz and Gamez sought to cast two characters,

Ellie:
… wants to save the world, she was abandoned at a young age and the residue of the past war glitter her eyes with burnt and broken dreams that dance with neon moons.

Randy:
A veteran of war and simply trying to get by in the post war world. Physically and mentally suffers from his war efforts, which have made him half radio (machine). He is kind of hot headed and must subdue himself with medication often.

Hot damn. I sent in a photo and a plea to be allowed to document the shooting. Cruz Ortiz wrote back, among other things: “i think i want to have a press conference… i think i need an ascot.”

So there you have it; Cruz Ortiz, Kristin Gamez, neon moon eyes, medication, and ascot necessity. The San Antonio film world. I will keep you posted.

Jennifer Ward and Vinod Hopson are Houston-based curators, and Exhibitions Coordinator and Press and Website Coordinator, respectively, at FotoFest, a renowned international non-profit photographic arts and education organization whose 2012 biennial exhibition is happening this March.

The intrepid couple visited San Anto this past weekend, and met with gallerists Kimberly Aubuchon and David Shelton, and planned to check out the Second Saturday shows at 1906, Artpace and Blue Star. They visited Jennifer’s grandma (for real!), and were treated to an informal, chatty meet and greet by Artlies editor/curator/phenomenal arts writer Anjali Gupta at artist Guy Hundere‘s studio space in Southtown. Vinod and Jennifer were friendly, curious, and surprisingly knowledgeable about this part of the state, in terms of economics, demographics, and traditions.

In addition to Aubuchon, Shelton, and Gupta, they spoke with writer and Contemporary Art Month board member Ben Judson, artist/Fl!ght Gallery founder Justin Parr (whose photographs they’ve shown),  and me about creating stronger intra-Texas art networks, and arts workers and writers keeping each other on the radar, and whether Texas art is regional (Ward and I, both Texas natives, argued that it is, with caveats – we want more attention for Texas art). It was a terrific gathering with great conversation, and I’m so glad they came. I really, really want to see more discussion among and between artists, writers, curators, and arts nonprofits. They reassured me that the will and outlook are there.

So thanks, Jennifer Ward and Vinod Hopson. Y’all come on back.

OOH! EXTRA ITEM WHILE I’M AT IT!

She’s amazingly prolific. I’m really enjoying this blog, which arose after she wrote a justifiably pissed-off review of 5 Guys Burgers and Fries on Facebook and people loved it. So now she’s a food writer. She even gives a secret recipe for an excellent salad at the Copper Kitchen Cafe at the Southwest School of Art and Craft (where she works) and gives you instructions on how to order it.

Some of my favorite Jung Hee mun aphorisms:

Junghee is frugal and amazed by “eating-out” culture in this country. Somehow she begins busy with work and talk s*i* with her newly habitualized words. The green comes and goes ~ Let’s spend it.

On a huge flat griddle, a cook put about fifteens [hamburger patties] at the same time (good..it’s lunch time and praising the fast past). And the cook started pressing the small poor guys down really really hard. The meat left five inches diameter of protein on the griddle. Well….honey (the protein)….you are supposed not to live like that and not to leave those burnt.

I am ready to bi*ching about what I eat and what I pay. For your information, Junghee doesn’t eat shell-fish except clamp nor barbacoa. no pig ears, tails, feet, noses and cow tongues. However, she likes to try new. She believes everybody have their own rules for their bodily needs and is going to write about hers.

So to recap: Watch I Heart SA by Robert Gonzales, Leigh Ann Lester rocks, think about applying for the Hunting Prize and the FotoFest Biennials, Cruz Ortiz and Kristin Gamez are making a movie, SA appreciates Jennifer Ward and Vinod Hopson for coming to see us, and Jung Hee Mun knows food.

It looks like reigstration is still on. They have a cap of 25k. Right now, they are at about 20500. So still a bit more time. Last year, the sold out in late Feb. I am quessing the same again.