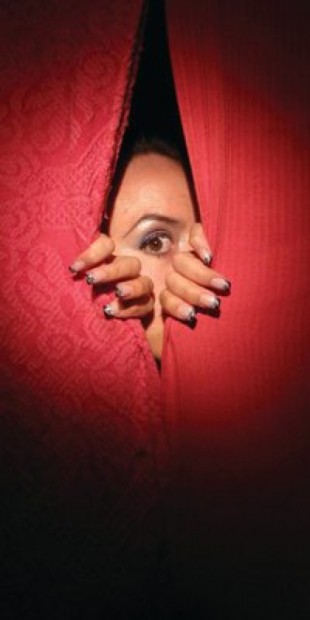 Performance art. Performance art made by an avowed and politically-engaged feminist. A feminist who is a new mom to a 5 month old daughter. Who (the new mom)  went to U. Penn, and completed a residency in Scandinavia last year. Performance art about gender/frontera issues, sex work and South Texas sexual colonialism. With guitar and dialogue accompaniment c/o a  blond mustached art rocker from Minnesota.

The performance will mix dialogue based on interviews and Internet testimonials about Nuevo Laredo’s Boys Town with popular songs whose lyrics complement the text in unexpected ways. [Julia Barbosa] Landois and [Erik] Sanden will transform the [Blue Star Project Space] gallery into a cantina cabaret while confronting the audience with the complications of pleasure-seeking in exotic locales. This is their first collaborative project.

Boys Town, as you may know, is the U.S. term for Nuevo Laredo’s red light district. According to most accounts, Boys Town materialized around Pershing’s American forces during his 1916 punitive operation to vanquish Pancho Villa, though some argue for an older provenance. Here’s an article about it. The article is absorbing if a little on the lyrical-tragic side, which is understandable from a writing standpoint; Boys Town as metaphor for male hormones, injustice, a wildness of borderland, cosmic and ethical etc. etc.

Last year, I watched a Barbosa-Landois short video which foregrounded text taken verbatim from the border brothel experience of (I think) one of her students (she’s an adjunct instructor at the college level). The bald soundless personal narrative came across as less deliberately shocking than infused with the artist’s infectious, conflicted fascination. She went on to interview ten or more men, some of them friends, about their Boys Town encounters, and to examine some sex tourist websites. She took the source material confessions into the Culo text.

Culo de Oro takes place in a Boys Town cantina, where your hosts behave with a Brechtian wink. Barbosa-Landois is absurdly tarted up to the point of near-drag as a grinning hot-señorita whore-madam, and takes on a grimly saucy ringmaster aspect  — think:

(…go look at the Joel Grey 1972 one if you want; couldn’t find embeddable one, and Alan Cumming’s spin is great too.)

At any rate that gives you an idea if not the idea.

Barbosa-Landois is alone with Sanden onstage, and each portrays a number of different characters. Sanden behaves as Barbosa-Landois’ “straight man;” less tarted up, mustache aside, but definitely in-persona as a kind of amanuensis, his dialogue taken from Barbosa-Landois’ script. His über-Anglo whiteness and her Latina brownness present a visual language we all get, and they’re not afraid to riff on that, either, which is both funny and uncomfortable – Sanden’s character refers to the donkey in a bestiality novelty act as white, “like an angel,” not like one of those dirty brown burros.

“Why does the donkey have to be be white?” emcee-Barbosa-Landois counters, near a-snarl.

Their collaboration feels essential, which is some tricky shit to pull off.

For about half an hour, Barbosa-Landois and Sanden kept a beyond-capacity Blue Star Contemporary Art Center Project Room crowd enthralled (and appalled; several people vacated the venue) with unexpected comedy, a moving-target pace, and ironic use of music (parts of the crowd even sang along with them to this chestnut):

Culo de Oro knows that we know something of the vagaries of sex work economics, which is a much-studied social phenomenon; Boys Town offers dangerous jobs for female, male and transgender workers, huge profits for management and even law enforcement, and a generations-old tradition of enclosed semi-outlaw carnality. Got it.

But Barbosa-Landois delivers a trickier (heh) “investigation” – such an overused term in artists’ statements, but accurate in regard to her work, right down to the research level.

The trick narratives Barbosa-Landois has collected and curated, performed live, are some powerful hoodoo, and present us with nowhere near the agitprop they would’ve in lesser hands. Barbosa-Landois unmoors these male utterances from both an expected social context, and from a strictly-punitive gaze. You can feel the artist’s bewildered exasperation with the U.S.-side “johns,” even as she allows them an utterly human-scale and vulnerable voice through Sanden’s performances of the short monologues, and, amazingly, through her own portrayal of these boys, delivered deadpan and uncaricatured.

These stories feature inner turmoil wherein the boys’ desire for sex mingles with dark colonial impulses and ambiguous longing for some physical token of upper-hand masculinity. This nexus of feeling, she seems to be saying, is what we’ve got to contend with; not only the myriad repressions of colonialism as it relates to sex, but the mysterious emotions behind the seemingly emotionless transaction. And that’s scary stuff in about ten different ways, to both genders, both countries, and everything and everyone in-between. It’s the universal undertow in the local terrain that unsettles most.

I’ll never hear Duran Duran’s Rio the same way, by the way. I’m not gonna link to any version here, as it wouldn’t do y’all any good; as is true with any strong piece of live theater, you had to be there.

A visual exhibition of work related to the show remains up at Blue Star until Aug 15. I hope they do a performance again. Find Erik Sanden’s band, Buttercup, here, they’re great as well.

Congrats to Juila and Erik, it was a pleasure to document your performance! Great job on the article Sarah, happy to read your work on Glasstire.

I hope they perform again, too many people missed it!