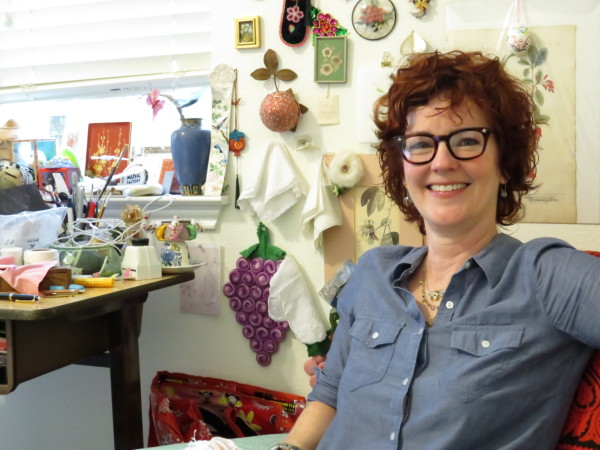 Leigh Anne Lester, based in San Antonio, is known for work that focuses on the changing conditions of humans and the environment. She has most recently created hybrid botanicals that are either drawn by hand on layered sheets of drafting film or are constructed in three dimensions to look like they’re sprawling across a wall or invading a room.

A native of Shreveport, Louisiana, Lester moved to San Antonio in the early 1990s to study painting at UTSA. She earned her BFA in 1993 and became the manager of San Angel Folk Art and, with the artist Jayne Lawrence, co-founded cactus bra Space, one of San Antonio’s longest-running alternative galleries that operated through 2013. Earlier this fall, Lester spent several weeks soaking up the art scene in Berlin, where she was an artist in residence at Blue Star Contemporary Art Museum’s Berlin Residency in partnership with the Künstlerhaus Bethanien.

Lester’s representations of plant life date back to the late 1990s, when she was a resident artist at the Ucross Foundation in Clearmont, Wyoming. At the time, she experimented with small outdoor installations and started thinking about how the natural environment is abused, altered, or overtaken by technology, which she views as the chief instrument in the innately human quest for Utopia. By the early 2000s, Lester was addressing these ideas through a number of site-specific installations of hand-sewn plastic vinyl plants. These replicas of common weeds— the kind often overlooked or considered a nuisance—have an ethereal presence in Lester’s hands. As transparent objects of beauty, viewers can reevaluate the subject’s importance. One of the first of these, titled Century, is a precisely measured transparent replica of Agave, also called the Century plant; Lester was thinking of the Y2K scare and she considered the plant’s lack of functionality as a metaphor for the threatened shutdown of computers.

Around 2001, Lester read about genetic testing to determine predisposition towards disease. Invited that year to participate in a group exhibition for Blue Star (which included an off-site location), Lester investigated this subject. At Blue Star, she painted arbitrarily selected wall areas with emblematic representations of various diseases. Each emblem was rendered as a silhouette of a body organ painted with interior house paint, and the color was selected by matching color chips to medical photographs of the same organ shown damaged by a particular disease. There was no wall text or labels, so viewers had to refer to a takeaway map of the space to identify the organs or visit the show’s satellite venue—an architect’s office just a few blocks away—where they could find framed conceptual “portraits” of the same diseases, with vinyl letters spelling out the name and color of each disease. These pairings implied the toxicity of household paints.

Over the next few years, Lester expanded her visual vocabulary for her disease portraits and began housing them in ornate antique frames. For one group, she focused on the color that she had matched to a disease and contrasted the contemporary tone of each painting’s slick monochromatic surface with the vintage sensibility of its frame. For a second set, she depicted diseased organs as hand-stitched samplers—a move that points to the idea that many diseases, like heirlooms, can be inherited.

Lester is a collector of vintage botanical prints, and they influence her work. In 2003, Lester began her ongoing series of hybrid botanical drawings using transparent drafting film in lieu of opaque paper, and she developed a process of optically blending sections of disparate plant varieties by drawing separate species on individual sheets of drafting film. These are then layered to form cohesive images of mutant botanicals. As the series unfolded, Lester started using unpronounceable titles for the drawings, with each title formed by stringing together each species’ name in Latin and dividing the words into four-letter increments (the repeat number four links to the four sheets of drafting film and the four basic elements found in DNA). These layered drawings possess a quiet poignancy. Their recessed layers are blurred and distant, and they suggest that some plant species are fading away to become memories from an irretrievable past.

Lester’s process is organic and fluid. To make Imitatia Perfecta 3, Lester chose the archaic medium of carbon paper, which in her hands brings connotations of cloning. Presented as a diptych, Imitatia Perfect 3 (Latin for “perfect copy”) consists of the underside of the carbon paper juxtaposed with the drawing that resulted from its use. But the carbon copy is not an exact replica; appendages to the cloned plant are drawn in by hand. And both plants depicted in the diptych are themselves composites of different species, an approach that’s repeated in Mutant Spectre, which combines sections from fifteen different plants, chosen for their properties relating to propagation. These composite plant images are vivid conceptualizations of cross-breeding gone rampant.

Lester’s latest drawings—still rendered by hand—employ computer technology as another device for cloning and mutating. She digitally manipulates sections of earlier works by stretching an image or abstracting it to resemble the cellular structure of DNA. A four-layered composite, in fact, served as the source image for SemplatherviyrusvumTecttubeorumrosus1.3, where a mutant plant rendered on two sheets of drafting film materializes from an amalgam of parts sampled from the earlier work. Here it’s transformed into a morphing gumbo of elements, some of which are depicted in black and white while other parts are abstracted in color as DNA cells. To emphasize the idea of growth and change even further, Lester has added hand-painted color splotches to the surface, viewing them as a “primordial ooze” that coagulates before our eyes.

Lester’s recent efforts have involved growing her mutant botanicals to occupy walls or fill rooms. She continues to work with drafting film, but turns the medium into a delicate latticework by cutting into it with X-Acto blades. In Slowsidle, which was shown in 2010 at the Southwest School of Art, her diverse plant varieties are joined to form a wall-mounted composite that resembles a tapestry shaped like the state of Texas. For Unrestrained Creep, exhibited in 2014 at the Guadalupe Cultural Arts Center, the latticework was superimposed over green organic patterns that bring to mind oozing forms of decay or pollution and the disease-carrying amoebas of the recent oil spill along the Gulf Coast. As in her earlier works dealing with disease, Lester selected colors from a conceptual vantage point; here the particular shades of green derive from web pages of businesses that produce genetically modified foods. 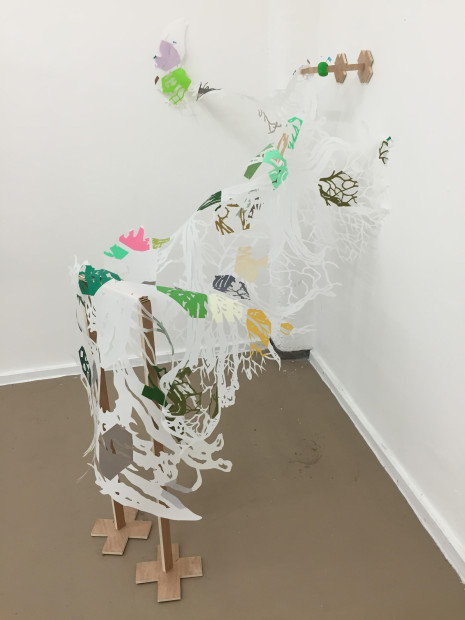 Created in her Berlin studio during her residency, Lester’s newest mutant is her most eccentric work to date. A hand-cut drafting-film sculpture that extends into a room from one of its corners, Flexible Foundation is a three-dimensional caricature of the artist’s recent drawings that unite physical and cellular representations of plants sampled from her earlier composites. Made to look clunky and unstable, the work’s seemingly weak structure is Lester’s well-suited metaphor for the tenuous health of planet Earth.