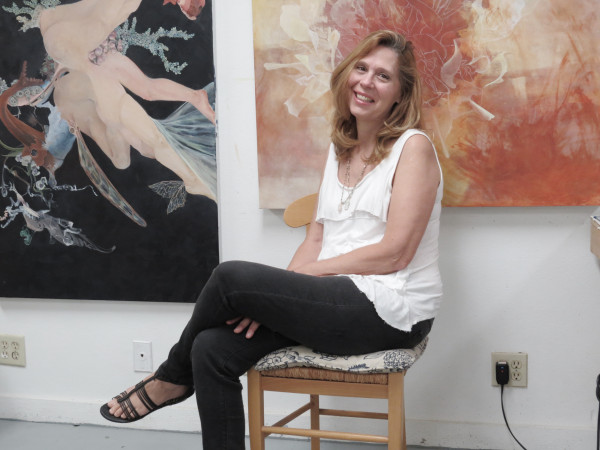 Jayne Lawrence, based in San Antonio, is a multidisciplinary artist who makes drawings, ceramics, and sculpture, and has recently begun making paintings and digital sculptures. Over the past decade, she has devoted her artistic efforts to making works that call attention to the ecological condition of the planet. Initially trained in advertising, Lawrence studied art at the San Antonio Art Institute and went on to earn BFA and MFA degrees from the University of Texas at San Antonio, and finished in 2000; now she’s a senior lecturer there in the Department of Art and Art History.

In addition to teaching and making art, she was co-founder, along with Leigh Anne Lester, of cactus bra SPACE, the city’s longest-running alternative gallery for emerging artists, which operated from 1993 to 2013. Lawrence has had solo exhibitions at San Antonio’s REM gallery, David Shelton’s former San Antonio gallery, and Sala Diaz, and she’ll open a solo show of new work on September 10 at the Southwest School of Art.

Particularly concerned that the natural world is being eroded and consumed by technology, Lawrence collects and studies various forms of insect and plant life as a means of getting to know and understand nature. Whether working with a two-dimensional or three-dimensional medium, the artist often creates composite compositions that have a stylistic affinity with the art of the Surrealists, but rather than depict their dream imagery, Lawrence is more interested in conjuring up ecosystems that conceptualize the mutual interdependencies that exist among the human, insect, and plant worlds.

In 2007, Lawrence noted the changing patterns of shadows cast by eucalyptus flowers that she had placed in a vase, having received them on the anniversary of her mother’s death. Lawrence thought about the temporality of the flowers themselves, and used them as the starting point for a meditative drawing process. The procedure, which she undertook at different times of the day, was to trace some of the flowers’ cast shadows while turning the paper, without letting the imagery become too literal. After filling in some of the shapes with shading, she was left with lyrical organic abstractions that personify the fleeting nature of existence.

From 2007 to 2009, Lawrence created a number of complex composite compositions, working in both drawing and sculpture, with the latter involving the merging of ceramics with found objects. With the idea of investigating what she considers to be symbiotic systems made up of diverse and seemingly incompatible elements, Lawrence began interweaving and conjoining images from three categories: human forms, insects, and plants. According to the artist, humans can be logical or emotional; insects are instinctual, ordered, and signify the “other;” and plants represent nature at large. In joining together these disparate components, Lawrence’s objective has been to study the dynamics of nature-based systems and subsystems, while seeking to imbue each conceptualization with a visual logic as well as poetic or metaphoric content.

For example, in developing her drawing, One a penny, Two a penny, Three a penny, Four. The roses have bloomed and we’re knocking at your door, Lawrence was inspired by a childhood memory of a neighbor’s English rose garden that he kept bug-free by hiring neighborhood children to capture insects and rewarding them for depositing the bugs in cans of insecticide. Metaphorically, the work calls attention to the fact that humans, insects, and plants must continue to coexist peacefully if the planet is to endure, and are often reliant upon one another for our own and the planet’s survival. As a form of visual shorthand, Lawrence’s composite works beautifully remind us that we’re all in this together.

For the 2009 Texas Biennial, Lawrence took her sculptural efforts a step further, creating large-scale composite sculptures that share features in common with the figurative works of Nick Cave and Yinka Shonibare. Exhibited at Austin’s MASS Gallery, Lawrence’s playfully eccentric mutant creatures are gender-ambiguous, in that they wear high-heeled shoes as symbols of feminine sexuality, but also sport phallic protrusions to suggest military prowess. Poised like hunters or soldiers who seem ready to attack, bite, sting, or destroy at any provocation, they could easily be imagined as inhabiting a future civilization where the planet is completely out of balance and every inhabitant must fend for oneself.

Lawrence, in fact, is a fan of science fiction films, and memories of B-movies such as The Fly (1958) or Empire of the Ants (1977) inspired her Appropriated Works series of 2011. Although unaware at the time of a similar undertaking by San Antonio artist James Cobb, Lawrence began drawing or painting images of insects over found prints and reproductions, but used a decidedly different approach than Cobb. In Lawrence’s hands, a sole insect or insect-hybrid is shown as a gigantic menacing inhabitant of an otherwise serene landscape. At once humorous and unsettling, the images tread the fine line between beauty and horror, serving as visually enticing metaphors for many of the real threats to human survival: disease, pollution, the loss of biodiversity. Over the past few years, such ominous insect images have become dominate elements in the artist’s sculpture. 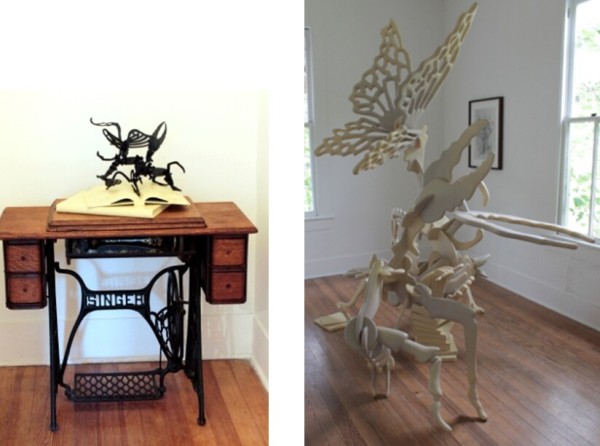 The emergence of a quiet macabre temperament accompanied Lawrence’s shift from her earlier polychromatic sculptural work to more recent monochromatic composites such as Propagator Prototype (2011) and Rosie (2013), which debuted in Infestation, her 2013 solo exhibition at Sala Diaz. In the former work, a black insect hybrid rests atop books with blank pages and an antique sewing table. Taken together, the imagery directs attention to how things change over time, since books are a dying art form and the table is an artifact from the past. In the room-scale Rosie, the stark whiteness of the interwoven hand-cut fragments of human, insect, and frog pond imagery bring to mind skeleton bones, and the idea that a once-functioning ecosystem may have reached the point of extinction.

In Lawrence’s latest efforts, soon to be seen at the Southwest School of Art, infestation has run amuck in a manner that, from an aesthetic perspective, is delightfully energetic and visually dramatic. Using digital technology to produce colonies of black insect hybrids that dance vigorously atop illuminated light tables, Lawrence proves to us that some ideas seem to become sharper and more potent when reduced to black and white. In this case, the luminosity of the physical light serves to animate the black creature clusters, which, as agents of decay, seem to be replicating and spewing their venom at a disturbingly rapid rate.  The same can be said, of course, of the increasing degree of urgency that accompanies every news report about our changing environment and the potential fate of our planet.

I am looking forward to her next exhibit. Her work is diverse, relevant, provocative and showing great skills with adaptation of images and themes. I feel connected to J. Lawrence’s artistic expression. Thanks for a great analysis of her work, David.