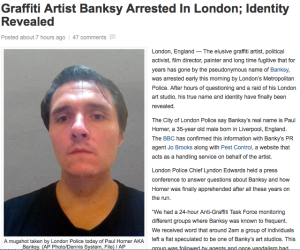 While most people were sleeping last night, the National Report (“America’s #1 Independent News Source”!) released a story with the headline “Graffiti Artist Banksy Arrested In London; Identity Revealed.” The in-depth story recounted the bust made by London’s Anti-Graffiti Task force, beginning with this paragraph:

London, England — The elusive graffiti artist, political activist, film director, painter and long time fugitive that for years has gone by the pseudonymous name of Banksy, was arrested early this morning by London’s Metropolitan Police. After hours of questioning and a raid of his London art studio, his true name and identity have finally been revealed.

Within hours, the story was shared over 200,000 times on Facebook and Twitter and picked up by a number of major online sites, including the Gawker blog Jezebel. The story quotes “London Police Chief Lyndon Edwards” at a press conference “confirmed by the BBC” and includes an “AP” photo of the real Banksy.

This morning, though, several news sites have reported that the whole story was a hoax. Then again, this very story could be a hoax planted by Banksy fans while he sits in jail. But, no—because everything you read on the Internet is true.