by Caroline Koebel May 29, 2013
FacebookTwitterEmail 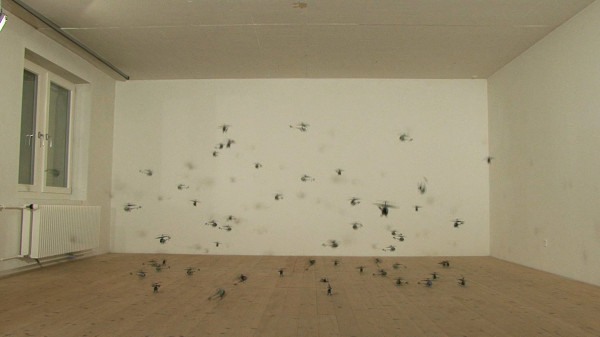 With a combined running time of under six minutes, Roman Signer’s three-video loop at Rice University’s new RG cubicle video space is perfect for anyone seeking exposure to the international art scene during a busy day in central Houston. Visiting a friend in the Museum District, my sudden proximity to this Swiss artist’s works, which I had known only from afar (he exhibits rarely in the US) was serendipitous. I shut the door, hid the key under the flowerpot and engaged the radical (for Houston) act of walking—helicopters overhead on their way to and from the nearby medical center—until I reached the cubicle.

56 Kleine Helikopter (56 Small Helicopters), 2008, is, at 3 minutes 10 seconds, the longest video. A single, wide static shot documents the “action” (Signer’s chosen term for his projects) transpiring at one end of a nondescript white room whose uniformity is disrupted only by a window on one side. Miniature flying machines (toy-sized helicopters) stand on the floor in eight columns. The configuration’s military order is quickly replaced by the ’copters’ chaotic mass ascendence. All hell breaks lose.

At first it seems inevitable that they should collectively take flight (after all, where the camera is, there will be action), but the fact that Signer is nowhere in sight and their take-off is not explained conveys a sense of an automata-led humanity (reminiscent of E.T.A. Hoffmann’s writing at the turn of the 19th century about mechanical inventions parading as people). Even though the viewer can ultimately rationalize that the machines are activated remotely by a human subject (presumably Signer), the initial perception that they exist independent of human will is powerful. Certainly, in our era of escalating lethality of devices powered by hidden agents—think drones, think pressure-cooker bombs—not knowing who is at the control panel creates unease.

It is not long before the little helicopters, a few of which push against the ceiling as if seeking escape, start to lose power and return to the floor. It is gratifying to witness their descent and their individual death throes—some quiet instantaneously, others spasm until eventually stillness reigns. Their demise both repulses and attracts (as in the case of the abject), inducing a fascination with looking at the end of life: in this case the death of the machine. As on a battlefield, death disorders the once uniform; the flying machines come to rest anywhere and everywhere. In 56 Kleine Helikopter, the fifty-six matching parts make a radical transformation from neat columns evoking the calm and rigor of Minimalism to a randomness suggestive of the asymmetry and revelry of Expressionism. 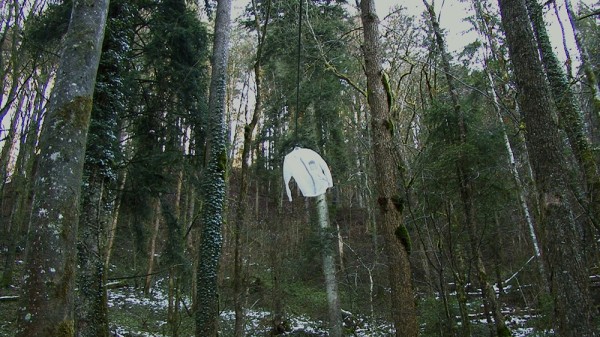 The second of Signer’s videos, Hemd (Shirt), 2009, is staged in a forest. The protagonist is a man’s white dress shirt that first appears as a blur deep among the birch trees and then moves, seemingly on its own, toward the camera, growing ever more recognizable until it becomes clear that a rope-pulley system along which the shirt travels has been jury-rigged through the trees. It proceeds past the camera before collapsing into the snow. Unlike the single-shot 56 Kleine Helikopter, the action of Hemd is edited together, with postproduction playing a key role. Deciphering the identity of the glint of whiteness in the extreme background at the video’s start is engrossing. As the white form is revealed to be a shirt, the image becomes less fascinating. The desire to discover has passed, replaced by Signer’s humor in playing at locating the “Sublime” (i.e., the ineffable beauty of Nature) only to deconstruct it. 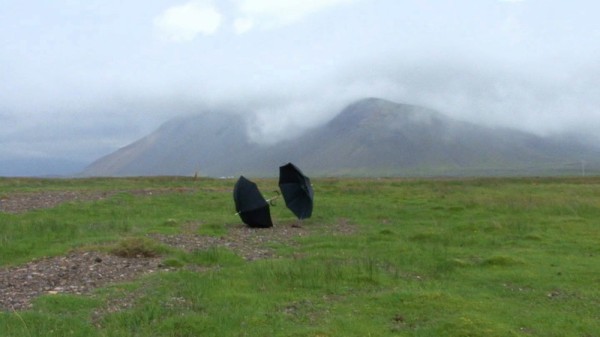 The most enthralling of the  three works is Zwei Schirme (Two Umbrellas, Iceland), 2009, the sole video-action in which “tinkerer” Signer (as he dubs himself) is squarely on-camera. It carries forth a magic-out-of-the-mundane lineage that includes special effects cinema wizard Georges Méliès and Fluxus. In a forlorn landscape of earth and water, Signer (definitively not in the bathtub where apparently he “thinks up most of his ideas”) is seen bracing himself against the wind as he tapes the handles of two black umbrellas together.

The North Face logo is visible on the artist’s jacket, but my irritation at how this “autonomous” act could be co-opted (like any other) by global capitalism is swept away by the now-open umbrella sculpture’s buoyant departure, carried by the wind into the distance, where the viewer can only imagine that the sculpture will continue across the beckoning sea. Signer has captivated me with his vision. The feeling of elation is crushed by the final shot: the bedraggled partner umbrellas come back down to earth, journey aborted. I better watch the three-video cycle again and race out while the art is airborne.