Eric Schnell admits that his delicate, ad hoc constructions have been called “vibe art.” In his show, The Book of Pure Science at Devin Borden Gallery in Houston, a twenty-foot long contraption of balsa wood and masking tape fills the gallery like the sun-dried skeleton of an enormous beached fish (without the smell!). On the walls surrounding it, a cycle of faded drawings on rice paper look like pages from the Tibetan Book of the Dead, found bleached and illegible in the surf. 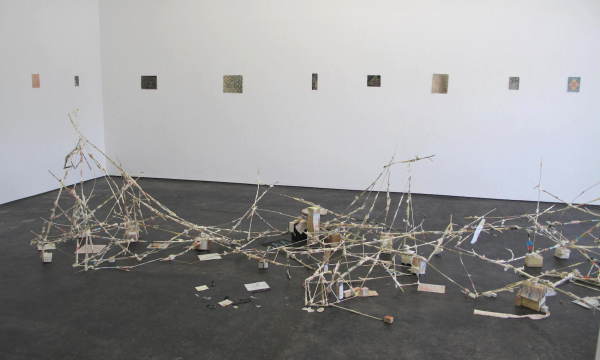 Schnell’s got a right to his beachy vibe; he lives in Galveston, a town destroyed by waves more than once. The wonder here is that he mostly gets away with it: I think what saves the show from Groovy Gulch is its tentativeness. “Vibe art” sounds like an insult, but it accurately captures the amorphous transcendentalism Schnell’s going for. 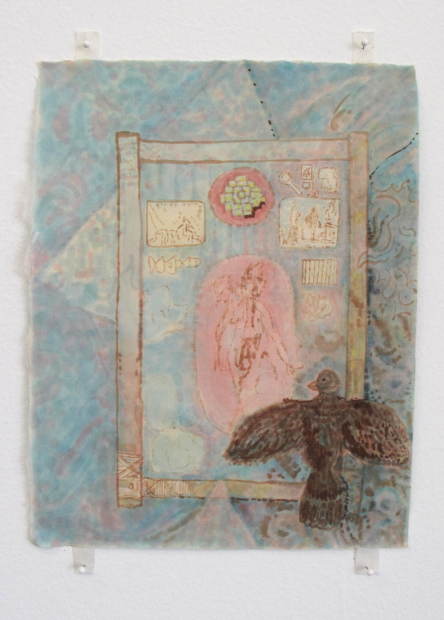 I usually hate fakey manuscript pages, and I don’t like these, but I can tolerate them for the sake of the curious sculptures. Everyone who has seen the Book of Kells yearns for the kind of commitment that such intricate illumination presupposes, and mysterious illegibility is fascinating, but artists who give in to the temptation to re-create ancient manuscripts invariably produce kitschy fakes. They’re everywhere. Here’s a clumsier example by Ron Hartgrove, going on view in Houston next week:

Schnell is guilty of outrageous self-indulgence, but at least he knows it, and takes bulimic steps in mitigation: he firmly disavows his drawings sanctity by cutting them into strips and using them to tape sticks together in his Tinkertoy village! As in a Zen koan, everything’s in play: a drawing might be on the wall, or it might be shredded for use as convenient construction material. Little rocks and blocks propping the piece can be arranged and rearranged. The current configuration is merely the how Schnell left it, permanently incomplete, like a kid’s model train set on the playroom floor. 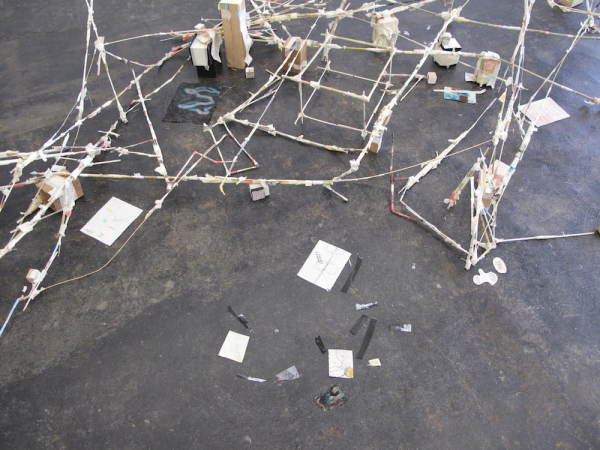 The piece combines complex, haphazard composition with loving, methodical execution. Drawings scattered on the floor are stuck down with tiny hinges, lest they be blown out of place by the wind when the gallery door opens. Every little negligible scrap is set just so, as if Schnell was a latter-day monk, come from his cell on Galveston Island to build a new model of the cosmos in seagrass and blue thread. 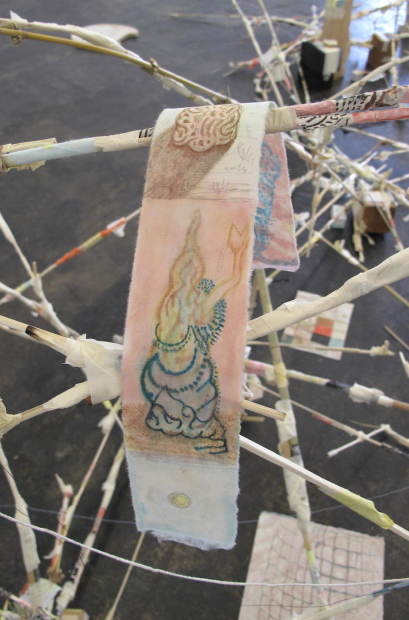 A nymph that can’t transform despite the world’s being such a magical place, 2013, watercolor and paper.

If Schnell grew a longer, more patriarchal beard and developed a more grave and portentous demeanor, he might put it over, as has James Magee in El Paso. The specifics of his work’s interpretation would become far less important than their role as relics of a personal spiritual experience. Even without the beard, it’s already working: I can’t sweep Schnell’s vibe away with a dismissive broom.

Eric Schnell: The Book of Pure Science will on display at Devin Borden Gallery in Houston through October 25, 2014 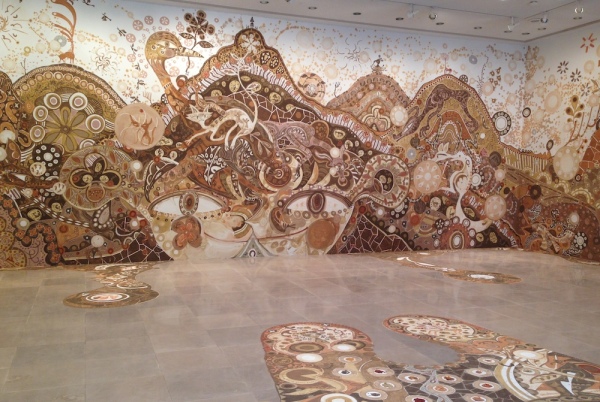 Commissioned in conjunction with the Menil’s exhibition Experiments with Truth: Gandhi and Images of Nonviolence, Japanese artist Yusuke Asai’s mud mural, yamatane, has turned Rice University Art Gallery in Houston into the inside of a giant eco-Easter egg.

Even I feel the uplift. The piece is spirited. It’s lighthearted, it’s fun, and it’s quite beautiful. The limited palette of reds, browns, ochres and gray gives the piece a dignity and a visual unity that a lot of similarly busy murals don’t have. It makes you realize just how badly served graffiti artists are by the high-energy but unsubtle colors that come in spray cans. 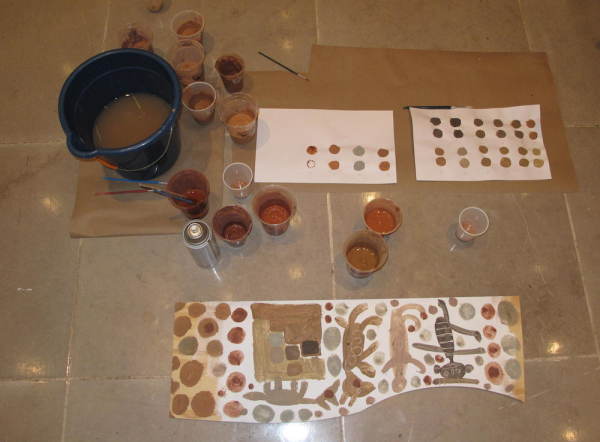 It’s also great that it’s ephemeral, painted with different colored mud gathered from sites across Texas. Smearing mud on the walls is something so simple any toddler could do it, but Asai raises it to a pitch of rarely-seen wondrousness. In his own mud-smeared-on-walls pieces, Richard Long attempts the exact same pantheistic earth ritual with a more sophisticated, less Cartoon-Network approach. 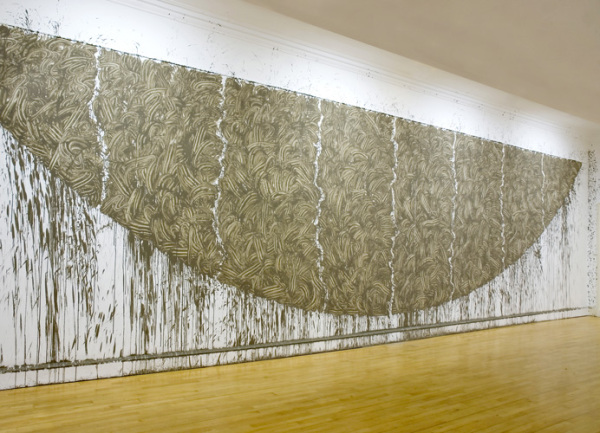 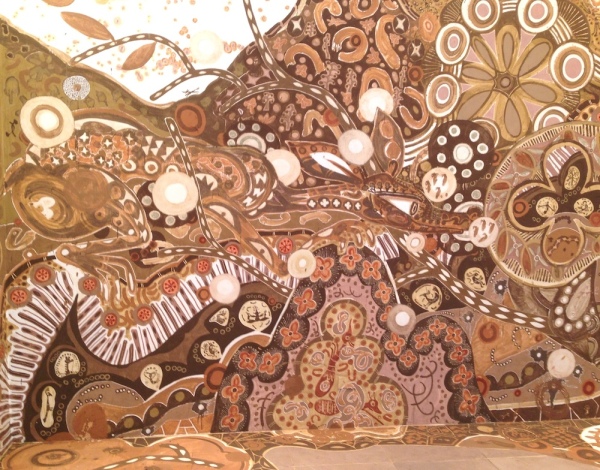 Although it’s hard to be down on something so darn pleasant and uplifting, when you begin to look at the piece in detail, it’s a hodgepodge of images drawn from different cultural traditions: 50% Indonesian batik and Aboriginal Australian bark painting, 15% animal-style decoration from Medieval Europe or Shang Dynasty China, 15% Keith Haring and 20% Rainforest Cafe. It’s generic tribalism, adopted by a new tribe: globalized youth culture. Asai began as a street artist, and the show is the latest in a series of tribalist street artists Rice Gallery has featured: Gaia in 2013, David Ellis in 2006, and Barry McGee in 1999. 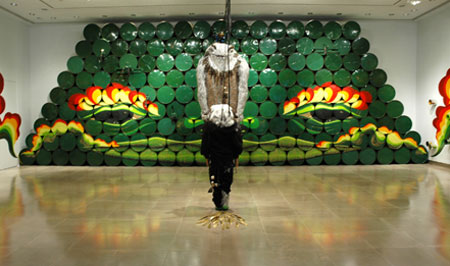 David Ellis’ Conversation at Rice Gallery in 2006 featured the same big god-face mask on the galley’s back wall! 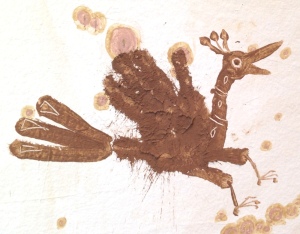 Although the mural is full of inventive characters, they aren’t doing anything: it isn’t a creation myth, or a battle between the gods, or a heroic journey, or a clever allegory. What’s missing from the piece is authentic cultural context. Asai asks us to pretend that his made-up characters have some of the symbolic resonance of the traditional-culture images that inspired them, and they don’t.

It’s a tempting scam: evoking vague folkloric feelings based on the similarities in the animal characters in the tales of many peoples. But a picture of snake isn’t important out of context: it takes on depth when it’s hooked into a mythology: as Vasuki or Satan, the snake becomes important. A fox is just a fox unless it’s Reynard or Kitsune, depending on your continent. Lacking that meaning-bestowing context, it’s just exotic wallpaper. Even Pokémon has its own mythology.

I think that Asai is genuinely reverent, but the mural doesn’t express any particular beliefs about the universe, except that it’s fraught with meaning, which is the basic message of any religion. The piece vigorously affirms that there’s a point to it all, hence it’s appealing optimism, but at the same time it suggests that the point is complex and unintelligible. Maybe that’s the where the world’s at, spiritually, but its no Ramayana.

Yusuke Asai’s installation yamatane is the first event of Rice Gallery’s yearlong Twentieth Anniversary celebration, and will be on view through November 23, 2014 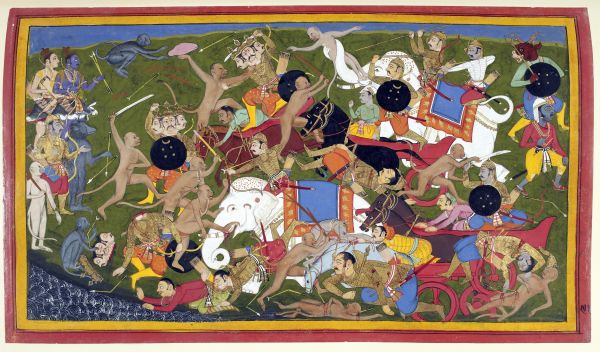