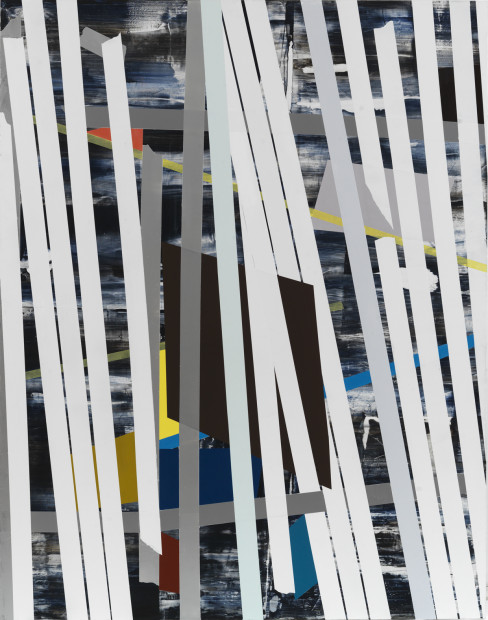 Sigrid Sandström’s abstract paintings on view at Inman Gallery are a dynamic mix of formal play and precision. Meticulously done in smooth layers of acrylic paint on board or panel, Sandström overlaps irregular shapes, thin masking tape lines and controlled swathes of squeegeed, smeared paint. Imagine the push/pull of Hans Hoffman, the mechanical/gestural stroke of Gerhard Richter and the compositions of Russian Suprematism all absorbed by Sandström and made fresh through deft handling and a unique compositional sense. These reference points are simply to help describe the work though, and the paintings do not rely on appropriating past styles or a conceptual framework to guide the viewer along. Instead, I enjoyed them more for their immediate graphic punch and with longer viewing, their formal complexities.

Somewhat contradictorily called Viewfinders, the exhibition is full of paintings with views interrupted by shapes that cut in and out. In the gallery’s entryway is a piece with a series of angled, vertical lines of tape-like marks in white, blue and silver, shielding an atmospheric ground of dark blue and black. Near the center of the painting, a sliver of a brown shape peaks out through the white lines, giving the claustrophobic and chaotic space a slight sense of dimension. A good introduction to what comes next, the painting shows how Sandström uses trompe l’oeil tape marks to bring attention to the constructive process of painting, suggesting a never-ending process of adding and stripping away. Unlike other forms of process-based painting where translucent washes over sketchy lines become palimpsests of previous thoughts, Sandström’s use of white often erases and hides what may have come before it. The narrative of how the painting is made is hinted at yet hidden, and the white lines are a forceful, additive element instead of empty space. 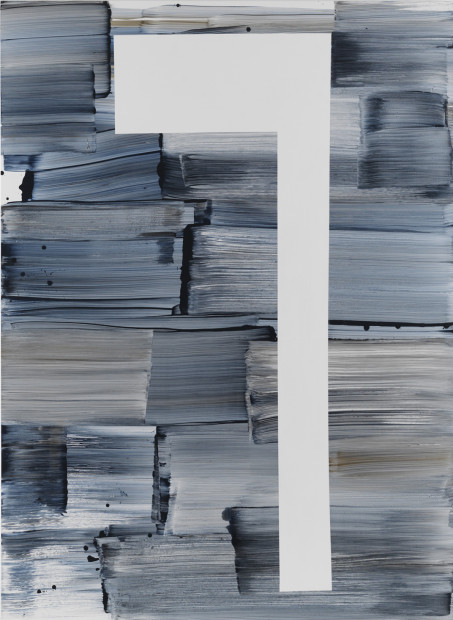 This use of white is evident in the series of large, 7 x 5-foot vertical pieces in the main gallery. One of the deceptively simpler paintings in the show and one of my favorites starts with broad horizontal strokes of translucent blue/brown paint. You can’t really tell whether it’s been brushed or squeegeed across the canvas. The sense of rushing horizontal movement is halted by an upside down L-shaped section of white paint. The bold white shape might look sliced out at first glance, but it is additive and has been painted over Sandström’s strokes. The scale and proportion of the shape is oddly compelling. It is a simple gesture, almost like laying sheets of blank paper over a painting to find a new starting point, and seems more nuanced than some obliterating black “censored” bar.

A nearby piece done in a similar style leans against the wall. In this work, a sketchier wash of burnt orange is done in looser, vertical strokes. A series of cut-out, interconnected white lines intrude, revealing the underlying white of the panel. The subtle difference between these paintings and the resulting effect reveals Sandström’s narrowly focused mark-making and additive/subtractive processes. It is rewarding to see this kind of restraint feel playful and experimental. 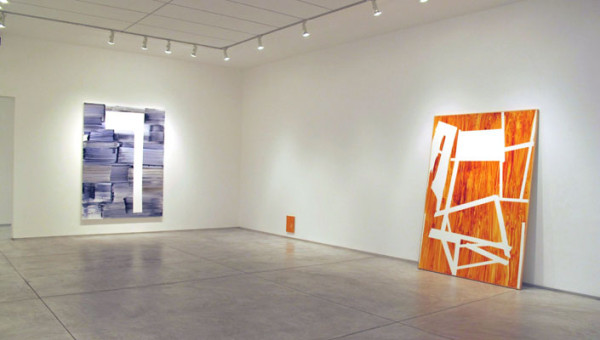 In her gallery talk, Sandström discussed how she has found herself moving from installation to becoming more of a painter. She deals less and less with the surrounding space of the gallery and more and more with the internal spatial relationships of an individual painting. Hints of her installation past were evident though, in the decision to display two paintings on or near the floor in a sculptural gesture. There are also dramatic scale shifts where a drastically smaller painting (12 x 9 inches) is hung low on the wall next to the larger work. 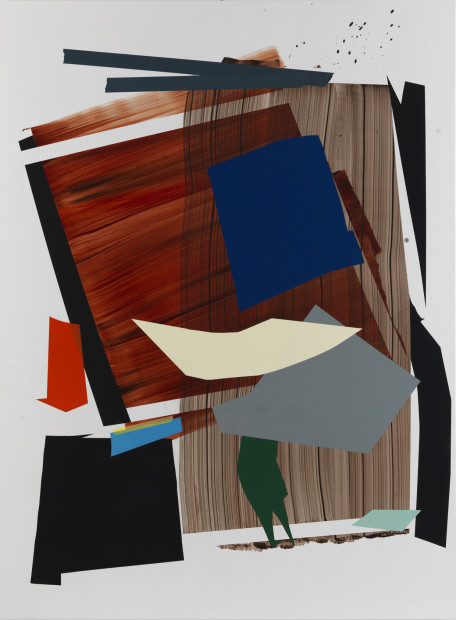 Despite these display decisions and nods to how the paintings might relate to the larger gallery space, the strength of the work rests in the internal dialogues within the paintings themselves. In another large, vertical piece, all of the action is neatly contained within the boundaries of the panel. A series of shapes cascade down toward the bottom of the painting. The movement is implied with slight splatter marks at the top of the painting and shapes hovering, floating and falling like scraps of paper caught in mid-flight. The edges of these shapes often have little jagged slivers or protrusions like the sharp edges you might get when roughly editing images on the computer. Sandström uses elements from past paintings that she photographs and recomposes digitally to re-arrange parts. This links one painting to another as a continuum; each painting is a descendant of another. Sandström still does the majority of the sketching by hand though, cutting and layering sheets of paper to plan works that still change as she paints them. The imperfect shapes and quality of the tape marks gives the extremely composed and precise paintings a breath of spontaneity—as if one momentary relationship between the shapes has been caught, but could quickly change. 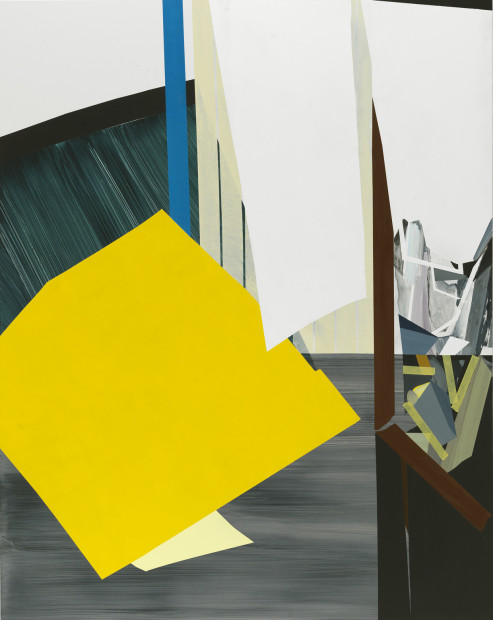 In her gallery talk, Sandström discussed the decision to work vertically as a change from her previous landscape-referencing horizontal work. (The mountainous, snowcapped landscape of Sweden was a frequent reference.) In the Inman show, her more non-objective work appears to be moving toward distilling the spatial qualities of architectural, interior spaces. Her untitled 2012 work pictured above is a good example, evoking a doorway into an abstracted room containing an awkwardly angled and vividly yellow shape. 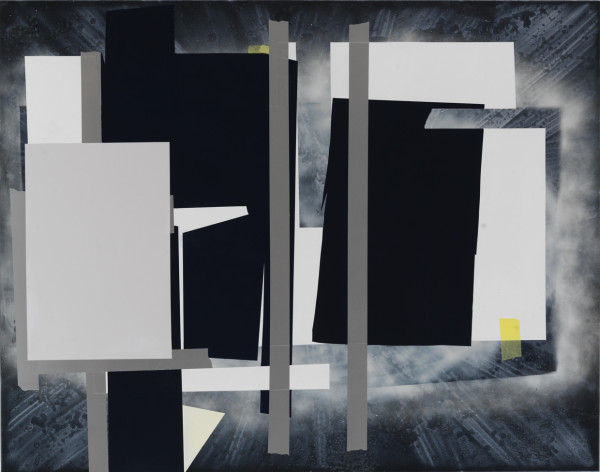 Perhaps my favorite painting in the show is the untitled 2012 work done in a close range of navy blue, sliver, grey and white shapes. They are stacked on top of an ethereal mist of sprayed-on paint with a galactic, deep space quality. There’s a gravitational pull toward the center that is framed by two parallel lines of silver, but the view of the infinite expanse is blocked by vertical rectangles. The play between positive and negative space is difficult to sort out as background and shapes illogically overlap each other. I imagine peeling one away and the whole set of relationships falling apart.

In this recent body of work, Sandström’s tape lines, translucent strokes, rough shapes and occasional splatter marks allude to the guts of painting. But they are rendered with such a high level of finish and virtuosity that they never feel sketchy or haphazard. They are additive and subtractive, but the surfaces remain flat and pristine. There is a delicate balance being struck: The paintings are rigorous without being stuffy, casual without being sloppy and seem skeptical without being cynical. I get the sense that Sandström could invent much more within the formal and technical  parameters of this body of work. Her temporary resolutions do not seem to be end points, rather generative provocations. There is plenty left for her to explore in the visual/tactile world of painting.

Sigrid Sandström, Viewfinders on view at Inman Gallery until February 16, 2013.

Joshua Fischer works as the assistant curator at Rice University Art Gallery, where he’s curated installations by Andrea Dezsö, Ana Serrano and Yasuaki Onishi. He graduated from Trinity University where he double majored in studio art and sociology. He then received an M.A. in American studies from the University of Texas at Austin.

Insightful, provocative and revealing review of a complex, difficult body of work. Thank you.

Thank you, Gary. I appreciate you taking the time to read the article.