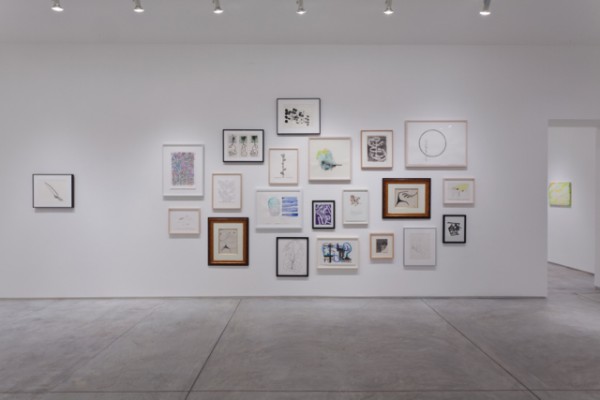 Giorgio Vasari defined drawing as “the animating principle of all creative processes,” and since the Renaissance, drawing has been seen as the foundation of artistic invention, as the most immediate form of artistic expression and as a window into the mind of the working artist. This is often all the more true with drawings by sculptors, where the sheet offers a two-dimensional insight into the artist’s three-dimensional practice. For artists who identify as sculptors, drawing may function as a preparatory practice, as a way to work out logistics, as a project proposal; at the same time drawing may function as a completely divergent exercise, wholly autonomous from an artist’s sculptural praxis.

Inman Gallery lays out an excellent array of these different graphic tactics in the current exhibition Paper Space: Drawings by Sculptors. The centerpiece of the exhibition is a salon-style grouping of sheets of paper, what has become a design cliché is here beautifully installed. Ranging from intellectual exercises to more traditional conceptions of drawing, the time spans from Alexander Calder’s inks of the forties to Katrina Moorhead’s delicate gouache of this year. Identifiable by the titles, the Calder drawings represent two of the artist’s stabiles: Aluminum Leaves, Red Post (1941, private collection, California) and the Museum of Modern Art’s Morning Star (1943). Yet Calder has attenuated his forms, flattening Aluminum Leaves into stark profile and ornamenting Morning Star with additional steel arms and wooden balls.

Over the last half-century, the definition of sculpture has become ever more elastic, to include installation artists like Jessica Stockholder, Sheila Pepe and Phoebe Washburn. All three are represented by studies for specific projects—Stockholder’s may be familiar from her 2004 installation at Rice Gallery. Dario Robleto’s proposal Untitled (Billie) (1998-99) features a detailed watercolor of a mess of buttons and three sets of text underneath, the title of the prospective intervention, a media line and a description of the artist’s actions:

Sometimes Billie is All That Holds Me Together
Buttons crafted from melted vinyl Billie Holiday records, various clothing, acrylic, spray paint
Several new buttons were crafted from Billie Holiday records to replace missing buttons on found, abandoned, or thrift store clothing.
After making the discarded clothing whole again, they were re-donated to the thrift stores or placed back were (sic) originally found.

It is unclear whether the project outlined in Untitled (Billie) was ever realized, but that is beside the point. Here, the sheet merges the certificate of authenticity with both an artist’s working notes as well as the technical specifications of a proposal. 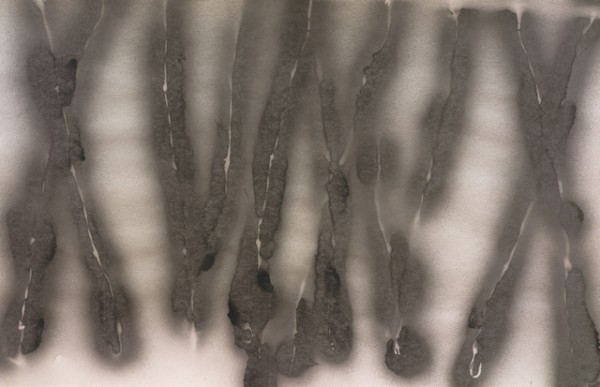 The wall also includes two drawings by Al Taylor, an artist who saw no difference between his two-dimensional and three-dimensional practice. Indeed, Taylor refused to refer to his constructions as sculpture and preferred to see them as “drawings in space.” Taylor upturned the concept of drawing as a preparatory medium as many of his assemblages, built of scrap wood, broomsticks and wire, functioned as models for future drawings.

Fred Sandback also pioneered the concept of drawing in space, with his yarn and elastic cord sculptures that tautly define the architecture of a room; what the artist termed “a drawing that is habitable.” While he typically rendered his plans in a precise fashion, not to mention the detailed requirements he laid out for his installations, Sandback employs an unusual sense of graphic freedom in the study for his 1989 Yale University Art Gallery installation. The sheet features a build-up of freeform pastel lines, representative of his signature string, and loose graphite notations for doors, walls and other architectural markers.

Likewise, Sandback’s minimalist compatriot Dan Flavin is represented by a sheet of gestural marks distinctive from his rigid light sculptures. But we also see the economy of means with which Flavin so famously defined space—on paper, a simple triangle denotes a sail much like the straightforward fluorescent tubes he employed in his light works. In the 1980s, Flavin turned to the sea, and in particular to the form of the sail, in a series of buoyant charcoal and pastel drawings. Unlike his earlier landscapes sketches, Flavin drew his sailboats from memory, incorporating the calligraphic lines of the Japanese woodblock prints he had begun to collect. 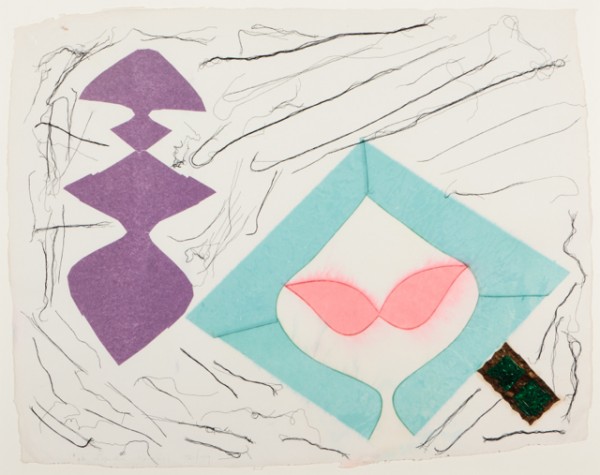 Lynda Benglis’ heavily worked mixed media collage Untitled (#26) (1979) accords with the process-oriented work for which she is best known. Wonderfully irregular, the support itself was handmade. While still wet, Benglis pressed lines of black thread into the pulp, forcing a mark to be constitutive of its support. Further manipulating the work, Benglis inlaid shaped, colored paper, haloed with smudges of pastel, and stapled interwoven metallic paper to the collage.

James Drake presents an interesting riff on the practice of collage with his cut-out drawings, large white sheets of paper from which the artist has excised shapes with an X-Acto knife. In the extraction drawing Artificial Life (2009), Drake revisits his Snakeskin Engine (1994), a Harley-Davidson motorcycle engine covered in python skin. Like the original object, Artificial Life pulsates with a geometric pattern and a play of textures. Drake brings new meaning to Matisse’s description of collage as “drawing with scissors.”

The back viewing room presents some interesting comparisons. It brings together two artists who work in welded steel with two completely divergent drawing practices. Celebrated for his long-running series of welded found industrial objects Lynch Fragments, Melvin Edwards’ steel assemblages are insistently urban in nature. Avenue B Wire Vari #5 (1973) relates to a sequence of open-form sculptures Edwards completed in the early seventies using barbed wire and chain. With spray paint, Edwards has covered the sheet in a diffuse pattern of Xs, creating a close-up abstraction of a Lower East Side chain-link fence. Edwards’ use of spray paint as a graphic implement correlates with the industrial detritus of his sculptural practice, lending both practices a tough, foreboding quality. 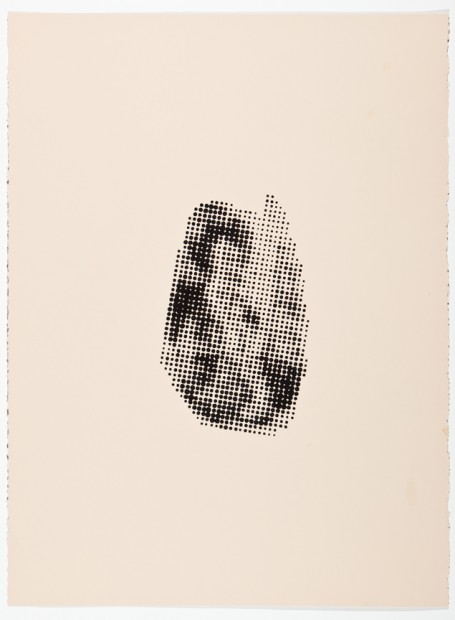 Roxy Paine also welds steel sculptures, transforming industrial pipelines into natural arbor-like forms and addressing the industrialization of the landscape. Like the delicate branches and highly reflective surfaces of his sculptures, Paine’s grisaille Study for Coeden (2006) is graceful and refined. He shows an absolutely sensitive command of the watery ink wash, the overlaps of wash creating points of saturation where boughs grow out of the trunk in contrast to the tree’s pale fingertips, softly climbing along the edge of the sheet.

Two sheets by Carl Suddath set up an interesting conceptual play. In one, Suddath covered the entire surface in a thick layer of rich graphite. Completely blackened, the surface denies the presence of the artist’s hand; negating the notion of drawing as the most immediate and intimate example of the artist’s autographic presence. Suddath flips this conceit on the opposite side of the room with an ink and pencil drawing of an enlarged fingerprint, the forensic nonplus ultra of a personal signature. Furthermore, Suddath has left numerous traces of his process. He began by drawing a precise grid, oriented diagonally, across the sheet, even numbering the lines on the right and lower registers. With exerted force, Suddath scored the sheet so that despite his attempts at erasure, the marks remain in physical form. This handmade pochoir functions as a framework on which Suddath anchored the Benday dots of his fingerprint.

Paper Space presents some familiar favorites alongside some fascinating surprises. It is a beautifully organized exhibition with much to say about how one’s three-dimensional practice is both aided by and completely separate from one’s two-dimensional workings. With the rising size and increasing inventory of installation materials, sculptural practice grows more expensive and time consuming, making the simplicity of drawing all the more alluring. Yet as Paper Space demonstrates, drawing today is anything but simple.

Elliott Zooey Martin is a curator and writer living in Houston.