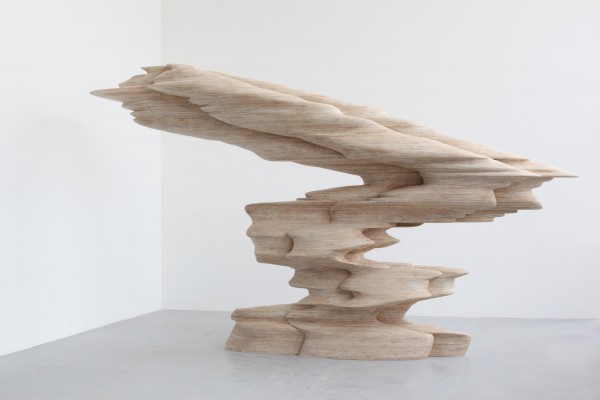 Tony Cragg’s work in Seeing Things at the Nasher reminded me of the iconic Old Man in the Mountain—a perfectly natural, perfectly uncanny male profile formed in a cliff face in the White Mountains of New Hampshire, where I grew up. Tourists came from everywhere to see the Old Man, ogling it in wonderment from a rest stop at the base of the mountain, snapping pictures and briefly marveling at the phenomenon before hunkering down at a nearby picnic table for a lunch of turkey sandwiches and Diet Coke.

Granted, the Old Man’s human likeness, albeit a bit rigid, did give one pause. (The outcropping collapsed on May 3, 2003.) One found oneself lost in a torrent of thoughts about erosion, weather, gravity and, if you’re inclined, divine design, coupled with the odd likelihood of all those forces agreeably combining to create an incredibly monolithic, natural monument to nothing, except to the power of the factors that made it.

Because they’re also often monolithic, Cragg’s sculptures in Seeing Things solicit that same kind of wonder at first. They swarm vertically and horizontally in curving configurations that are at once full of speed, recalling Boccioni’s Unique Forms of Continuity in Space, yet somehow still indicative of the slow layering of time, like sediments fused over eons into rock. Some are brightly-colored bronze, molded into giant objects that look like gears or, as is in the pieces Outspan and McCormack, cheerful, extruded substances or artificial joints. 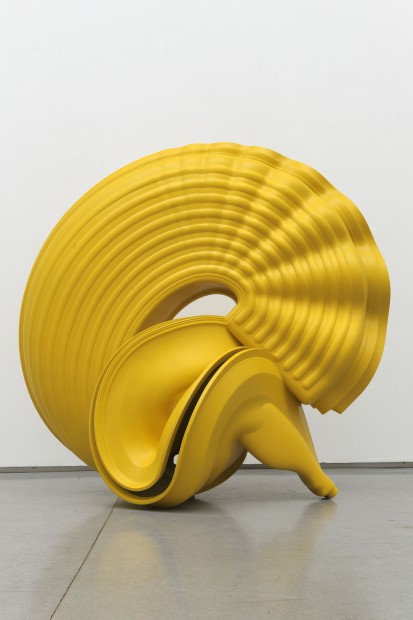 The first time I saw the show, I felt a kind of relief at seeing very formal, masterfully executed sculpture. I took delight in the materials—the woods and bronzes so rooted in art history, yet in Cragg’s hand, seemingly made new. There is a real clarity to the material presence of Cragg’s sculptures that is immediately compelling. You gasp a little at the sight of them.

While the sculptures are indeed formidable, I wasn’t looking hard enough at that initial encounter; or maybe I didn’t want to admit to seeing what is so apparently embedded in a majority of the work. Just like looking for animate resemblances in cold cliff-faces, upon searching the viewer finds any number of contorted human faces and forms in these sculptures. But unlike the gratification one feels at looking at a natural wonder that is made over time without articulated craft, many of Cragg’s forms are compelling only in fits and starts because they are man-made.

The myriad silhouettes and profiles that strenuously push out of wood and metal, as if being birthed from the core of the material itself, subtract a fair amount of awe from witnessing this work. I found myself wishing that I could un-see the faces and return to my first, visceral response to Cragg’s manipulation of material and all its resounding qualities. But once you notice the faces, contorted in all manner of Dantean agony and ecstasy, you start looking for them in all the sculptures’ curves and folds, and the raw power of the sculptures’ stuff is irrevocably dulled. 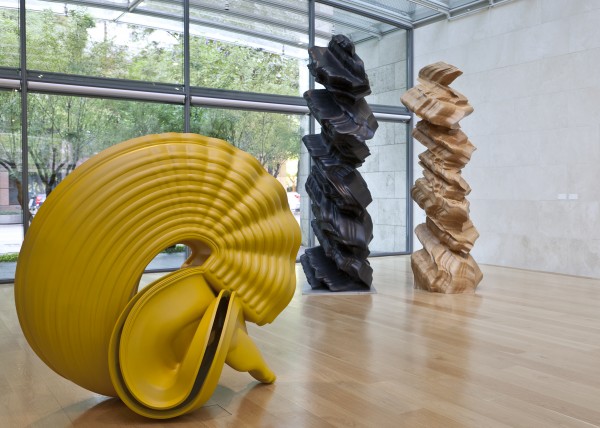 As a self-proclaimed “Materialist,” the figurative elements in the sculptures are a visual clue pointing to Cragg’s notions of the body and spirit as rooted in the material of the world, but they are also a visual stumbling block. “Material,” Cragg said recently in an interview with D Magazine, “is so complicated and sublime that just if we understood more about that, we’d be a long way down the road to understanding our existences.” But by employing this masked kind of figuration—teasing the viewer into looking for something, rather than being with the sculpture—Cragg has done a great deal to keep us from the purest connection to his chosen materials.

In no small part, the dissatisfaction with a lot of Cragg’s forms here has to do with the fact that much of it looks digitally conceived—distorted, dragged-out shapes that look like choppy waves, captured wind or eroded rock hide other forms within them, making visual puzzles that smack of animation software.

The piece Runner (2009) is black bronze and pedestal-mounted, and depicts a zigzag of captured motion. Putty-like, stretched faces expand and contract in all directions, confounding the implied motion of the piece and instead creating a contrived frenzy. This piece, among others, conjures images from the newer versions of Star Wars, where all the grit and muck of George Lucas’s original futuristic genius is polished up into pixilated, hyper-speed, computerized future-fantasy. It’s an aesthetic that feels antiseptic and outdated as soon as it’s made, and one that makes a viewer (of the movies and of Cragg’s sculpture) feel like someone’s trying to sell them something. 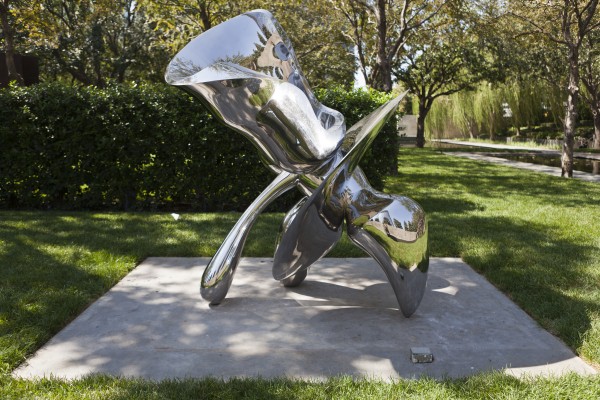 As a corollary, for what it’s worth, Cragg’s work from previous decades—the conical metal towers of Minster (1991) and the gorgeous perforated stone surface of Beasts of Burden (1991), for instance—had all the earthy pulp and fecundity of Lucas’s original Star Wars films from the 70s, and, like the films, spoke a great deal more than this newer work about nature, scientific insertion, power, relationship and all the contingent parts between.

In his essay accompanying the exhibit, Nasher curator Jed Morse says of the digital quality present in Seeing Things: “Although the forms sometimes appear to be computer-generated, Cragg prefers to work by eye, mind, and hand. He has said that the handiwork is important ‘because the slightly imperfect resolution of the forms avoids putting too much emphasis on the recognizable forms.’” But the recognizable forms in these sculptures are not de-emphasized by handiwork, and the overtly digital vocabulary of this current work goes unresolved, highlighting the Escher-like tricks Cragg plays with surface and form without giving them the requisite weight that could move the work into more compelling terrain.

All that being said, some of the work in Seeing Things is very strong, most of it suggesting the figure, or parts of it, without any real articulated depiction. The towering, wooden piece See You is a smooth orchestration of various carved parts that loosely resemble swaying hips or highly abstracted arms, but also geological formations, that all fit together like a Russian doll. But unlike a Russian doll, See You seems to be made from one solid mass and carved from the inside out. It, unlike the pieces with hidden faces, compels a close scrutiny not to find something, but to sate a wonder about the sculpture’s origins at the hands of its maker. It’s a confounding piece that gives no clear answers and leaves one feeling enlarged by its beautiful mystery. 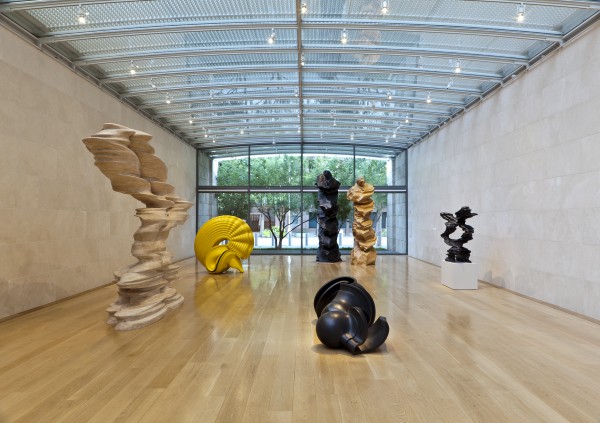 The few large, painted bronze works—the aforementioned Outspan and McCormack, as well as a series called Early Forms—are depictions of laboratory instruments expanded, inflated and twisted into odd, contorted, but somehow affable shapes. Inside the bright, flat-painted surfaces of Outspan and McCormack (yellow and blue, respectively) are the nether reaches of the bronze, where glints of umber metal still glow like smoldering embers. The black mass of Early Forms (St. Gallen) (1997), on the garden terrace of the Nasher, has a bulbous tip that feels both male and female, while a screw-like canyon curves its way around the object, exposing its innards. On the day I saw this piece, it had just rained and water had followed the winding sinews of it—down from the tip, into the canyon and then into a shallow gulley at the far end of the sculpture where the water pooled, waiting to evaporate.

Watching that water purged my distaste at much of the work in Seeing Things. This black sculpture seemed to encapsulate the most essential qualities of Tony Cragg’s work—material meets serendipity and irrevocably alters our perceptions.

[…] Willard Spiegelman, in the Wall Street Journal, and another via FrontRow contributor (and my wife) Lucia Simek, in Glasstire. First, the good doctor Spiegelman, who swoons at the simple beauty of Cragg’s work: Mr. […]

Yes. I think he’s a smart artist, and impressive as hell in many ways, but I had the same experience you did, Lucia.