A month after Winter Street Studios, the 75,000-square-foot building that is part of the Sawyer Yards artist studio complex in Houston, suffered severe damage due to arson, over 100 artists are still dealing with the fallout. Artists have lost equipment, materials, and years of work, including pieces that had already been sold but not delivered and works that were destined for exhibitions.

In a press release from the Houston Arts Alliance (HAA), artist Taylor Blaine stated, “We received an email that there was a fire around 7:45 am on Tuesday [December 22, 2022]. In the next 3 hours, we learned that it was arson. It has been a roller coaster.”

Cary Reeder, who maintained a studio at Winter Street, told Glasstire that she originally assumed the fire was minor and perhaps caused by a space heater or an electrical short. She only realized the severity of the damage after entering the building to retrieve a painting she had sold that morning. She left immediately because she was in shock. 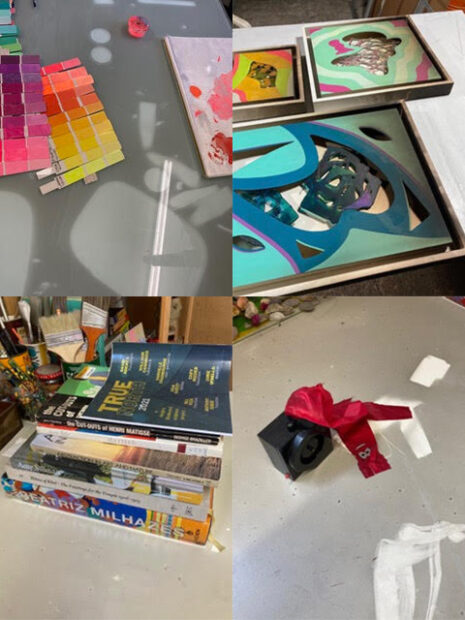 Images of Cary Reeder’s studio after the December fire.

Ms. Reeder, who has a pre-existing lung condition, explained, “I was terrified to go back into the building because I was dealing with/still am dealing with a lung infection that pulmonologist number 3 is still trying to figure out. The landlord offered to have my things moved so I wouldn’t have to go in the building, but my studio is my sanctuary and my artworks are my children, so I declined that offer.” 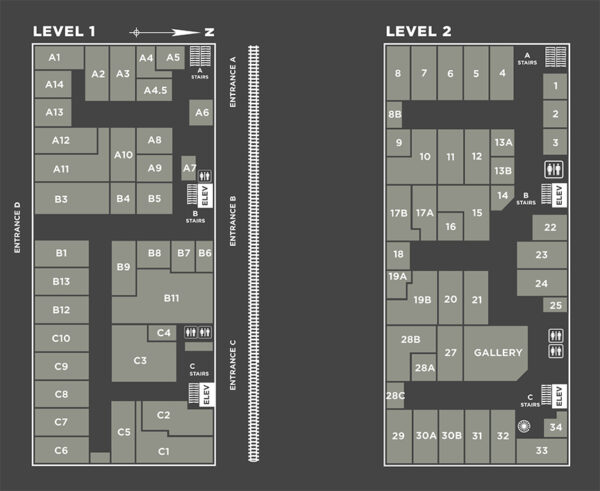 All artists in the 77 studios spaces at Winter Street have been affected. Sections A and B of the building will be cleaned, with the goal of having artists back in these spaces sometime next month. However, section C, which is where the fire originated and comprises 10 ground level studios and approximately 12 spaces on the second floor, sustained structural damage and will take at least six months to repair.

For weeks, artists have been assessing damage to their artwork and personal effects, and have been packing up their studio contents. To advise artists through this process, HAA brought in TX-CERA, a group of volunteer conservators the organization works with. TX-CERA’s members, who have been trained by the National Heritage Responders (a group created by the American Institute of Conservation), visited artists’ studios, assessed damage, and provided guidance on how to clean and remove soot, which is oily and difficult to clean. Since those initial in-person meetings, the conservators have also been available to advise artists 24/7 by phone.

Laura Spector, whose artwork was damaged in the fire, told Glasstire that while the emergency conservators’ insight was extremely helpful, they informed her that it may take one to two years to get her artwork 80% repaired. Ms. Spector is slated to have a solo exhibition in Georgetown this September, and all of her works, which had been completed prior to the fire and were stored in her studio, have such significant damage that they need to be completely repainted. 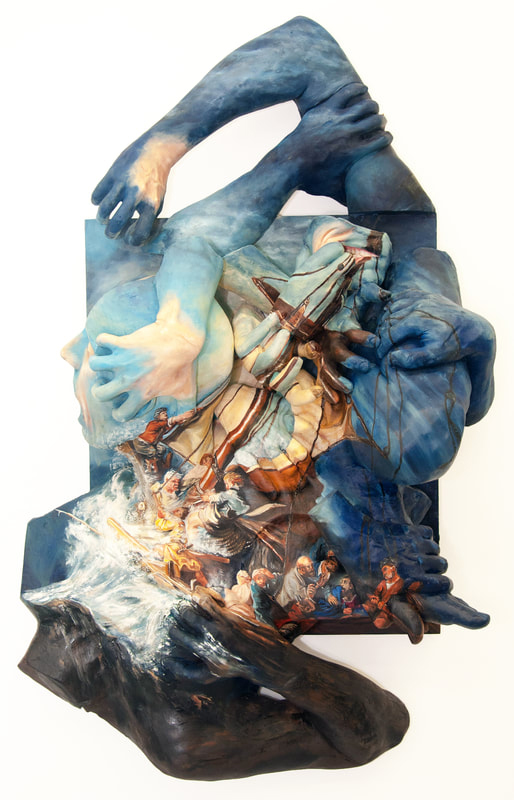 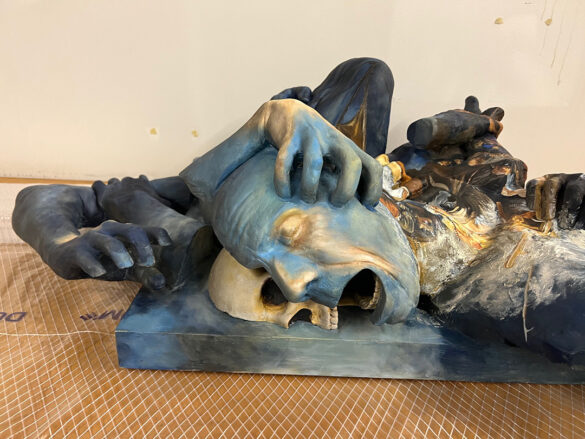 Ms. Spector said, “…this is a very terrifying experience. Not only have I lost my art studio and about 20% of my artwork, I put myself in danger every time I go back to the studio to empty out my belongings.”

In a social media post, Vincent Fink also explained that his restoration efforts have not been 100% successful: “I’ve read up and gotten professional advice but some efforts have already been made and didn’t completely heal the work. I am moving onto secondary and tertiary methods but I might need to recreate some works or just sell them as they are. I am considering having some kind of sale of this nature… I spend anywhere from 50 to 200 hours on any given piece. So the destruction to my studio has set me back considerably, especially on my latest works.” 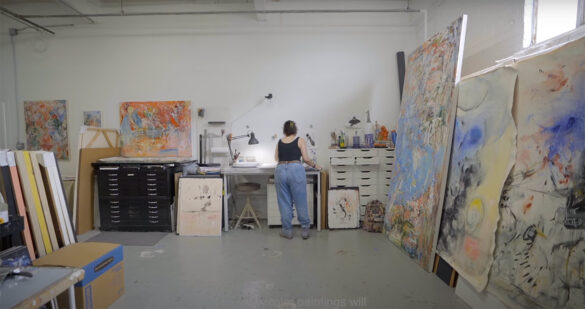 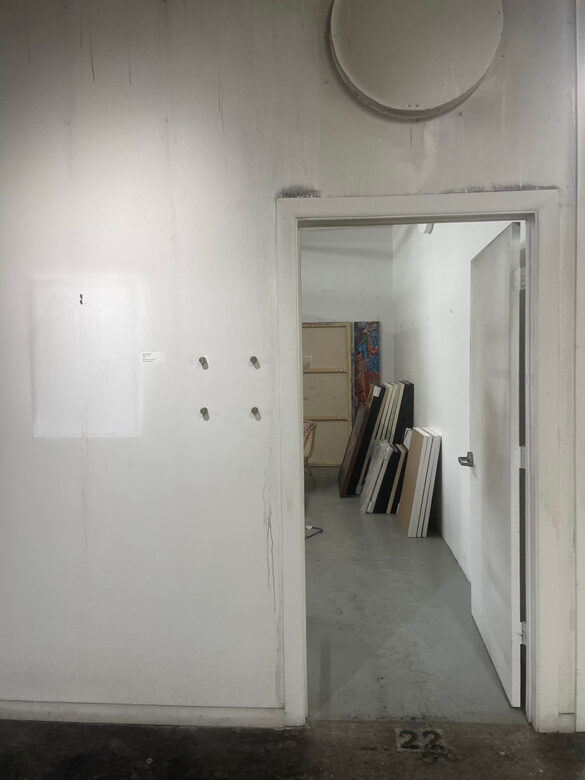 Erika Alonso told Glasstire, “I have barely begun the clean-up process. As in, I haven’t. I am at a standstill with my insurance claim; I took photographs, but am still unable to move my studio contents. This is the first time I’ve ever had to make an insurance claim and it’s a whole other level of frustration and uncertainty. I’m starting to realize that the recovery is going to be a very, very long process.” 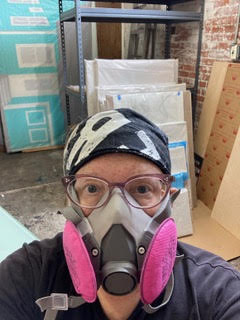 Cary Reeder wears a respirator as she cleans her studio.

Because soot, which has permeated all areas of the building, is toxic, artists have been donning Tyvek suits, respirators, and gloves to undergo the work of cleaning, packing, and moving their studios. HAA confirmed that TX-CERA volunteers will be onsite at Winter Street Studios this Saturday from 3 pm to 5 pm to hand out free Personal Protective Equipment (PPE) and other supplies to artists.

Aside from bringing in TX-CERA, HAA has also activated its Emergency Relief Fund. HAA’s Director of Disaster Services, Lauren Hainley, stated in a press release, “To many artists and creatives, their studio is a sacred space. Our research shows that Houston undergoes a federally declared disaster every 9 months on average. This means that Houston artists are particularly vulnerable to catastrophes. During my tenure at HAA, we have worked diligently to advocate for artists and to set up processes that will enable us to better assist artists. In this case, the Disaster Services team was able to activate the Emergency Relief Fund in less than 12 hours.”

HAA told Glasstire that as of Thursday, January 19, there has been nearly $48,500 donated to the fund, though the 53 applications submitted by Winter Street artists document a total of $1,125,000 in damages.

As of Friday, January 20, HAA has distributed funds of $750 or $1,500 via direct deposit to 24 applicants. The remaining applications are still pending review by a group of panelists, which includes artists and conservators. If artists have questions about receiving funds, HAA encourages them to contact Lauren Hainley at [email protected].

A fundraiser will be held tomorrow, January 21 at the Silver Street Studios Warehouse from 11 am to 3 pm. Over 100 artworks will be for sale, with 100% of the proceeds benefiting the Winter Street relief fund. The event has been organized by Sawyer Yards, HAA, and Fresh Arts.

When asked if any additional funds would be made available for affected artists, Houston Mayor Sylvester Turner told Glasstire: “We are a city that helps one another. When tragedy strikes, we always come through for those who are in need. The loss of property at Winter Street Studios is saddening but we should look at it as a chance to help. As Mayor of the City of Houston, I am doing my part in finding resources to help the affected artists.”

Despite the efforts of HAA, Ms. Spector feels strongly that “the Winter Street Studio artists are in desperate need of an advocate.” On Wednesday, January 18, Ms. Spector created a public Facebook Group as a venue for affected artists and volunteer conservators to continue discussions about cleaning and stabilizing damaged artwork. Along with the artists’ conservation needs, they face many other hurdles, including storing work, purchasing new equipment, and relocating their studios either temporarily or permanently.

Ms. Reeder has found a new studio a few blocks away and does not plan to return to Winter Street, though she has fond memories of the space. She remarked, “I need to put this chapter behind me and start anew. I am looking forward to getting back to art making, whenever that will be, and already have an idea for an exhibition involving Tyvek suits. We’ll see.”

January 21, 2023: This article has been updated to include Mayor Sylvester Turner’s quote about the Winter Street fire, and his attempt to find additional resources for affected artists.

GREAT ARTICLE AND I PRAY THAT THE MAYOR AND THE CITY OF HOUSTON CAN HELP..