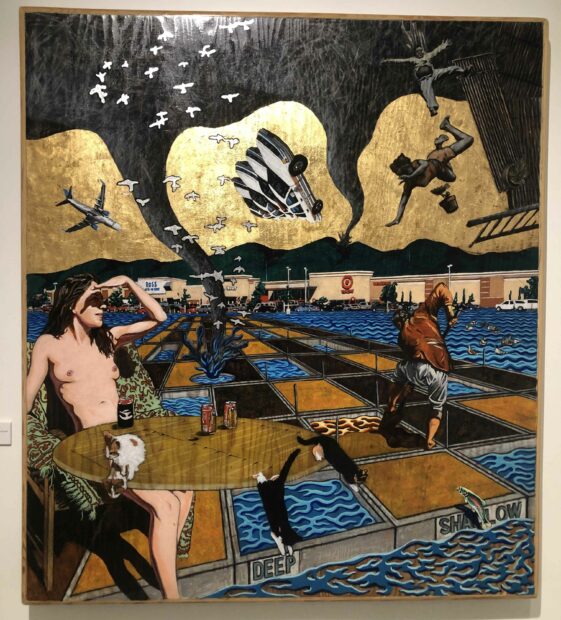 I’ve come to know Jeff Wheeler as a San Antonio art ambassador — one of the amiable hosts behind the transportive Echo Bridge concerts, a collaborator with Texas music legend Daniel Johnston, and a curator of a recent Jad Fair exhibition — but I knew little of his artwork. So when I was asked to review Actual Scenes / Genuine Characters, an exhibition that brings Jeff together with his brother Bryan at Houston’s Deborah Colton Gallery, I was a bit hesitant.

But maybe this lack of preconception, “this babe-in-the-woods-flying-blind approach,” could actually be an advantage? I’d arrive fresh, not burnt out or jaded. So I slid through Houston’s spaghetti freeways and endless expanse and drove to the gallery’s cozy confines.

Inside the gallery, the Wheeler brothers use canvas, collage, acrylic, and other traditional techniques to remix Western tropes into a tightly conceived collection of imaginary landscapes rooted in their native Lubbock. Brothers Bryan and Jeff are Texas art scene veterans, and ran the Wheeler Brothers Gallery in downtown Lubbock for years. Their Lubbock origins — largest city on the Llano Estacado — dovetails with their show’s deconstructed Texas mythology.

“Where me and Jeff grew up, we always had a love-hate relationship with this place,” said Bryan in a recent phone interview.

Texas, at one time, was the Western edge of American expansion, and this residual idea of The West and manifest destiny — an unfolding landscape given to European settlers by the divine bearded one himself — is pretty damn hard to shake. It is embedded in every lonesome cowboy ballad, every photo of an (admittedly) beautiful sunset, every song about ‘the open road’ or ‘riding the rails,’ every hardscrabble ‘pull-yourself-by-your-bootstraps’ self-help session. Manifest destiny long ago washed to the Pacific and now we’re all left here to wallow through the backwash. The ‘open range’ now feels more relevant in reference to an empty mall parking lot. The wider world has moved on but our origin story — our mythology — has not. 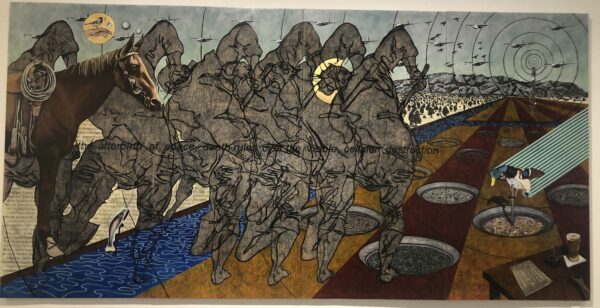 A painting on view in “Actual Scenes / Genuine Characters”

The Wheeler Brothers’ Actual Scenes / Genuine Characters deftly navigates this gulf between inherited symbols of The West and the decidedly less glamorous reality we actually inhabit, presenting individual works from the brothers along with collaborative efforts. The cumulative effect makes this exhibition a skewed, humorous, bleak, and wholly magical melding of the minds.

The brothers approach their idea of ‘The West’ from different, and yet complementary, angles. Jeff’s pieces often incorporate old land surveys, deeds, maps, and other government ephemera, and feel like travel brochures to a jumbled post-colonial wasteland. His work The Wild West, for example, reads like a Wild Bill western show brochure, while Just This Side of Magdalena collages football players sprinting across legal paperwork and a fire hydrant engulfed in flame. Jeff’s effortlessly humorous dissections of modern life fully resonate with the alienation felt by ‘outsiders’ all across our state, and his humor opens the door to a serious discussion.

“That started for me in grad school,” says Jeff.  “One boring speaker after another talking about his or her art saying, ‘if you don’t get it, you’re not smart enough.’  I knew I didn’t want to be that. In order to not be that, you have to take the work seriously, but not yourself. Humor always had to be a part of it. It’s easy to get art for the common people too, with humor.” 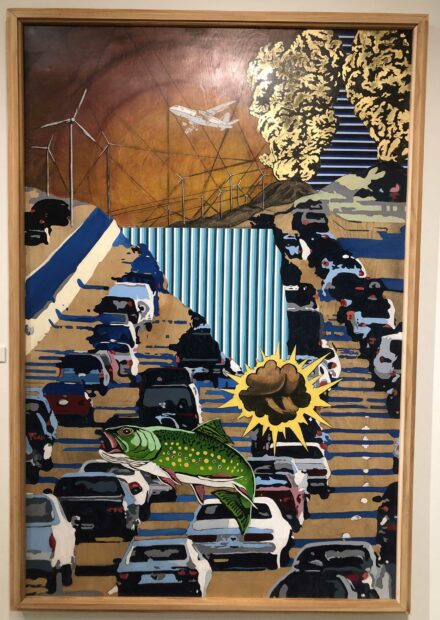 While some of Jeff’s pieces don’t fit as clearly into the ‘Western’ theme, that doesn’t blunt their impact, especially the Lost in Texas series, which depicts those Texans lost to Covid-19 in a grided, high school yearbook format. Jeff meant to depict every victim in Texas, but gave up the task when the numbers proved too overwhelming. When taken into consideration with the title of the exhibition, the piece takes on an added resonance. These COVID victims were indeed genuine characters in a national tragedy.

The ‘Western’ themes in Jeff’s works are natural extensions of his West Texas background. “In my early work I thought I would only do Lubbock landscapes forever because it provided such a great horizon line,” the artist tells me. “And now I use mountains, which I stole from Bryan! You’re in Lubbock, but you see those mountains in the distance, looking towards the west. So Lubbock as a gateway to the west. To add to that, the old papers I use come from the 1880s, so that’s straight out of the old west. I’ve always been fascinated with Buffalo Bill, not just because he came from the west, but also because he was the first real showman of America, the first celebrity all over the world. He’s a big part of that.”

A glowing western sunset is perhaps the most overused image of all ‘Western’ art, which opens the door for playfully deconstruction. In the background of many of Jeff’s pieces, rather than an exquisitely rendered sunset, sits a large blank spot reading “Insert Beautiful Sunset here,” or some localized variation on the phrase. 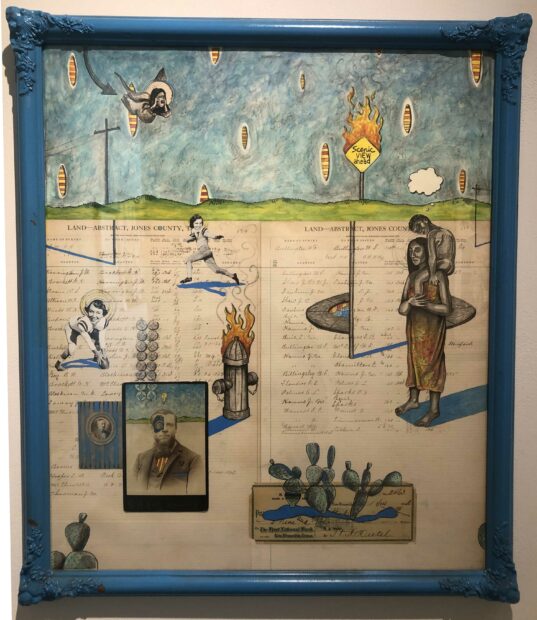 Jeff Wheeler, “Just This Side of Magdalena”

“I could take all day and paint a realistic beautiful sunset or I could make folks laugh and they insert the image themselves and I move on to something else,” says Jeff. “For me, sometimes I want the idea more than I want to sit there and paint it.”

Bryan’s canvases, meanwhile, largely eschew the humorous and playful, and take on a decidedly more dystopian tone, with recurring imagery of planes crashing, endless parking lots, and snarled freeways. The work The Souls of Texans Are in Jeopardy in Ways Not Common to Other Men #52 pulls no punches, neither in its title nor its jumbled contents, like the two-headed nude drinking a pool-side beer next to fleeing cats, a crashing plane, tornados, bullseyes, a Spanish missionary, and barbed wire. Like much of Bryan’s work, it’s evocative, skillful, and eludes easy interpretation.

Drawing inspiration from famed Black Mountain poet Ed Dorn’s Gunslinger series —  itself a dissection of the west — Bryan’s Sublime, Starring the Man is arguably the show’s centerpiece with its massive depiction of migrating ducks against a row of identical workers unearthing a vast plain. It feels like you could step right into the painting, although you might not want to. Knowledge of Ed Dorn doesn’t feel like a prerequisite to understand the work, but I couldn’t help but feel I wasn’t getting the full picture and made a mental note to check out some Dorn from my local library. 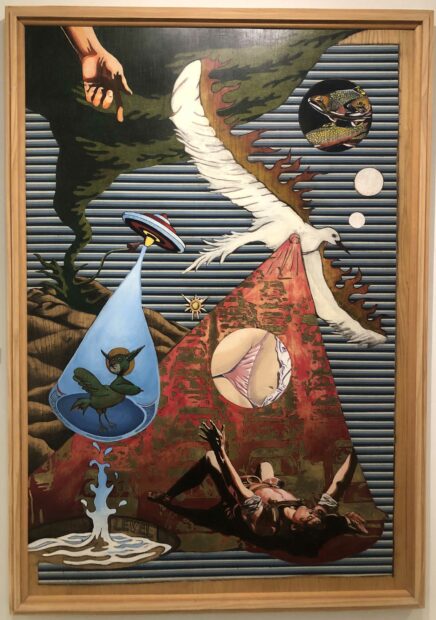 Bryan Wheeler, “The Opposite of Poetry”

Moving from the main gallery space to several adjoining rooms reveals further works that double down on Bryan’s ornate, beguiling style. The Opposite of Poetry playfully parallels a Judeo-Christian origin story with an alien landing; each half of the painting shows a heavenly beam zapping down to earth. In one painting the beam comes from a flying saucer, and in the other from a glowing dove, a representation of the Holy Spirit. It was unclear how the title related to the piece, but I enjoyed the imagery.

Infinite Jest, a literary nod to David Foster Wallace’s door stopper tome of the same name, shows a truly bleak western landscape, and would probably only prove jest-worthy to some divine creator with a cruel sense of humor. A large fish leaps over a crammed freeway, which has itself been peeled back to reveal neon bars reminiscent of a stylish jail cell, while a plane departs from between two erupting volcanoes. A very hectic day indeed.

Creation Myth #7 might have been my favorite of Bryan’s — an upsetting and slyly humorous creation jumble taking place in a Target parking lot that’s also part swimming pool and part gridded void. A nude woman peers out from a comfortable table while a bandana-clad laborer peels back another portion of the parking lot grid to reveal glowing red water. If this is confusing to read, it’s equally as confusing for me to write, but it’s this jumbled difficulty that provides the appeal.

Some of my favorite pieces were the collaborative ones, combining Bryan’s bleakness with Jeff’s humor. Norman from Montana, for example, hilariously updates a civil war-era portrait into a sleazy ’80s man with his shirt unbuttoned to reveal a dollar sign medallion and patchy chest hair. Humor is a shared love for both of the brothers. 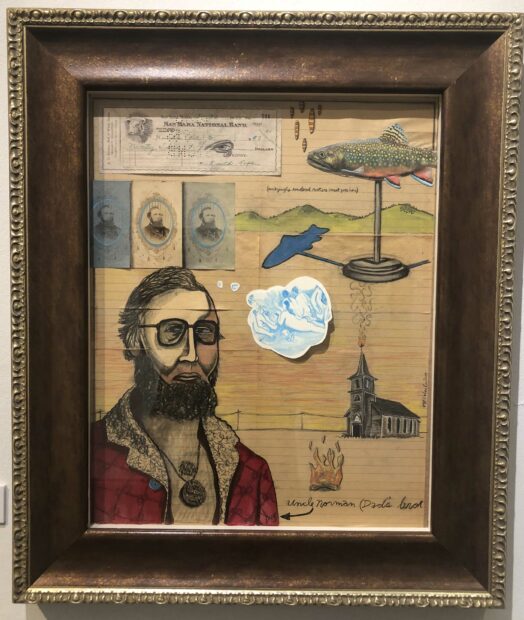 “It’s pretty easy in art to make somebody sob or contemplate while rubbing their turtleneck or beret,” says Bryan. “It’s hard to make somebody laugh. That’s why Jeff has always been my favorite contemporary artist. And he’s always been the one of us that’s pushing it. When we were teenagers, Jeff would drive 45 miles to the nearest town and sit there with all these little old ladies and draw landscapes.”

In multiple collaborative works using the show’s title, their humor toys with blasphemy. The first piece, entitled Actual Scenes/Genuine Characters, depicts Jesus crucified over a hot tub, while a second piece of the same title shows a gray-haloed matron presiding over a burning foot, a hot tub, a western horizon, and a patent certificate.

If a hot tub crucifixion seems over the top or absurd, that feels like precisely the point. The works are meant to provoke, to shake us awake, and poke holes in our worn-out Texas mythology.

“Lubbock is a symbol of what the west has become,” says Bryan. “It revels in its myths, which are primarily ‘cowboy-farmer-rancher-male-exceptionalist.’ Exceptionalism meaning we see ourselves as ‘different’ and ‘better.’ It’s all over America, but in Texas it’s just amplified. That myth, it’s something I’d like to expose. I know I’m not the first. Growing up here, you’re surrounded by it. It exerts so much power over us. Most people aren’t aware.”

“Why exceptionalism is so dangerous and why we need to keep recognizing it is because it’s exclusionary,” continues Bryan. “Othering. It’s heavily individual — a monadic individualism. All our cities are incredibly diverse, but if our Texas identity is solely based on these old myths, there’s no room for anything else.”

Not content to simply sweep away old myths, the Wheelers are seeking new ones. Can our modern homogeneous landscape support new myths to replace the old? Is the modern West fertile ground for humanity to create a shared history?

“When I was little, my family went to Dodge City,” remembers Bryan. “They had the old decks by the old west saloon and all that romanticized version of the west. Me and a buddy went back out there a few years ago and as we were approaching it was a long line of Sonic, Burger King, McDonald’s, Wendy’s, Sizzler. Completely surrounding the historic site. Can history be made in those kinds of places? Can a revolution be planned in a McDonald’s playland?”

The show doesn’t answer these questions but, as is often the case, the inquiry is the thing of importance. Asking these questions forces us to find our own answers. Bryan and Jeff Wheeler have used our unfortunate modern predicament as fuel for a thought-provoking, conceptually cohesive show well worth your attention.

Love the article! Makes me want to drive to Houston and see them in person.

Thank you Caroline! Where do you live? This show will be travelling to the MAC in Dallas next opening on January 14. Come see us there!

Really cool! That whole collaborative Wheeler Bros art thing is what came to love about both of you guys. I think nobody does it better!