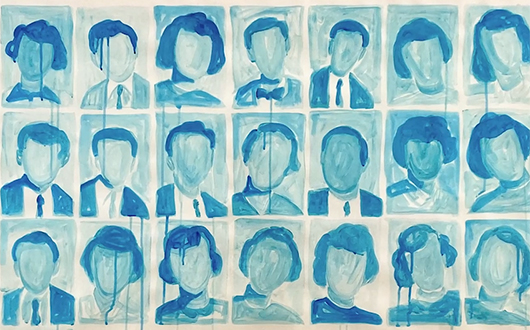 “Deborah Colton is pleased to present Actual Scenes/Genuine Characters, a selection of artworks by Texas art scene vets, the Wheeler Brothers. Their inaugural show at Deborah Colton Gallery, AS/GC offers a fresh look at the Wheeler Brothers’ often humorous and sometimes acerbic reflections on the ethos and patho(logie)s of our moment. In addition to a large and varied selection of their individual works, this exhibition also features brand-new, never-before-seen collaborative drawing and paintings (which are always in high demand) between the brothers.

Originally from the panhandle of West Texas, the Wheeler Brothers (Jeff and Bryan) emerged on to the Texas art scene in the late 1990s with their ‘meta-regionalist,’ irreverent, and genre-bending paintings, drawings, sculptures, and music. Since then, they have become fixtures, regularly exhibiting and curating exhibitions across the state, nationally, and internationally. They have also collaborated with many of the biggest names in Texas art. Many will recognize them through Ulterior Motifs, a series of ongoing exhibitions/happenings they have organized since the early 2000s that have featured Texas art legends such as (among many others) James Surls, Lucas Johnson, Sharon Kopriva, and The Art Guys.

Currently, Jeff lives and works in San Antonio, where, in addition to creating public mural, and the works seen here, he is the founder and director of C7 Gallery and co-founder and curator of the Echo Bridge Concert Series. Bryan maintains his studio in Lubbock, where he also records and produces music with his band, Los Sonsabitches, and is a lecturer at Texas Tech University.”