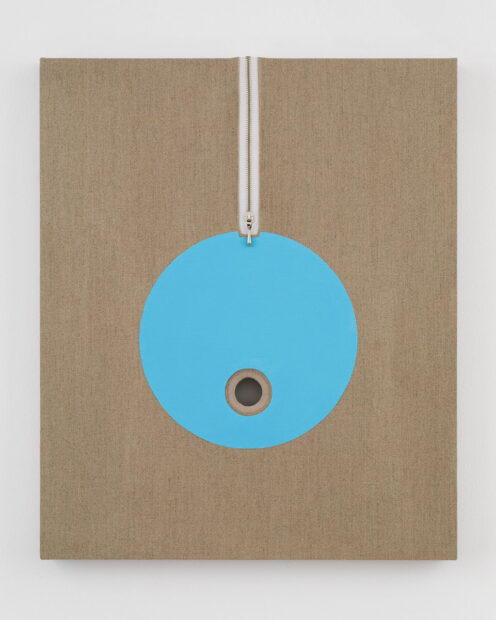 There is a shellacked magic to Donald Moffett’s resin paintings, an edibility of cured color that satisfies the eye like candy. These works, however, are anything but sweet. Moffett’s art emits an aura — sometimes subtle, often not — of sex, science, and rage. In Nature Cult (early freeze, late sleet), on view at Lora Reynolds Gallery in Austin, 12 recent and revisited works (as well complimentary bumper stickers that read Quit Gas Live Forever … ) confront the viewer in unexpected and thrilling ways.

“There is this impulse of wanting to touch it and not being allowed to,” says gallery director Colin Doyle of Moffett’s work. Methodically primed, painted, and epoxied, the artist’s resin paintings — which he began producing in 2016 — glisten like lubricated latex; their curves and contours, and at times, sharp points, move the eye all around the monochromatic surface before settling into each plywood opening. It is a surprising contrast, this glossy top coat on plain wood panels, with variously shaped cutouts that reveal the wall the works hang on. Solid and porous all at once, Moffett’s paintings urge you to get beyond the surface.

“The work is super labor-intensive,” says Doyle. “You only have so much time with the epoxy, it starts to dry really quick.” The process goes something like this: each resin piece starts out as a 3D model, rendered digitally and cut out of one or more pieces of plywood. The wood is then meticulously masked off with tape — its edges, its holes — before a layer of primer goes on. The masking tape is then removed and a second layer of tape is applied in preparation for the coat of paint. The tape is removed again, reapplied a third time, and readied for the epoxy resin — which is now contaminated with air bubbles after having been mixed — and hit with a torch before the whole thing sets slick. 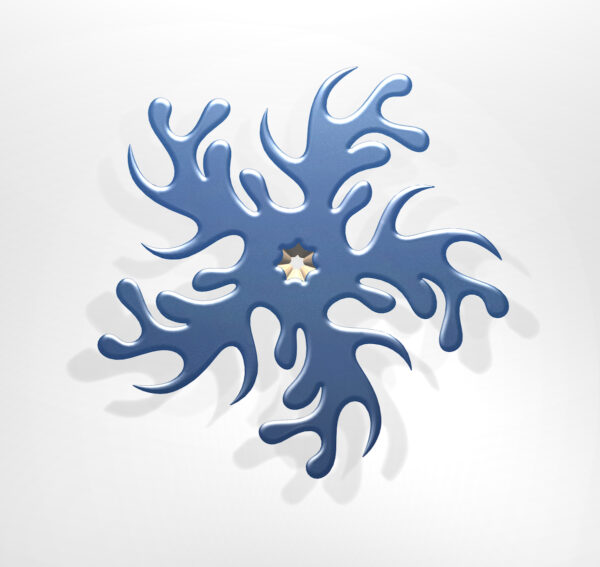 The show includes an example of the artist’s early extruded paintings (though it was made in 2021), Lot 022421 (nature cult, emblem 8), which recalls perfectly piped frosting, or even a white shag rug. The other works in Nature Cult avoid this kind of textural craze, tending toward poured, more minimalist surfaces. Regardless, the focus remains on openings and holes, and holy openings: what gets through personally, politically, pandemically. 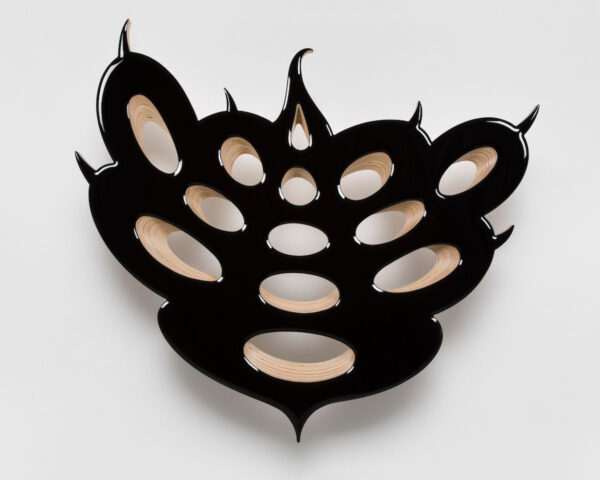 In the gallery’s project room, a series of four paintings rapidly depart from the rest of the show’s “wet look.” Raw linen and rabbit skin glue instill a matte minimalism, which is neatly disrupted by metal teeth and whipstitched openings. If the artist’s poured resin pieces are informed by biology, these Fleisch (German for flesh) paintings promote the marketing of that biology. Zipped up, full frontal, bearing a round, tight hole: each one offers and denies access while maintaining control.

Moffett first produced his Fleisch paintings in 2007, and returned to them in 2020 with the addition of blue paint. The original impetus came from a 2001 news story in Germany about the Kassel Cannibal, who placed an online ad for a male willing to be killed and consumed. (The drugged victim attempted to eat his own penis before he was fatally stabbed and sautéed with garlic.) Moffett is said to have lost his appetite in general after reading this story; years later, the Fleisch paintings came about.

It is unclear why the artist returned to the series in 2020, introducing a water-like element to the works’ pallor, though one might see his increasing environmental concerns as playing a role. A longtime resident of New York City, Moffett grew up in the Texas Hill Country and studied biology and art at Trinity University in San Antonio. His praxis is a clear reflection of both pursuits, signaling urgency, intimacy, love, and death. Glory holes and global health are as closely related as climax and climate change. 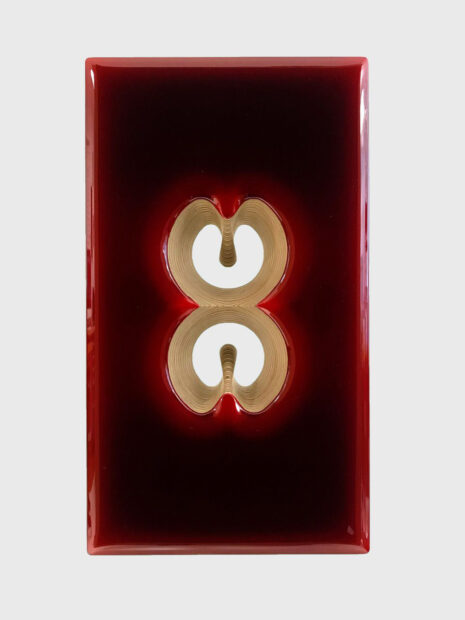 In recent years, Moffett’s polemic message has shifted gears: “With the tightening noose of social media, and the retinal-screen more generally, my empathies and intellectual inquiries are now with nature,” the artist said in a statement in 2016. We see this in Moffett’s Lot 052021 (the air we breathe) (2021), a large-scale painting from the 2021 Texas Biennial, which features a mesmerizing expulsion of bubbles from a pristine surface of sky or water.

At Lora Reynolds, Lot 011221 (merge, red) (2021) and Lot 092320 (undulate red) (2020) link the coronavirus pandemic with the AIDS epidemic. Both paintings have a smokey, somewhat tainted red color, and both annunciate the opening in their center: one, a uvula, the other, a urethra. Presented side by side, a comparison of transmission emerges and carefully connotes that a viral issue is not a moral issue.

This is why Nature Cult is such an apropos ode to seduction, sadism, destruction, and life. As for the impersonal slew of numbers ascribed to each painting? Month, day, and year: good record keeping in times of crisis. In case of all-out catastrophe, find a hole and live forever.