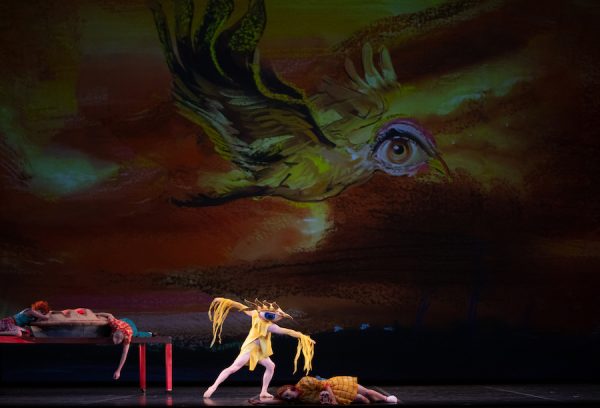 In the new feature-length dance work Grimm Tales, Ballet Austin artistic director Stephen Mills has taken inspiration from, and collaborated directly with, New York visual artist Natalie Frank. The ballet, a reimagining of fairy tales made famous by the Brothers Grimm, premiered at the Long Center for the Performing Arts in late March. A short walk over the First Street Bridge, a synchronous Grimm Tales debuted: Lora Reynolds Gallery opened a small solo exhibition of new Grimm-inspired drawings by Frank, each of which makes an appearance in the eponymous dance production. 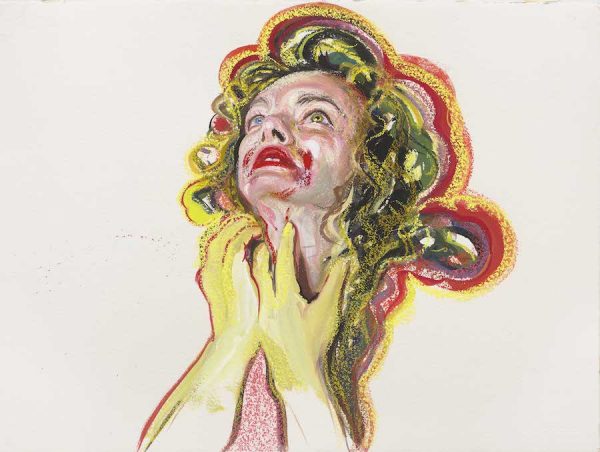 Since 2011, Frank, who was born in Austin, has been producing sinister and voltaic interpretations in pastel and gouache of many of the Grimm folk tales. These include well-known stories like Rapunzel, as well as obscurer narratives like The Devil with Three Golden Hairs. But Frank is not interested in the sanitized, male savior-centered versions that populate Disney’s canon or Scholastic Book Club catalogues. Instead, she borrows from the original, subversive German folk tales — oral stories often relayed by women — that Jacob and Wilhelm Grimm transcribed in the 19th century. Integral to those stories are women in complex roles, frequently empowered and occasionally volatile.  In a 2015 interview with Artforum, Frank recounts reading folklorist Jack Zipes’ The Original Folk and Fairy Tales of the Brothers Grimm at the recommendation of artist Paula Rego. She describes being taken with how “dark, sexual, and violent” the stories were, sensing “that there were such incredible roles for women… which [she’d] never noticed in most fairy tales.” 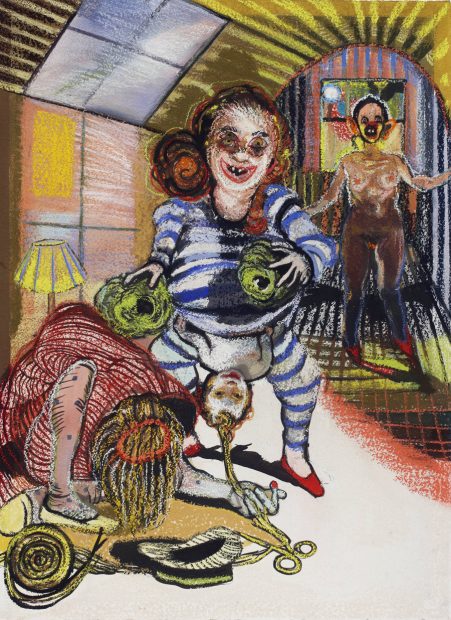 Natalie Frank, Rapunzel I (2011-14), gouache and chalk pastel on Arches paper, 22 x 30”. Courtesy of The Blanton Museum of Art, The University of Texas at Austin.

More than two dozen of Frank’s earliest interpretations first met the public in a 2015 solo exhibition, The Brothers Grimm, at the Drawing Center in New York. For that body of work, Frank zeroed in on the women in the narratives, and they are hardly idealized or romanticized. Later that year, the vividly muddy pieces traveled to Frank’s hometown for an expanded exhibition at the Blanton Museum, and then on to the University of Kentucky Art Museum in Lexington. A book featuring 75 of the drawings, Natalie Frank: Tales of the Brothers Grimm, also came out that year (Zipes, among others, contributed essays). It was at the Blanton that Stephen Mills encountered the work and approached Frank about a stage adaptation.

The resultant 80-minute ballet explores three familiar stories, warts and all: The Frog Prince, Snow White, and The Juniper Tree. Each features an original, driving score by Austin-based composer Graham Reynolds, with whom Mills collaborated in 2015 on Belle Redux, a dark retelling of Beauty and the Beast. Upon enormous stage scrims, crisp projections of Frank’s fervid drawings create an evolving, psychedelic backdrop. Occasionally animated, the drawings pulse along to the angular, post-pop sonics of Reynolds and his live music ensemble in the orchestra pit. 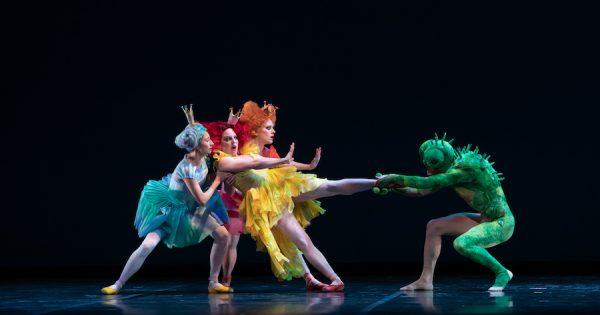 Characters leap to life in turbulent, spirited costuming by Tony-nominated designer Constance Hoffman. Familiar with Hoffman’s work, Frank sought her out to bring her indelicate Grimm drawings into the corporeal plane. The costuming for Snow White is particularly clever. Darting through the woods in form-fitting, blaze-orange deer hunting camo, the Huntsman is anachronistic but not indulgent. In a petaled, violet suit, the vindictive Queen resembles an early-purple orchid, or Orchis mascula — perhaps a double entendre on the Latin epithet. The wiry-haired boar is convincingly feral, thrashing its humped body about, before being slain and having its heart ripped from its chest. Eye candy abounds. From the colors and textures in Frank’s pebbled drawings, to the stage props Frank hand painted, to Hoffman’s Hessian rags and haute regalia, it’s all sugar and electricity. For a ballet, it feels an awful lot like watching the Flaming Lips. 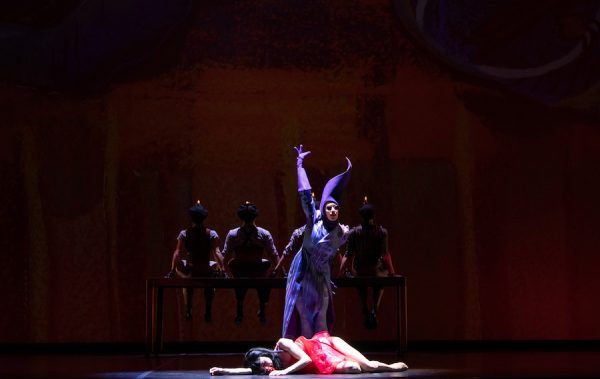 As each story unfolds, Mills’s choreography is meticulous, not prescriptive. Dancers coil and unwind fluidly per narrative beats, encountering each other with convincing surprise or clandestinely stalking one another with poetic gaits. There’s a dreamy quality to their movements apropos of the fairy-tale settings, suggesting a world akin to our own, but having existed long enough ago that the fog of memory makes gravity a little bit softer. Without dialogue, the audience is free to elaborate on what exactly each interaction means. The women, in a nod to Frank’s drawings, get the juiciest roles. The Stepmother in The Juniper Tree is horrifying and magnetic, decapitating her stepson, then baking him into a savory pie that his father devours like a dumb glutton. She, like the aforementioned Queen, is as exciting to watch as the patriarch antihero from any prestige television series. 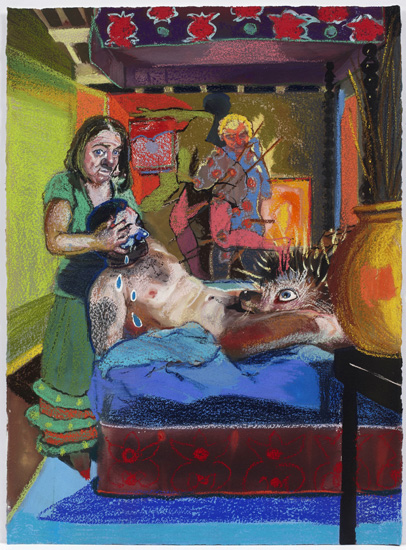 When Frank began adapting the Grimm fairy tales into drawings, the early pieces recalled the work of two powerhouse German painters: Otto Dix and his brutal and “degenerate” war-time paintings, and the retina-bending, chromatic dissonance of Charline von Heyl’s abstract work. Frank’s pieces from 2011 to 2015 were tactile and toothy, confrontational, and wryly obnoxious in palette. Each was a discreet, acerbic narrative panel that didn’t mind being a little garish to look at. Further, her apparent delight in perverting the familiar feels in conversation with Mike Kelley, especially his and Paul McCarthy’s crass 1992 puppet “adaptation” of Johanna Spyri’s children’s book Heidi (or, perhaps more appropriately, with Laura Parnes and Sue de Beer’s feminist adaptation-of-the-adaptation, the impressively more abject Heidi 2 from 1999-2000). 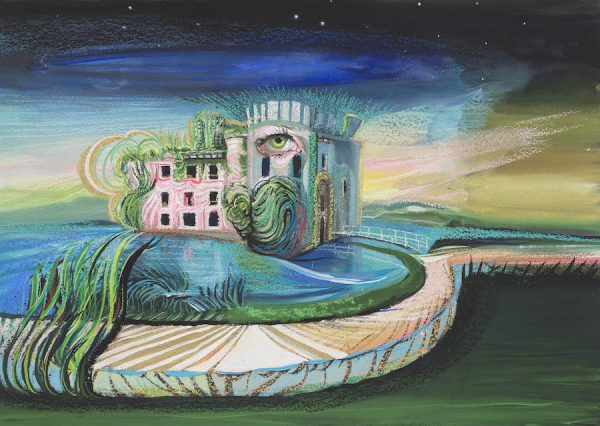 Natalie Frank, Drawing for The Frog King (2018), gouache and chalk pastel on Arches paper, 22 x 30”. Courtesy of the Artist.

The eight new gouache and pastel works on paper at Lora Reynolds Gallery, all from 2018, are more dialed down. Framed tastefully, and arranged — following the flow of the dances — from cool colors to warm, they brighten up the gallery’s smaller Project Room. Where Frank’s previous Grimm pieces depicted specific, cluttered scenes, the newer works are scenic, and simple. And necessarily so: in Mills’s ballet, these are among the works that appear projected at a massive scale, creating environments for each dance. Therefore, they ought to be calmer, offering visual space for dancers and set pieces to command attention on stage in front of them. Having seen the pieces so large at the ballet, it’s rewarding to inspect them closely. Every work is modest in size at 22 x 30 inches, save for the 22 x 60-inch diptych Landscape Frog King. Lora Reynolds Gallery is not presenting the entirety of works that Frank produced for the ballet; there are a number of more unsettling drawings projected on stage that aren’t on the gallery’s walls. While the intimate exhibition isn’t quite as sensational as Frank’s more autonomous Grimm pieces, it works well as a fascinating mini-archive — a quiet documentation from an ambitious and rowdy stage production.

For those who prefer their fairy tales on the more discourteous, berserk, or prurient side, Grimm Tales satisfies. Part of the appeal is the dense layering of simultaneous translations — from 19th-century oral tales, to the Brothers Grimm’s transcriptions, to popular American culture’s sanitizing, to Natalie Frank’s re-soiling, to Stephen Mills’s live spectacle — and how that complicates authorial authority. Abstracted, the ballet and Frank’s drawings leave gaps in the narratives, encouraging questions and inviting audiences to project or glom meaning as they see fit. Grimm Tales levels a pointed critique at patriarchal tropes in stories that many of us grew up with, and in doing so, manages to have a hell of a lot of fun.

The premiere of Ballet Austin’s ‘Grimm Tales’ at the Long Center took place on March 29-31. Commissioned by the Butler New Choreography Endowment.