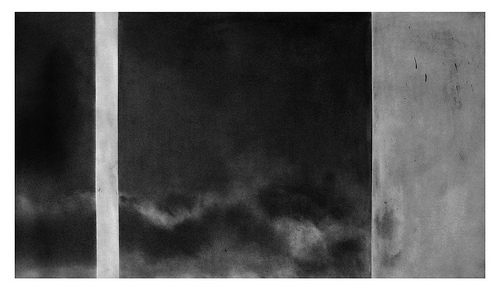 Grief is a very personal thing. We all grieve differently, and we all attach grief to different people, things, and situations in very different ways. Graham Dolphin tackles this idea of grief in his exhibition RIP at Lora Reynolds Gallery, but rather than allowing a real glimpse at grief, or even a legitimate exploration of how people grieve, the exhibition comes off as fake, as a mimicking satire of a genuine feeling of loss. 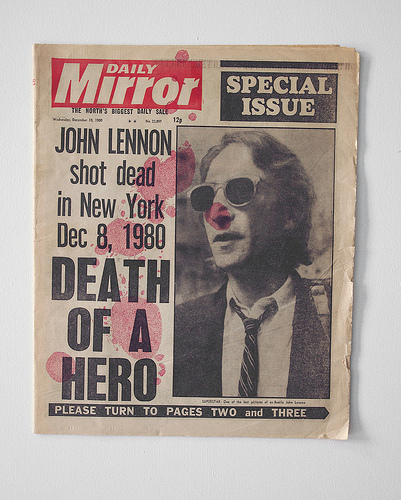 Large graphite drawings, one in each gallery, are meant to depict what was seen out of the window in the final moments of two unnamed dead celebrities. Formally strong, these drawings could have stood alone from the rest of the exhibition; pristine, shining gradations in the graphite are so thickly laid on the paper, they act like abstract paintings.

Yet, the most technically skillful works by far are the front pages of two newspapers documenting the deaths of John Lennon and Kurt Cobain. From afar, they are ordinary front-page headlines, but once you get closer, the detail of the artist’s graphite additions is almost painful to look at.

Sculptural objects placed throughout the show are reproductions of memorials created by fans. A precious pile of painted stones sits on a pedestal; a heavy stone from the site of Princess Diana’s car accident in France, littered with graffiti, hangs precariously from a wall in the front gallery.  The final and most ambitious object is a full-size reproduction of the fence from Dealey Plaza, the site in Dallas where John Kennedy was assassinated. It completely obstructs one side of the gallery space. The wood is aged by hand as are the nails and screws holding it together. It’s an impressive piece, but I was disappointed to learn that most of the objects in the exhibition were actually constructed using Google images of the originals, and were neither visited by the artist himself nor seen with his own eyes. 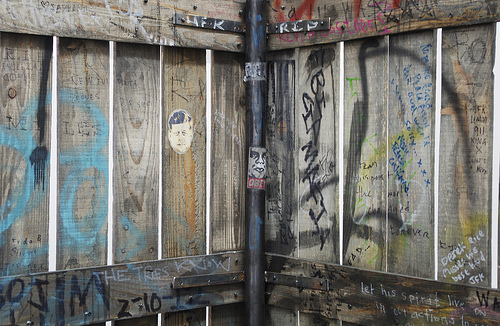 This is where the balance between respecting the grief of individual fans and admirers of the famous figures became a blatant irony. The artist was not interested in respecting this grief or investigating how the public grieves for these figures in contemporary culture, but rather in replicating these sites of homage.

These figures have become adored by the public for their presence, their contribution to society and popular culture. While celebrity culture has lately become somewhat absurd, mocking the grief of adorers of John Lennon, Princess Diana, and John Kennedy seems blasphemous. These are people that contributed to changing society for the better, and are also people whose lives were lost in the midst of making change happen. It seems unfair to turn the sites of grief that the public has so devoutly created into fake objects. The press release states that Dolphin is interested in the one-sided celebrity fandom, and how the public attaches themselves to celebrities. I agree, that in contemporary culture this relationship has been taken to extremes, and now we see talentless people like the Kardashian clan, the Real Housewives of Wherever, or even bloggers like Perez Hilton reach heights of celebrity that are astounding and absurd. However, the celebrities that Dolphin has chosen to reference have made significant contributions to society. John Lennon and Kurt Cobain revolutionized music, Princess Diana turned the royal family inside out and her philanthropy inspired a generation of wealth to contribute to the common good. 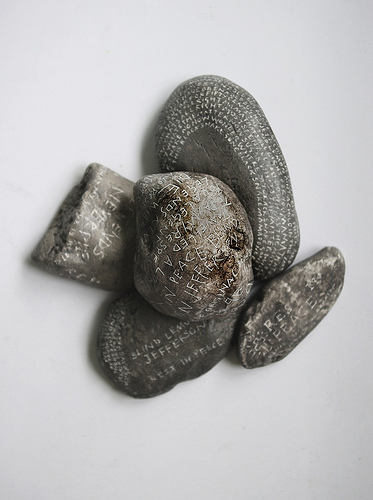 I left RIP with the distinct feeling that the artist is in fact not at all interested in the process of grief, but rather the remnants of this grief. The artist is detached, pulling images from Google to complete the work, separating himself from the actual grief that people have felt. The show was depressing, not just because of the subject matter on death and grief, but because there was too much distance between the real feeling of grief and the artists’ treatment of it. It was too distant, too sterile, too cliché. It offered no emotional treatment or empathy for any of its players—the fans who had originally contributed the creation of these sites of grief, the celebrity who died, or the viewer who plays an even more distant role in the entire process. While the exhibition is not lacking in skill, it’s certainly disingenuous to the point that it’s insulting, mainly because its treatment of human behaviors, in this case very legitimate grief, is too sterile and cold.