The Paper Pushes Back: An Interview with Ben Durham 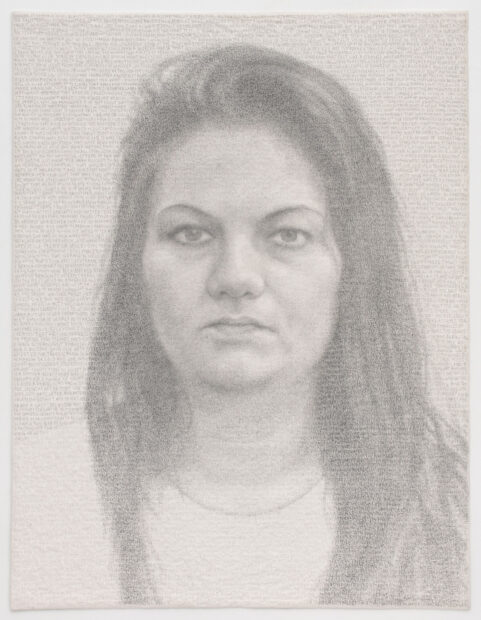 “Amanda is nearly a total blank to me now,” writes artist Ben Durham. “Just a distant memory of a snarling lip.” Words take on a cellular quality in his Text Portraits, photo-realistic figures formed by language, memory, and impossibility. For 18 years, Durham has been studying friends and former classmates from his hometown of Lexington, Kentucky, sourcing their mugshots from an online database and producing large-scale works composed entirely of his written recollections of their lives. His graphite-on-paper drawings immaculately depict the visual, but the strain of each sentence suggests something inscrutable.

In Six Stories, on view at Austin’s Lora Reynolds Gallery, Durham presents six new works, each one a face of the opioid epidemic. The artist has chosen to disclose his subjects’ crimes in this show, graying the lines between “diseases of despair” and the mechanisms of our carceral system. Compared to Durham’s previous portraits, his Six Stories are smaller and more intimate in scale, and lighter and more legible in text. An archive of honesty if not accuracy, and a way for language to convey what the image cannot.

Barbara Purcell: Tell me about your hometown.

Ben Durham: Lexington is a really strange place. Part of if wants to be the genteel Old South, but most of the population is Appalachian working poor. You have this old strange wealth, the horse industry, and a vital downtown queer arts community that goes back to Tennessee Williams’ days. I grew up downtown, I knew nothing about horses or horse farms, and I didn’t know anything about the genteel set until high school, when the zoning expanded beyond my neighborhood. The place was just mind boggling in a hundred different ways. 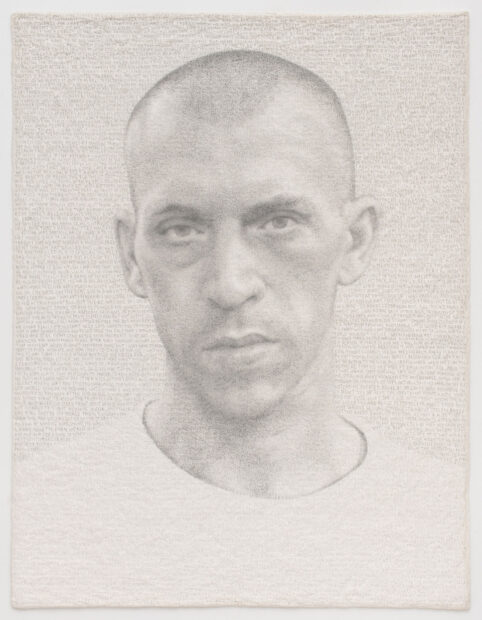 BP: You’ve been making Text Portraits for almost 20 years. How did this series begin?

BD: A friend sent me a link to a website maintained by the Fayette County Government [where Lexington is located] around 2002, in the very early days of internet. It was almost a novelty, seeing people in their worst moment. I quickly found a mugshot of someone I had been very close to in elementary school. The picture was just awful: as the viewer, I was doing exactly what this website wanted. I was in art school at the time [Washington University in St. Louis], studying the history of portraiture and how images function. It rewrote my visual understanding. Prior to that I’d never thought about mugshots. I had a lot of anger about the impossible culture-class reality that existed and what I experienced there. This just revealed it in the most plain, ugly way.

BP: The figure is almost secondary to the story in your portraits. Can you talk about the relationship between image and text in your work?

BD: When these ideas first started started percolating, I wanted a way to rewire my brain. Despite their large scale, I work as small and as slow as possible to allow for thinking — to meditate on these stories, these individuals, and my anger. My first drawing like this [Emily] was done back in college. The left side of her face was tick marks, just the most basic art in order to use the least amount of brain power. But halfway through the piece, I realized I could externalize that meditation by writing it out, so the right side of her face became text. At first, it was about creating an internal space for the thoughts, but then it became about creating an external space for the work. 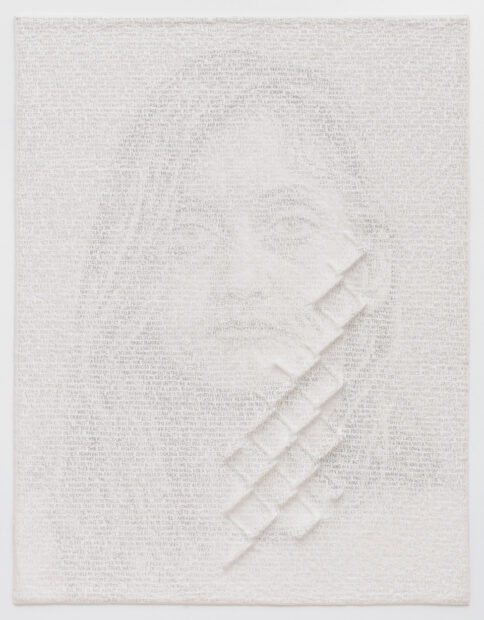 BP: I read that you also make your own paper?

BD: I felt, on an instinctual level, that I needed to find a way of working [writing and drawing] that mirrored the process of paper making—which is very physical and very meditative. Even though I’m making sheets of paper, the process is like casting. I just happen to be casting into an open 60 x 45-inch frame. Or in the case of these current works, a 37 x 28-inch frame. Then slapping the pulp while it’s still wet, getting the bubbles out to form the fibers together. It’s a thick, almost oatmeal consistency, shaped by hand; you can see the pattern of my fingers forming subtle ridges all across the sheet.

Also, the paper pushes back — it pushes back really hard. It distorts the image really dramatically in some cases. For instance, in this show, the chainlink fence permanently embedded just under the paper not only makes it nearly impossible to write or draw, it breaks down the image. That’s really key to me. I’m not interested in a straightforward depiction, or a direct transfer from my brain onto a surface. I want that friction, that pushback. I distrust the image and I distrust myself.

BP: Do you distrust the language, too?

BD: More than anything. I was trained as an artist and the writing came much later. I’ve done 30 Text Portraits with insane amounts of writing, but so little of it was legible. I wanted it that way: what I needed to reveal and what I needed to hold back. In the last few years, I’ve really been trying to pull the writing out, to mess with that balance between image and narrative. I’ve done a few pieces that consciously feature legible text, but in a lot of the large Text Portraits, it’s just some words here or there. Which is my intention — to create a sort of haphazard narrative. This show is the first where it’s entirely built around my desire to show that text. At some point I had to be honest with myself since, technically, I’m spending most of my time writing.

BD: [Ben laughs.] In all previous drawings, the writing was done entirely in front of the piece. That was the rule. This body of work is the first time it was written out beforehand. I made little books by hand, and I knew after the first one how many pages this scale would allow. So I created X number of these weird, rubber-banded stitched books. It was an attempt to avoid too much editing. Every once in a while there’s a section that’s scratched out. But it’s written in pencil, so still not trying to get into that mode of thinking while writing.

The saturation of text mimics the pushback you get from the mugshot. It’s about that image not giving you the story. The writing in those large Text Portraits is my earnest desire to write, remember, and hold those stories. But when the image-making begins, it switches — and it’s not pretty. At some point the image destroys the text. The scale, the layering of text, it creates a saturation of information that is so impossible for the viewer. You know it’s there, you can feel all of it, but it’s not accessible.

BP: These works are now more legible, but the image has become more porous… .

BD: Yes, but I prefer to call them muted. That process came about in wanting to maintain the text. I’ve described to you that transition from writing to destroying the writing. I’m always writing, even when I’m “destroying” the text, I’m layering text on top of text, so it’s the accumulation that’s destroying the narrative. But now, instead of layering text on top of text, I’m really just modulating the darkness of each letter form. Creating the image, not by layering, but thickening the line; darkening the letters that form an eyebrow, for instance. Letting the words maintain their integrity.

BP: Why did you decide to go smaller in scale with these six portraits?

BD: I wanted to make a document, almost like an ancient tablet. I still think they’re intimidating to the reader/viewer, even though the scale is more intimate. In art there is always this trading of attention: either trying to hold attention or redirect attention. Of course the mugshot is such a sick illustration of that. It’s designed to hold and direct attention in such a specific way. It succeeds as a tool of judgment, condemnation, and shame. I’m not trying to direct the viewer too much. Our brains are already quick to draw conclusions.

BP: Have any of your subjects contacted you?

BD: No. The divergence of our paths has become so clear. For better or for worse, I decided a long time ago to not connect that circle. To instead see the pieces as dangling threads. I used to expect, every day, that it would happen, and now I don’t expect that. I don’t know what it means, that I’m so confident now, of how many worlds exist in this country, even in a small city. 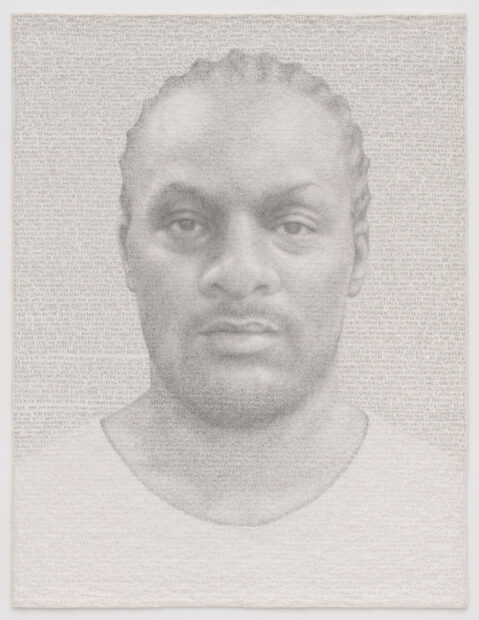 BP: Do you ever draw the same subject again, later on?

BD: This series is becoming about my aging. And their aging. What an arrest does, not to an 18-year old, but to a 38-year old… .  A series of arrests into adulthood, not just a singular event. You read a lot about the little towns and cities on the Ohio River hit hard by the opioid epidemic. Lexington is a part of that diagonal swath of the Appalachian Mountains. The group that’s getting arrested has shifted. It’s a much older population. They have jobs, families, have lived large chunks of their lives. It takes on a different story than a young kid in Kentucky getting arrested for drugs. That aspect is really prominent in these six pieces. Some never had prior arrests. I’ve previously drawn large Text Portraits of four of them. John, for instance, I had a show in 2017 where I approached his mugshot in three really different ways. He’s aged about 10 years. I remember John from middle school, he had juvenile court issues. It never stopped.

BP: How well did you know these individuals while growing up?

BD: Some were really close friends; some were the bullies in high school that I despised and who despised me. Some were the girls I lusted after in middle school. It ran the gamut. I’m fascinated by those childhood dynamics of bullying and ostracizing. Thematically, some pieces are about how awful this person was in childhood, and some pieces are about their hurt. The narrative becomes about seeing that other side. They were my world, and they’re the only way I know how to calculate the past. These figures are a way of mapping my childhood — to create a secondary reality of that city, as I experienced it as a kid. And how these people, who are still there, are experiencing it now. It’s a tribute: I feel nothing but the roughest form of respect for them.