It’s all well and good for artists to wear emotion on their sleeves, eschewing sarcasm and impenetrability for vulnerability and sweetness. It is heartening to see the artists arrayed in The New Sincerity at Lora Reynolds Gallery, many of whom are exhibiting in Texas for the first time, doing this and doing it without pretension. 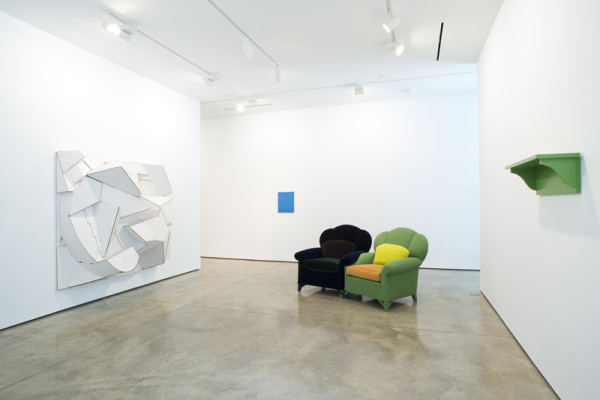 A dilemma with group exhibitions is the unevenness of the art, the potential for something to feel overshadowed by its neighbors or (worse still) blatantly out of place. The New Sincerity installs six artists’ works to activate the white-box gallery space, and it works as a group show partially due to the smart installation. Over the reception desk, Fabrice Samyn‘s gold-leaf void All Around greets visitors with shimmering emptiness. The large front gallery emulates a living room; Roy McMakin’s coupled easy chairs and ordinary green shelf are juxtaposed with subdued, framed-picture-sized canvases by Julia Rommel and Frome, Florian Baudrexel’s cardboard wall sculpture, scaled like a wide-screen TV. Pairing highly personal works by Samyn, Rommel, and Colby Bird with Rosy Keyser’s monumental Naturalist Graffiti Transfer Portrait (N.G.T.P1) in the back gallery also feels correct to me. You can’t simply peer around the corner; you must enter this space. 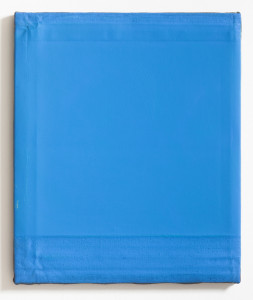 Rommel’s monochromes challenge stoic expectations on two levels. One: she titles them after personal memories, like Betterton (“Jewel of the Chesapeake,” says the beachfront town’s website) and Inner Tube. The paintings resemble their titles (Inner Tube‘s rubberiness, Betterton‘s Northeastern bay blue), further de-abstracting them. Two: Rommel’s method of stretching, framing, painting, and re-stretching her works ad infinitum imbues these solidly colored planes with ripples and folds, emphasizing the history of their making and the tactility of the final product. Ever look at the sides of paintings? You should with Rommel’s: the rainbow of previously used colors on Betterton and that gash of exposed wood risk looking like flaws, but she leaves them for us to see. 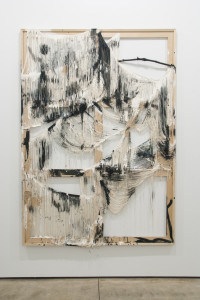 Rosy Keyser is deft in her laborious process as well, laying stretcher bars adorned with string fringes on a paint-soaked tarp and, after a time, uprighting the whole gloopy mess to coagulate or dangle with gravity’s unpredictable will. She could be commenting on life’s erratic nature, but I’m more convinced that her exploration of materials from her  Hudson Valley community grounds the work to that place. Despite having only spent about three weeks total in upstate New York, I sense where she’s coming from.

It seems clear that the artists are sincere in their motives, but if we as viewers can’t latch onto their emotion—however subjective it may be, our shared impressions will not gel. I identify with Keyser’s work, as I do with Bird’s manipulated photography. Bird’s Untitled Leisure trio, created by scanning, printing, and staining emulsion layers off Polaroid prints, glows with afternoon dormancy. My own routine of intense travel around the international art circuit, punctuated by periods of flaneur-ing, stands in stark contrast to the ordered regimen of my loved ones. Like Bird, I’ve questioned my lifestyle’s value. Bird converts quiet moments (like sleeping in late) into art to justify them, but are they then still enjoyable to him?

Baudrexel acknowledges fallibility in composing his angular wall relief with cardboard and big strips of opaque strapping tape. Preparing for a domestic move is a deviously stressful thing, and I’ve clocked hours comparing cardboard’s various rigidities and cobbling boxes together, so I appreciate this everyday workhorse in such a dynamically Futurist form. 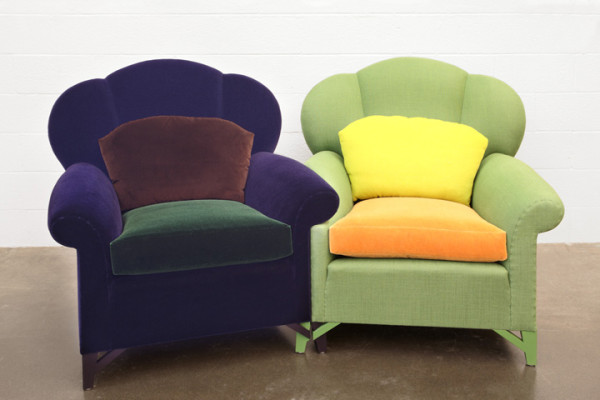 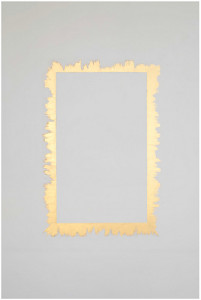 It took a second viewing for me to discern the compatibility between Roy McMakin’s partnered chairs (and, more broadly, his domestic motifs) and Fabrice Samyn’s light- and time-based oeuvre. The chairs are objects, as inviting to plop down in as they are to contemplate, while Samyn’s postcards and wall-painting seem to be seeking some higher calling. A second look showed that the gilded vintage postcards of Now (where the word “now” is the only part unobscured by gold leaf) are frozen in “the moment” —that breathtaking immediacy that is love and human contact. Likewise, McMakin’s easy chairs, although they can stand separately as autonomous units, are made to grow old in, together. While considering All Around, Samyn’s wall painting at the gallery entryway, I caught myself becoming attuned to the whiteness of the freshly painted wall within and around the gold leaf trim, rather than the burnished intervention itself. Perhaps this is the point: a deeper awareness of the shared space in which All Around and its neighboring artworks inhabit, the idea that outside this three-room shell their synergy would disappear. 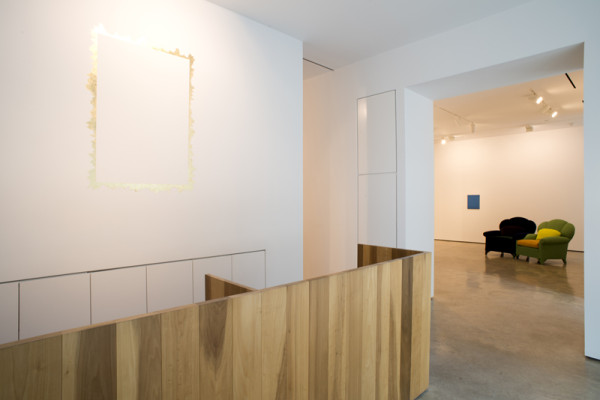 I feel myself getting all sentimental writing this. Ugh, but it’s a fine thing when art moves you. Individual experiences may vary when viewing this exhibition, but that’s the beauty of subjectivity. Just let it happen. I mean that sincerely.

Brian Fee is an art punk based currently in Austin, but he can usually be found in New York, Tokyo, or Berlin, depending on the art season.

The New Sincerity will be on view at Lora Reynolds Gallery through November 2, 2013.

Drawing Institutes: everybody’s got one! Menil DI gets...